German Chancellor Angela Merkel's call to axe EU membership talks with Turkey has been met with resistance from Finland and Lithuania at an EU ministers summit. A decision is unlikely to be made until next year. 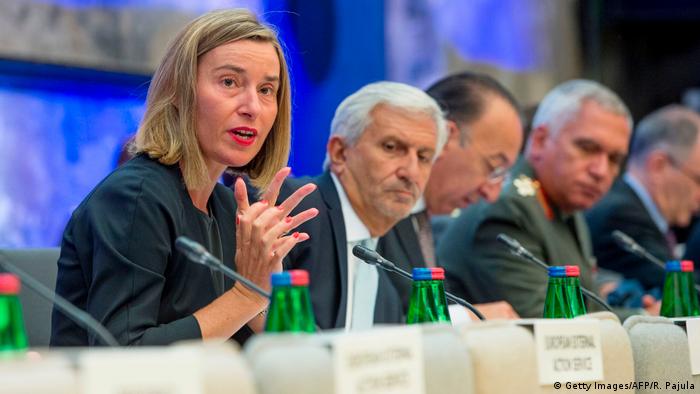 The European Commission is not expected to make an assessment on "whether and to what extent" Turkey is meeting the criteria for EU membership until next year, Estonia's top diplomat Sven Mikser told a meeting of EU foreign ministers on Thursday.

The remarks came after officials from Finland and Estonia said they were opposed to halting accession talks with Turkey. "We know that there are problems in Turkey when it comes to human rights," said Finnish top diplomat Timo Soini. "But I am not in favor of stopping negotiations," he said, adding that the only way to work out the problems was through dialogue with Ankara.

Read more: Can Merkel push the EU towards a new Turkey policy?

"We should continue the process and engagement. It's not easy but we have to value contacts," Lithuania's Foreign Minister Linas Linkevicius said. "By stopping, by cutting, we will not make a good thing because we will encourage them even more to go away. I think the effect would be the opposite than what we'd wish."

It marks a clear break with Berlin's wish to scrap accession negotiations. Chancellor Angela Merkel and her election challenger, Martin Schulz, both said during Sunday's televised debate that they were firmly against Turkish EU membership.

'Without regard for human rights'

German Foreign Minister Sigmar Gabriel echoed those remarks on Thursday at the EU ministers meeting in Tallinn. He accused Turkey of turning away from the EU "at breakneck speed" and without regard for human rights or rule of law. For a long time, Berlin "refused to respond to Turkey's provocations," even when Turkish President Recep Tayyip Erdogan "referred to us as Nazi Germany," said Gabriel.

Turkish authorities have detained a dozen German journalists and activistsand accused some 700 companies of "supporting terrorists." As a result, Germany cannot simply carry on "as if nothing had happened," Gabriel said.

Dutch Foreign Minister Bert Koenders said that while he agreed with Germany's call to also stop separate talks on upgrading the EU's customs union with Turkey, he suggested Berlin's stance would only become clear after the parliamentary vote later this month. "We will have to see what happens," Koenders said. "After the German elections will be the time for more discussions on this."

Turkey to remain an 'essential partner'

Estonia Defense Minister Sven Mikser, whose country currently holds the European Council's rotating presidency, said that come what may, Turkey would remain "a crucial EU partner across a variety of policy fields."

Mikser's comments reflected earlier warnings from French President Emmanuel Macron, who on a visit to Athens said the EU should "tread very carefully with Turkey."

In an interview with Greece's Kathimerini newspaper, Macron admitted that Ankara had "objectively distanced itself" from the EU in recent months with "alarming deviations that cannot remain without consequence."

However, France's centrist president said he wished to "avoid a rupture because (Turkey) is an essential partner in many crises we jointly face, specifically the migration challenge and the terrorist threat."

Accession talks between Brussels and Ankara have been running since 2005, albeit with little progress. However, in 2015 and 2016, relations between the EU and Turkey were given new life as the two sides negotiated a controversial deal that stemmed the flow migrants from the Middle East into Europe.

But relations eroded soon after as last year's failed coup attempt against the Erdogan government led to mass arrests, as well as purges against civil servants and military personnel.

Ending EU-accession talks would require a unanimous decision from all 27 EU member states, although suspending talks would only require a qualified majority of 16 votes.