The European Union has long feared popular Islamist revolutions on the Mediterranean, preferring undemocratic stability. But Tunisia's secular uprising has forced Europe to rethink its support for friendly dictators. 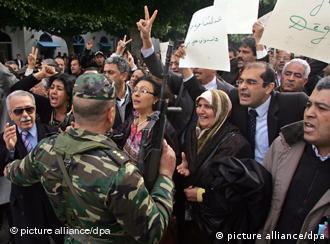 The French government was embarrassed this week. It was forced to admit that it had backed the wrong horse in Tunisia in the violent upheaval that ended with the removal of President Zine El Abidine Ben Ali.

Outrage was focussed on Foreign Minister Michele Alliot-Marie, who publicly offered Ben Ali "the world-renowned know-how of France's security forces" three days before he fled the country. He was subsequently refused refuge in France before being taken in by Saudi Arabia. 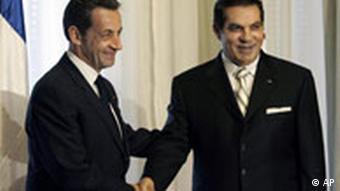 Ben Ali used to be a friend to France, now he's a pariah

Sarkozy has good reason not to be too tough on his foreign minister. On a visit to Tunisia back in 2008, he was full of praise for his host. Europe was led to believe that Ben Ali was a changed man: "Nowadays freedom is expanding in Tunisia," the diplomatic president said. After all, "How could I visit a country as a friend and then appoint myself as an advisor?"

Alliot-Marie defended her misguided offer afterwards: "Let's be honest: We were all - politicians, diplomats and researchers, journalists - surprised by the Jasmine Revolution (Tunisia's uprising - ed.)," she said.

This is certainly true, and Thomas Klau, head of the Paris office of the European Council on Foreign Relations (ECFR), is inclined to forgive the foreign minister's statement as a poorly-timed faux pas.

"She's new to the office, and it was seen by many in Paris as an indication that she hasn't quite mastered all the skills of a foreign minister," he told Deutsche Welle.

In fact, Klau points out that Alliot-Marie's offer merely embodied the position of the Sarkozy government before the revolution. Not just France, but the whole of the EU and the US: "I think the unspoken consensus in the EU was that it was better in the Arab world to have an authoritarian regime than a potentially unstable democracy."

Other foreign ministers were more skilled at adapting to the rapidly changing situation in Tunisia than their French counterpart, leaving Alliot-Marie out in the cold as the only one who revealed Europe's anti-democratic bias in Arab states.

Ben Judah, policy fellow in London's ECFR office, told Deutsche Welle, "We had this belief that supporting moderate, anti-Islamist regimes with trade was actually a guarantor of stability. I think that's been shown to be absent. What a regime needs to be truly stable is legitimacy, which Ben Ali didn't have."

The problem with democracy is that it is messy and difficult to control. "We've seen the difficulties that the electoral success of Hezbollah has raised for western politics in the Middle East," says Klau. "It's easy to call for free elections, but if these elections deliver a government that is actively hostile to legitimate European interests like security, then that creates a serious problem."

Some pundits have compared the EU's policy in the Arab states to that of the US's much-maligned foreign policy in Central America in the 1970s and 1980s, where democratic movements were suppressed in favor of stable, anti-communist dictators. The EU's fear of Islamist risings in countries like Tunisia, Libya and Egypt led it to ignore human rights records and sustain bloody and corrupt regimes.

But the fall of Ben Ali has changed the game. "This confronts the EU with a new situation," says Klau. "They will have to develop a new set of answers, because clearly the old line isn't good enough anymore."

It is the secular nature of the Tunisian revolution that has taken the EU by surprise. "We expected revolutions in some of these countries, but when it happened, it wasn't a revolution led by Islamists," says Judah. "It was led by young, secular, educated men who wanted visas and better job opportunities. We weren't correctly identifying what were the sources of instability, and what parts of society were disgruntled."

For all of Tunisia's status as a package holiday resort for Europeans and its economic growth, the wealth was clearly not reaching the well-educated population. People were desperate for food. "What has toppled this regime is actually the rise in commodity prices," says Judah. "Commodity prices are soaring right now - the price of bread, oil, coffee and so on. This is actually a far greater danger to the regime's survival than Islamism. We need to work out a policy that looks at the link between instability and commodity prices."

But though there are similar situations in Egypt and Libya, the fear that keeps other Middle Eastern dictators awake at night is not so likely to come about. "Politics in the Arab world is local," says Klau. "Political and economic conditions are very different from one country to the other, so I would be surprised if we saw the kind of domino effect we saw in Central and Eastern Europe as a result of the collapse of Soviet control."

"But on the other hand, Tunisia will certainly serve as an inspiration for others in the region. It won't be so much a domino effect, but a potential trend that might materialize in some countries and not in others."

All ministers in Tunisia's interim government have quit the party of ousted President Ben Ali following demands that it be dissolved. Relatives of Ben Ali have also been arrested for possessing state assets. (20.01.2011)

The French foreign minister has been criticized for offering to help Tunisian police during the country's uprising. But a Middle East expert tells Deutsche Welle that France's reaction shows wider EU hypocrisy. (18.01.2011)