French foreign minister defends offer of help to Tunisian ex-president | Europe| News and current affairs from around the continent | DW | 18.01.2011

The French foreign minister has been criticized for offering to help Tunisian police during the country's uprising. But a Middle East expert tells Deutsche Welle that France's reaction shows wider EU hypocrisy. 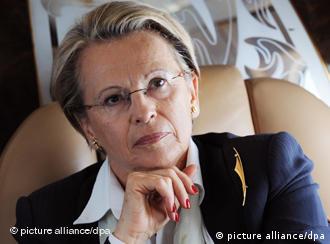 Alliot-Marie was called before the National Assembly

Alliot-Marie said at the height of the protests that France could share the expertise of its police with Tunisian security forces in "settling security situations of this type."

Her comments were quickly condemned by opposition politicians as an endorsement of the violent crackdown on the protests, which killed 78 people. Since then France has distanced itself from Ben Ali, denying him and his family exile and ordering French banks to freeze his assets. 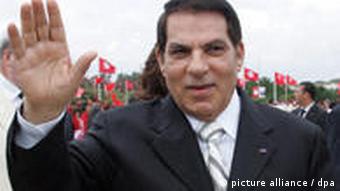 Ben Ali was forced into exile after days of violent protests

"I am scandalized that certain people have tried to distort my comments," Alliot-Marie told the National Assembly's foreign affairs commission Tuesday after being summoned.

"Let's be honest: We were all - politicians, diplomats, researchers, journalists - surprised by the Jasmine Revolution."

Like many Western nations, France had kept close ties with its former colony and had supported Ben Ali's secular government as a buffer against Islamic fundamentalists, whom they consider a threat to other North African countries.

Michael Lüders, independent political analyst and expert on Middle East politics, said Europe talks plenty about human rights, freedom and democracy. But its real priorities with Tunisia are cooperation on curbing immigration across the Mediterranean Sea and the fight against al Qaeda.

"In that respect these states have been very efficient, be they police states or not," he told Deutsche Welle.

Tough rhetoric from the West is mainly directed at Arab states that do not cooperate with it, like Syria and Iran, Lüders said. Other states in the region are tolerated or supported by the West, regardless of whether they are repressive police states or not.

"Of course it would be possible to put pressure on countries like Algeria, Libya or Egypt," he said. "But it is not being done."

The unrest in Tunesia grew from unemployment and government repression

Alliot-Marie's original offer of support to Ben Ali's forces was a serious miscalculation, Lüders said, and "she obviously had no concrete information" on how the protests were playing out.

But he said France was not the only one to miscalculate the effect the Tunisian government's repression would have on its people.

"I think in France, in Germany and in other countries, politicians have simply got used to realizing that there's no democracy in northern Africa," Lüders said. "We in Europe, we in the West, we don't care as long as we can do business."

Trade with EU not 'fundamentally wrong' 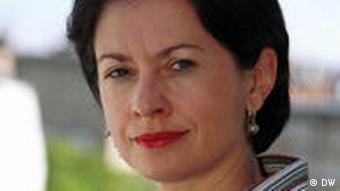 The European Union is Tunisia's biggest trading partner, accounting for more than 70 percent of the country's exports.

Barbara Lochbihler, a German Green Party member of the European Parliament and former general secretary for the German branch of Amnesty International, said the economic relationship between the EU and Tunisia must continue.

"Trade is never fundamentally wrong when it results in the betterment of the people," she said. "But we saw that despite this trade, many were left out of the prosperity.

Four ministers have already resigned from Tunisia's interim government. Police used tear gas as hundreds of people took to the streets to say that the new government too closely resembles the old one. (18.01.2011)

The ouster of Tunisia's leader has sent shockwaves around the Arab world as he was the first Arab leader in recent history to be forced out by street protests. European editorial comment is wary of the country's future. (17.01.2011)