Mealworms, whole or as powder in pasta, have become the first insect-based food approved by the EU's food safety watchdog. The EU Commission has yet to endorse the decision. 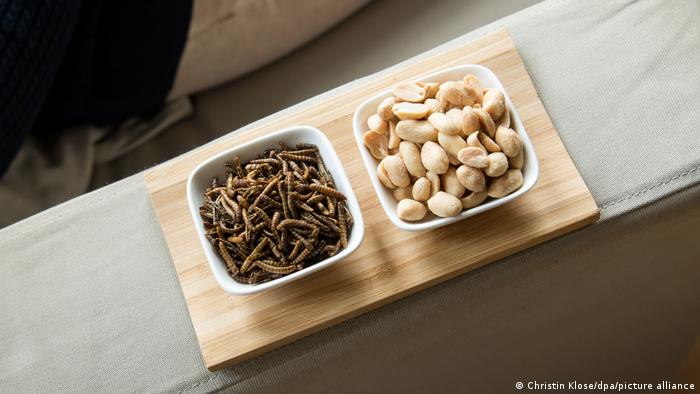 Mealworms got approval for EU plates Wednesday from the European Food Safety Agency (EFSA), based in Italy's city of Parma — better known for its tasty pasta, tomatoes, ham and cheese.

Actually larvae of the darkling beetle (Tenebrio molitor) and typically fed to pet reptiles and fish, the yellow grubs could soon be the first "novel food" cleared for sale across the EU, assuming the European Commission adds its endorsement.

Rich in protein, fat and fiber, they could be eaten whole or as a powdered ingredient in snacks and noodles, assuming their original fodder was free of contaminants, concluded the Italy-based EU agency.

EFSA food scientist Ermolaos Ververis said interest was high among the "edible insect sector" of the food industry and the scientific community.

Mealworms are the first species approved among 15 insects subjected to risk assessment procedures delegated to the EFSA in 2018 under a 2015 EU regulation.

The EFSA food agency has 156 applications for "novel food" on its plate. Those also include algae-derived edibles.

For many Europeans, eating insects still triggered a "yuck" reaction, said Giovanni Sogari, a consumer researcher at the University of Parma.

"With time and exposure, such attitudes can change," he speculated.

Elsewhere in the world, including Africa and Central America, chewing on insect crisps, cooking with them, even mealworm burgers, have long become norms, so-called entomophagy, alongside massive meat consumption blamed in part for climate change.

Around the world, thousands of insects are potential candidates —prompting the UN's Food and Agriculture Organization (FAO) in 2013 to speculate that "eating insects can help tackle food insecurity."

Fed even on bio-waste, insects used significantly less water than livestock, and could be farmed more easily, said the FAO.

Experts warn that some insect species could become extinct globally over the coming decades — largely due to habitat loss as land is converted to intensive agriculture, as well as urbanization and the use of pesticides.

The EU's EFSA cautioned Wednesday that insect proteins were sometimes overestimated and a watch had be kept for potential allergies.