EU demands inquiry after Israeli raid on ships, Turkey outraged | World | Breaking news and perspectives from around the globe | DW | 31.05.2010

The European Union has demanded Israel mount a "full inquiry" into the killing of at least 10 people after Israeli commandos boarded ships carrying pro-Palestinian activists and aid to the Gaza Strip. 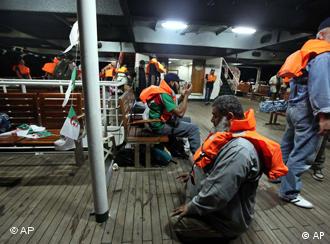 The European Union's foreign policy chief, Catherine Ashton, has called on Israeli authorities to launch a "full inquiry" into the killing of at least 10 people during a night raid on a convoy of aid ships destined for the Gaza Strip.

Ashton "extends her sympathies to the families of the dead and wounded and is demanding a full inquiry into the circumstances of how this event happened," a spokesman said Monday. "She reiterates the European Union's position regarding Gaza - the continued policy of closure is unacceptable and politically counterproductive."

The incident has been met with widespread condemnation from across Europe and at the United Nations Security Council, which has issued a formal demand for an impartial investigation.

"Every German government has always recognized and supported the right of Israel to defend itself, but this right must of course be within the boundaries of proportionality," Merkel's spokesman said. "At first glance it does not look like this basic rule was adhered to."

Germany's Foreign Minister Guido Westerwelle said he was "deeply concerned about the events last night in the waters off Gaza... these are disconcerting initial reports." French Foreign Minister Bernard Kouchner said "nothing can justify" the violence.

Ambassadors from the 27 EU member nations were to hold an emergency meeting Monday afternoon to discuss the incident.

Swedish Foreign Minister Carl Bildt on Monday said it was important to "quickly establish" what happened on the boats. He said he had summoned the Israeli ambassador to get more information.

He said that he had been in touch with Ashton, and that the EU must give "a clear response during the day when we get a clearer picture of what has happened."

Authorities in Spain and Greece have also summoned the Israeli ambassadors in their countries for information. Greek government officials announced that they would withdraw from planned joint military exercises with Israel in protest.

Turkey's foreign ministry warned of "irreparable consequences" after the incident and announced at midday that they would be recalling their ambassador to Israel. Some of the ships were sailing under Turkish flags and media reports indicate that Turkish nationals are among the dead.

"By targeting civilians, Israel has once again shown its disregard for human life and peaceful initiatives. We strongly condemn these inhumane practices of Israel," the Turkish Foreign Ministry said in a statement.

"This deplorable incident, which took place in open sees and constitutes a flagrant breach of international law, may lead to irreparable consequences in our bilateral relations."

Many of the injured were evacuated by helicopter to Israeli hospitals

Turkey has long been an important ally of Israel, one of only a few in the Muslim world. But relations have declined since Israel's attack on Gaza a year and a half ago, in which some 1,400 Palestinians died and of which Turkey was very critical.

On Monday, hundreds of demonstrators protested outside Israeli missions in Turkey. Some 400 demonstrators, some carrying Palestinian flags, gathered outside the Israeli consulate in Istanbul, as dozens of police stopped them from approaching the building.

"Israel, make no mistake, do not try our patience," chanted the crowd.

In another demonstration, a crowd of 150 to 200 people gathered outside the residence of Israeli ambassador Gabby Levy in Ankara shouting "Damn Israel" and reciting prayers. Dozens of police were on duty in front of the building.

The six-boat flotilla was organized by several groups, including a Turkish human rights organization, and was said to be carrying 10,000 tons of humanitarian aid, as well as pro-Palestinian activists. The ships were in international waters 124 kilometers off the coast of Israel when they were intercepted by the Israeli Navy and boarded by commandos.

Demonstrators on the ships clashed with the soldiers. The Israeli army said the demonstrators were armed with knives and clubs and that commandos opened fire after one person on the boat grabbed a weapon from a commando.

The death toll from the incident is unclear, but the Israeli military said more than ten activists had been killed and dozens of activists and soldiers were injured.

Israeli Trade Minister Binyamin Ben-Eliezer voiced "regret at all the fatalities," but added that soldiers had been "set upon with batons and tools," which forced them to defend themselves.

Hamas, the Islamist group which controls the Gaza Strip, issued a call for an "uprising" of Muslims and Arabs across the world.

Israel has imposed a blockade on Gaza since 2007, hoping to prevent weapons and bombmaking supplies from getting into the hands of militants.

But opponents of the measure and some nongovernmental organizations say the blockade has also prevented needed medical supplies and food from getting to the area, a claim Israel has denied.

Turkey's relationship with Israel in doubt after diplomatic rows

For more than a decade, Turkey and Israel have enjoyed a strategic relationship. But now their future as allies appears to be in doubt as Turkey sparks a series of diplomatic rows. (28.10.2009)