European Union defense ministers have taken a step towards agreeing on intensified military cooperation in the 27-nation bloc at a meeting in Belgium. The move could save billions from national defense budgets. 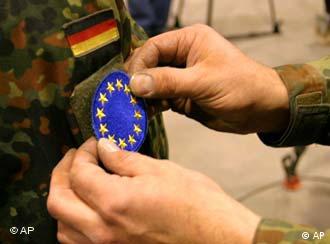 Increased cooperation could lead to a European army

European defense ministers meeting in Belgium have discussed the need to step up military and defense cooperation in a bid to cut billions of euros from domestic defense budgets.

German Defense Minister Karl-Theodor zu Guttenberg was among those who championed the idea of closer cooperation on defense at the meeting in the city of Ghent, but acknowledged that any such plan would face significant obstacles.

"We should join our forces more, but we also have to see the hurdles," Guttenberg said. "These are national hurdles. In Germany, for example, parliament has to agree to every foreign mission. While that has been a very good thing, it can also be an obstacle in the European context."

The proposal is that, in the future, EU countries could cut defense budgets in two ways: first, different member states could specialize in different aspects of defense, and second, the bloc could band together in the defense procurement process to secure better deals.

Guttenberg has also pushed his own three-step model to help aid such defense cooperation. The plan would first involve defining those domestic defense capabilities that were absolutely necessary for individual EU member states, then ascertaining the areas in which cooperation could bring savings, and, finally, allocating defense specialties to individual countries, which would then make their defense resources available to other EU members in the case of emergencies. 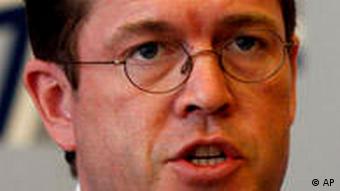 Christian Schmidt, parliamentary secretary at the German Defense Ministry, said on the sidelines of the ministers' meeting that the pressure on governments to cut costs had "led to the realization that we have a lot of common interests in Europe."

"There is a general consensus that in these current times we cannot afford to carry out operations at the same capacity nor as efficiently."

Guy Verhofstadt, who leads the liberal grouping in the European Parliament, went one step further, arguing for a common European army.

"And certainly, at a time when every European country has to make savings, maybe it's the right time to build up this common European army. There are two million soldiers in Europe, but only 300,000 in the US, and I think that the American army is more efficient that the European forces. So that's a good reason to start this." 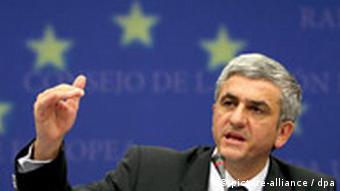 The French defense minister, Herve Morin, said that if Europe failed to boost defense cooperation, it risked becoming a puppet of the United States and China.

"At the rate we're going, we risk Europe gradually becoming a protectorate - 50 years from now we'll become a pawn in the balance between the new powers and we'll be under a joint dominion of China and America," Morin told reporters.

"All the countries of the world are re-arming and the Europeans, who already before the crisis had really weak budgets, have now carried out new reductions."

The French defense minister said EU states should formulate a list of defense capabilities that should remain under the control of individual states and those that should be shared.

Also on the agenda at the meeting was the ongoing conflict in Afghanistan. German Defense Minister Guttenberg said Germany intended to increase its efforts in training security forces in the country.

He said that as many as 1,600 soldiers could be performing this task by the end of October.

Afghanistan was top of the agenda as EU defense ministers gathered in the Belgian city of Ghent for an informal meeting on Friday. The US wants more European troops in Afghanistan, but this could prove a tall order. (24.09.2010)

Should Europe even try to speak with one voice on foreign policy?

European-American relations have dramatically improved since the election of President Obama. But the hope in Washington that the Lisbon Treaty would lead to a coherent EU foreign policy hasn't yet been fulfilled. (06.07.2010)

Polish Prime Minister Donald Tusk has won the 2010 Charlemagne Prize in Aachen. In an interview with Deutsche Welle he spoke about the future of the EU, about integration, expansion and the bloc's international role. (15.05.2010)