Three pesticides known to kill bees will continue to be banned following an EU court ruling. But the court did lift restrictions on the use of one pesticide, upholding a complaint from German chemical giant BASF. 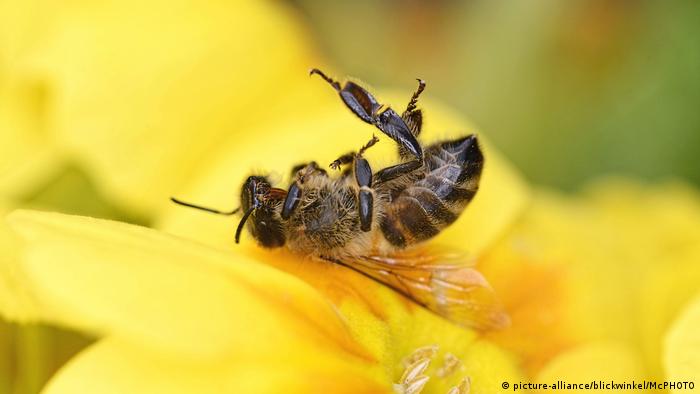 The General Court of the European Union on Thursday ruled in favor of upholding a partial ban on three insecticides that pose a threat to bee populations, but lifted restrictions on one pesticide after a complaint by chemical giant BASF.

The court dismissed cases brought forward by German chemical giant Bayer and Switzerland's Syngenta, both of which wanted to continue using the pesticides despite a decline in bee populations in recent years being linked to the use of pesticides in agriculture.

What the court said

"The ruling sets the EU's priorities straight — its primary duty is to protect people and nature, not company profit margins," said Franziska Achterberg of Greenpeace.

In a statement, Syngenta said the ruling was "disappointing and unfortunate."

"The evolution of modern farming technology and responsible, science-based environmental management is imperative if we are to sustainably produce affordable, safe and local food to feed more than 9 billion people by 2050 and take care of our planet," the statement said.

The court ruling can be appealed within two months before the European Court of Justice, the EU's top court.

What the banned pesticides are: The three insecticides that have been partially banned are neonicotinoids, a class of pesticides based on the chemical structure of nicotine, and they have been widely used in agriculture over the past 20 years.

Why neonicotinoids are bad: Unlike other pesticides that only affect the surface of plant, neonicotinoids are absorbed into the plants, meaning that they kill off aphids and grubs, and also have an impact on other insects as well. In February, the European Food Safety Authority released a report stating that "most uses" of the neonicotinoid pesticides posed a serious risk to bees.

Why bees are important: Bees play an essential role in the pollination of crops, so a decrease in numbers poses economic and food-supply concerns.

Possible recourse: The ruling can be appealed within two months before the European Court of Justice, the European Union's top tribunal.