EU concerned about strong euro | Europe | News and current affairs from around the continent | DW | 13.02.2013

EU finance ministers have expressed alarm that the euro is too strong and that a currency war could follow. Germany's Wolfgang Schäuble stressed his commitment to pressuring Europe to implement reforms. 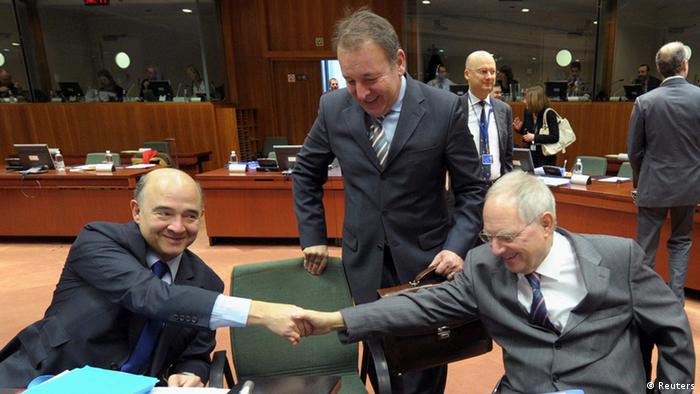 Eurozone countries are beginning to seriously worry about an overvalued euro currency. France, in particular, is concerned about its export industry should the euro become too expensive. French Finance Minister Pierre Moscovici insisted there should be coordinated action against erratic currency fluctuations as they endangered growth.

Moscovici quickly added, however, that "it was not about putting pressure on the European Central Bank or to call for inappropriate interventions." But the government in Paris does not seem to want to leave the euro's fate entirely up to the market.

No one else goes quite that far, at least not in public. But even EU Commissioner for Economic and Monetary Affairs Olli Rehn suggested that other market players might be keeping their currencies artificially low. "When exchange rates are a political tool to strengthen competitiveness, then this would go against the spirit of the G20," Rehn warned.

Southern European countries, especially, are struggling with economic difficulties and would suffer from a strong euro, as "their exports are more price-sensitive which could affect negatively the rebalancing process now under way in the eurozone," said Rehn.

Spanish Finance Minister Luis de Guindos stressed that "even with this exchange rate, Spanish exports are on the rise." Yet Spain has reason to portray itself in a rather positive light in order to dispel doubts about its capabilities to overcome the crisis.

EU representatives plan to raise the issue of exchange rates on the sidelines of next weekend's G20 summit in Moscow. And they see their concern confirmed by a recent G7 statement condemning a race of currency depreciation. 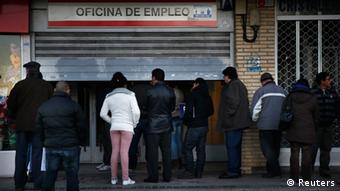 Unemployment remains a massive problem across much of the European Union

The nervousness of the past months has given way to a certain calm among the ministers. The time of ever rising interest rates for government bonds issued by troubled EU states appears to be over for now, thoughts of a breakup of the currency union are off the table and budget deficits seem to be getting fixed.

On the other hand, most states are still battling recession and rising unemployment. Commissioner Rehn is particularly concerned that the four largest EU countries - Germany, Britain, France and Italy - have in the last ten years lost some 2.5 million industrial workers to unemployment.

Since Germany was hardly affected by this, the trend therefore was even more drastic in the other three countries. "We have to turn around this downward trend. And we can do this if we stick to the reform path," Rehn said. Only then, can the European Union achieve sustainable growth and employment.

No reforms without pressure

German Finance Minister Wolfgang Schäuble was equally worried about waning pressure to implement reforms. "If you're on the right path you cannot just let things go. This is an uphill path." Schäuble is on the guard against anything that could break the reform spirit.

The idea of Eurobonds is just one of the things he sees as examples of what could slow down the reform efforts. So are plans for an EU-wide deposit guarantee. Both ideas have so far been blocked by Germany. Schäuble is also critical of plans to recapitalize banks through the ESM rescue fund, which, he believes, would lead to bank risks simply being transferred to the state. Negotiations about ESM aid for banks are currently under way.

Schäuble's press conference after the finance ministers' meeting almost seemed a bit like a keynote address on how to solve the crisis. "It is important that each country solves its problems. That is how we got Europe ahead and it's those efforts that we will help with."

But if countries were able to offload their problems, it would create the wrong incentives. "Without the relevant necessity – you might also call it pressure – no elected parliament in the world would implement structural reforms because they are always somewhat painful," Schäuble warned. Whether he is as blunt to those who hope to avoid exactly that kind of pressure is not known.

Euro zone finance ministers will let an independent commission examine charges of money laundering in Cyprus. Only then, they say, will they begin to think about an aid program for the highly indebted island country. (12.02.2013)

The EU heads of state and government have finally agreed on a seven-year budget for the 27-member bloc. But DW's Christoph Hasselbach says that by seeking to please everyone, the budget has set the wrong priorities. (08.02.2013)

EU leaders are arguing over the money needed for long-term projects. Everyone wants stable energy delivery, reliable transportation and high-speed Internet, but who should pay? (06.02.2013)