Germany's development minister has sparked a debate by calling for EU tariffs to be waived on African goods. Critics question whether import duties are really the issue, or are there other barriers to trade? 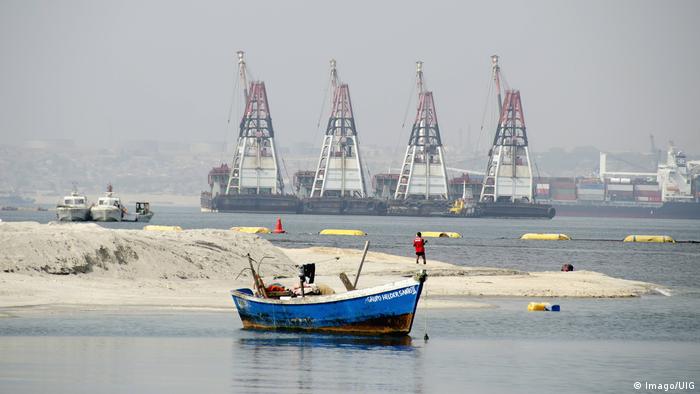 The European Union can boost development to and stem migrant flows from Africa by completely opening its market to the region, German Development Minister Gerd Müller said on Wednesday.

"Open the market for all African goods," Müller told Die Welt newspaper, adding that the European market is effectively closed to Africa at present.

Brussels has the power to "give the continent a new status — also politically," he said.

At the European level, Müller wants to see the introduction of an Africa Commissioner who will connect the numerous threads that make up the EU's Africa policy. He also called for an EU-Africa Council to meet regularly.

But above all, his call is about trade, where agricultural products from Africa are free to be imported into the EU duty and quota-free.

Müller, who is a politician for the Christian Social Union — the Bavarian sister party of Chancellor Angela Merkel's Christian Democrats — said he would work towards the creation of a new EU-Africa treaty in the two years leading up to Germany's presidency of the EU's executive body, the European Council, in 2020.

Each EU state assumes a six-month rotating presidency of the Council and Germany's turn will run from July to December 2020.

But within hours of the ideas being made public, they were rounded upon by his political opponents, and labeled a "smokescreen."

The chairman of the Bundestag's Committee for Economic Cooperation, Olaf in der Beek, of the business-friendly Free Democratic Party (FDP), said Müller "must stop talking and start acting," in an apparent sign of impatience at the speed of German-led plans to help boost Africa's economy, which he said had been mooted for three years.

The Green party's spokesman for development policy, Uwe Kekeritz, questioned why Müller was backing a free trade plan for Africa, when previously he backed the EU's Economic Partnership Agreements, which prevented such a market opening. The agreements created the intention to reduce trade tariffs on both sides, but have hit many roadblocks.

Roland Süss of the anti-globalization group Attac told the German daily Frankfurter Allgemeine Zeitung (FAZ) it would be difficult to achieve free trade between two continents that are so unequal.

He said many African states have reduced their tariffs on foreign goods — in some cases by up to 90 percent — which has just opened the floodgates to low-cost European products, many of which are heavily subsidized by the EU.

The EU forecasts that its agricultural subsidies will total €365 billion ($423 billion) between 2021 and 2027, while Brussels' entire European-Africa policy is worth just €39 billion a year.

Suss's response was backed up by Sahra Wagenknecht from the left-wing Linke Party, who agreed that the agriculture sectors at home and in Africa were suffering due to the EU-Africa trade deals.

"Instead of more free trade to create more reasons for migrants to leave, we finally need to stop plundering Africa's raw materials," she said, adding that "fair trade" was a more appropriate term.

Johannesburg — the Dubai of Africa?

Fall in imports from Africa

Despite duty-free imports (apart from arms and ammunition) already being in place from the 32 poorest countries in Africa and the 12 countries with which the EU has Economic Partnership Agreements, EU imports from Africa have fallen by almost 40 percent in recent years, according to the German development minister.

Müller believes it is not so much a problem of tariffs and import quotas, but other obstacles that make market access so difficult for African companies. In many cases, they produce goods that do not meet strict European quality standards, for example foodstuffs, he said.

European Parliament politician Elmar Brok of the CDU agrees that it is crucial to help African companies to meet the corresponding import conditions into the EU.

Aid money does more harm than good, believes Kenyan economics expert, James Shikwati. He says instead Africans have to tap into their biggest resource – the continent's 1.2 billion people and their skill as traders. (13.09.2017)

For the consumer it's sweet, for the farmer more bitter – the global price of cocoa fell in the last year and many producers are feeling the strain. (25.04.2018)