Following the recent EU-Western Balkans summit in Sofia, DW collated German internet comments on the prospective enlargement. How did people in the Western Balkans respond? 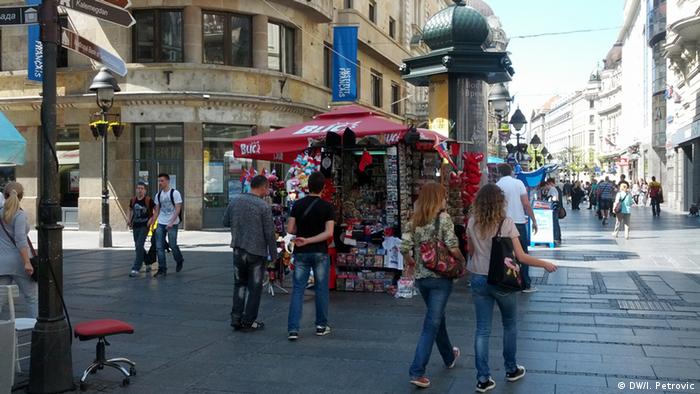 The possibility of the European Union inviting Western Balkan states to join the bloc has been controversial – not just in Brussels, but across the bloc and even in the potential new member states. Long a region of shifting alliances, what do people from the Western Balkans now make of German sentiments about the prospective EU enlargement? DW wanted to find out. So it translated some 50 German-language comments on a German television report about the recent EU-Western Balkans summit in Sofia. And subsequently published them in a Serbian piece titled "Who wants to join the EU?" Not one of the 50 comments support the West Balkan states joining the bloc. On the contrary. For example, one user by the name of Adeberg C. wrote: "The EU train rolls on. Next stop: Balkans. And Germans have to pay the price."

Serbs worry there's little to gain in the EU

The DW article garnered plenty of attention. So much, in fact, that Serbia's popular radio station B92 opted to place it on its own website. For two days, it remained the platform's most commented piece. With most readers voicing criticism.

A user going by the name "srrrrrrrrrdjan" wrote: "Germany gets much more out of the EU than it contributes. That's why all over Europe populist parties are on the rise that oppose Germany extending its (economic and political) talons. Germany isn't developing Serbia and the Balkans because it feels connected to us, but because it wants to increase its influence and make more money."

"We don't want to join the EU – and they won't let us in!" wrote a user called "Europejac" ("European") on Serbia's most-read news platform Blic ("blitz"), which also chose to publish DW's article featuring Germans' comments on the possible EU enlargement.

On the same platform, a commentator with username "Boki" said that "our politicians pretend the EU is like a big banquet with plenty of food and drink. But in reality, the servers have stopped bringing anything more to eat or drink. Those who came first took everything. And Croatia, Bulgaria and Romania are left with crumbs because they arrived late. They would only let us join to collect and clean the dirty dishes."

Whereas a commentator by the name of "Vida" empathized with Germans rejecting EU enlargement: "As a German, I would say the same. They are distancing themselves from prospective EU members that are economically weak."

"Serbs don't want to join the EU, they're are already doing very well. Why would they want to migrate legally to work in Germany or France, when unreported employment is much better for them?" asked user "Pera" on the same platform.

And "Svi to znamo"("We all know that") wrote that "the whole world knows we don't belong in the EU, only our dictator [a reference to Serbian President Aleksander Vucic] fails to understand that."

While user "Ivan" made the following suggestion: "They don't want us? So be it. Call Putin and tell him he can station ballistic missiles on our territory."

The DW piece was also published on Montenegro's biggest news platform Vijesti ("news"). One reader commented: "The text shows that they already see us as second-class EU citizens," while another claimed that "Our president [Milo Djukanovic] will rid them of their skepticism! And regarding the German comments: These are people who hate themselves in the morning, and the rest of the world by the afternoon!"

While one user going by "Cheese" expressed certainty that: "by 2025, the EU will either collapse, or be cut down to member states that have become fiscally consolidated. It's obvious that the European Union is about to end." "The Western Balkan states joining the EU is illusory," wrote DW journalist Christoph Hasselbach in light of the recent Sofia summit. On DW's Albanian-language Facebook page, which is read by Albanians, Macedonians and Kosovars, one user replied to Hasselbach's comment, saying that "it's not illusory – already today millions of people from the West Balkans live in the EU."

But not many on Facebook seemed to agree with this user. Another comment from user "E.S." replied: "Apart from Germany and France, no other country deserves being in the EU." And user "K.L." expressed the concerns of many Western Balkan citizens when noting: "We should not join the EU because we're not competitive. It will get worse for us when we're part of the EU because we will surrender the last bit of independence that we still have."

DW's collection of translated comments was also published on Bosnia and Herzegovina's Nezavisne novine platform. One user, by the name of "Dekan" said: "They don't want more Islamic fundamentalists," whereas user "R.K."wrote on the Bosnian DW Facebook page "Okay, they don't want the West Balkans joining, which is legitimate. But why are they outraged by and oppose the influence of Russia, Turkey and China?"

User "I.S." was certain: "The Europeans never wanted us – they only want our workforce."

But user "M.U." was confused: "They could afford taking in Croatia, Greece, Bulgaria, Hungary and Poland. But are they really any better than us?"

While another user was skeptical: "It is clear what Europeans think of the West Balkans when you see that they were more willing to let millions of African and Middle Eastern and other refugees in – who don't have any passports or other documents that show who they are – than accept us."