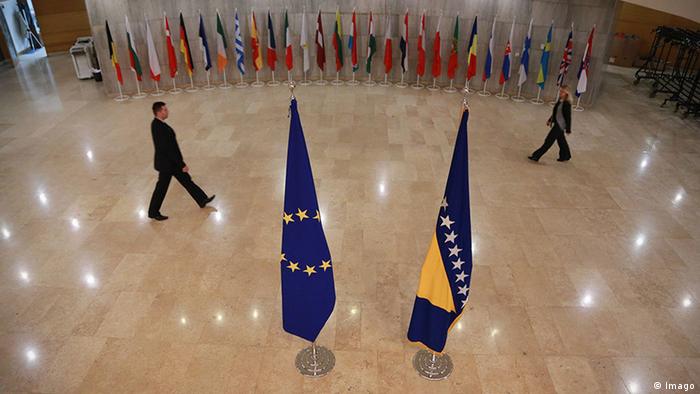 The European Union's 28 member states on Tuesday accepted Bosnia and Herzegovina's membership application and ordered the bloc's executive to prepare an assessment of the Balkan country's readiness to join the bloc.

The European Commission will now determine whether Bosnia meets criteria to become a candidate country, a process that could take a year. The Commission will outline what conditions Bosnia would need to meet before reaching full membership, which is likely to be a drawn-out and complicated process for Sarajevo.

Bosnia submitted the application in February.

A senior Slovak foreign ministry official, Ivan Korcok, whose country holds the rotating EU presidency, said "this is a good day for Bosnia, but for us as well. We are showing that the enlargement strategy and approach to the aspiring countries works."

The Commission will send a questionnaire asking for answers to thousands of queries on the country's suitability to join the EU. It will assess Bosnia's economy, compliance with human rights and the rule of law and other obligations of a member state.

Bosnia's membership process is particularly complicated given the legacy of the 1990s war during the breakup of the former Yugoslavia.

The Dayton accords that ended the war divided the country into two autonomous zones, one controlled by Bosniaks and Croats and another by Serbs. Each ethnic group is also granted a seat on the country's tripartite presidency.

The governance structure makes passing reforms and getting anything done complicated and slow, which in turn has hampered economic growth.

Over the last 14 months, Bosnia has been working to pass reforms to improve the country's economic prospects. The EU member states said Bosnia should maintain its reform agenda, including "socio-economic reforms, reforms in the area of rule of law and public administration."

Prime Minister Denis Zvizdic said the acceptance of the country's application constituted a "historic moment for the European path and European future of Bosnia-Herzegovina."

"This is really some of the most positive news for Bosnia-Herzegovina ... especially for young people," he said.

Serbia Foreign Minister Ivica Dacic: 'I hope the EU will survive until we're ready to join'

Serbian Foreign Minister Ivica Dacic says the EU promotes cooperation between the Balkan countries. He also maintains that Serbia is a stabilizing force - although it refuses to recognize the independence of Kosovo. (09.09.2016)

Bosnia and Herzegovina is considered to be one of the most heavily land mine-infested countries in the world. Former soldiers are often employed to clear the mines. DW's Mehmed Smajic spoke to some of them. (31.08.2016)

It was a party for peace: On July 28, 1991, thousands attended a concert in Sarajevo to protest an impending war. Author Danijel Visevic is looking for people that were there and willing to share their stories. (27.07.2016)