Ethiopia's Oromia region is volatile ahead of elections

The nature of this article is such that it violates restrictions placed on the media by the Electoral Commission of Ethiopia with effect on June, 17 under a four-day "Period of Silence". 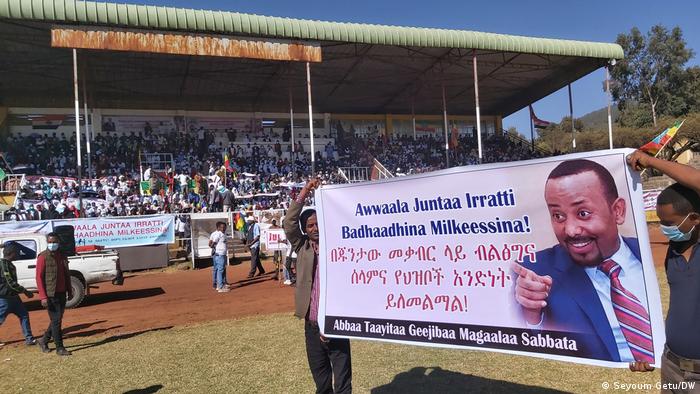 With little statewide competition, the prime minister's PP has an advantage in Oromia

Prime Minister Abiy Ahmed's home region, Oromia, could be one of the hot spots during Ethiopia's upcoming regional and parliamentary election. Outbreaks of violence have created an atmosphere of instability.

Kidane Bekele is a farmer and community leader in a small village of 2,000 people. With elections approaching, he spends his evenings guarding polling stations and surrounding areas, a rifle slung over his shoulder.

Every night after dinner, he puts on the khaki uniform of Oromia's militia and makes his way to the small compound of the election station, where three other men already stand guard.

"This militia is needed and watches out in order for our election to be democratic, trustworthy and stable," Kidane said.

His village has been peaceful so far, but frequent episodes of violence have led to a climate of fear, as well as interethnic conflicts elsewhere in Oromia, particularly in the western districts of Ethiopia's largest and most populous state. Civilians have been killed and displaced. Material damage to polling stations has been reported more than once.

As the elections approach, there has been increased activity by the Oromo Liberation Army (OLA), the armed faction that split from the Oromo Liberation Front (OLF), one of the main opposition parties in the region. The OLA, which considers the current government illegitimate, has been accused of fomenting violence, including targeted killings and kidnappings.

On May 6, Ethiopia's Parliament designated the OLA — along with the Tigray People's Liberation Front (TPLF), which is now battling government forces in the north — as a terrorist organization. But the group still seems to enjoy broad popular support, particularly in rural areas in western Oromia. This has led to several clashes between the OLA and government forces, reinforcing exacerbating the insecurity.

"The OLA is intent on causing maximum disruption to this election as it believes that the government is illegitimate and therefore the vote is illegitimate," said William Davison, the senior Ethiopia analyst at the International Crisis Group. "The group's intention is therefore to use armed struggle to try and prevent polling taking place in as much of Oromia as possible. This has led to an increasingly ruthless counterinsurgency response from the authorities, which are dedicated to holding this election as planned."

In the current context, several districts in Oromia and elsewhere will not be able to hold voting under the requirements of the the National Electoral Board of Ethiopia. In total, 64 constituencies will not participate in the vote on June 21, in addition to Tigray.

Tigray in grip of famine

Both the OLF and the allied Oromo Federalist Congress (OFC), have decided to withdraw from the election. Opposition leaders — some of whom used to be close allies to the prime minister, such as the OFC activist Jawar Mohammed — are behind bars on terrorism charges. The parties accuse the government and ruling party of intimidating opposition candidates and closing down party offices across Oromia.

"The ruling-party government cut our relationship with our members, our supporters and the public," said Tiruneh Gamta, the OFC's chief of office. "We couldn't make any communication. We couldn't move. We couldn't drive to the rural areas to tell our policies, to tell our programs."

The prime minister's Prosperity Party (PP) now only faces one real opponent in Oromia. Ethiopian Citizens for Social Justice (EZeMa) have managed to field 48 candidates for the national Parliament in the state — below the party's initial target.

"As a party, most of the challenges we are facing come from Oromia," said Yared Alemayehu, EZeMa's youth representative. "There are many parliamentary and regional seats we wanted to compete for, but we couldn't. ... Prosperity Party Members were telling them not to run: They were creating so many obstacles."

Although the prime minister has lost the overwhelming support of the Oromo youth, who propelled him to power in 2018, the PP — which replaced Abiy's Ethiopian People's Revolutionary Democratic Front coalition — is almost sure to win.

"Whether you believe the opposition complaints or not about government repression, it has clearly created a very unsatisfactory electoral situation in Oromia," Davison said.

Oromia's youth have expressed emotions ranging from disinterest to distrust. "There is a political clash, and, because of the instability, there is a humanitarian crisis, too," said Dinek Semu, who was seated at a plastic table as he ate his breakfast in the town of Sendafa, about 35 kilometers (20 miles) northeast of Ethiopia's capital, Addis Ababa. "That's why it's difficult to trust the election." Near him, his friends were playing backgammon with beer caps, answering with a simple head shake when asked if they would be casting a ballot.

Despite these critical voices, Abiy can still count on considerable pockets of support throughout his home region — especially around the city of Jimma. An orange-earth road lined with lush vegetation leads to his birthplace, a small village called Beshasha, where local administrators say almost all residents have come to register for the elections.

"Based on the work he has achieved, we believe that [the Prosperity] party can transform this country," said Taoufik a young man participating in a pro-Abiy rally a few kilometers from Beshasha. "The work he did until now shows that he can bring a lot of things for our future. We believe this party equalizes our nations and nationalities." Taoufik said it was the second such event he had taken part in.

Similarly, in Agaro, where Abiy spent most of his high school years, support for the prime minister runs deep. "He is a great leader and knowledgeable person," said Abdo, a former teacher who know acts as a traditional leader. "He is loved by his people, and I witnessed this throughout my entire life. He built a hospital, health center and roads for the people, as well as a recreational place for youth."

On every door, a print of a light bulb, the PP's logo, is proudly showcased. Huge posters featuring a smiling prime minister line the roads, including in the smallest towns. In Jimma, restaurants, shopkeepers and hotels are also participating in this campaign, but it's unclear to what extent these initiatives are spontaneous or encouraged by the local administration offices, mostly run by PP members.

Abiy has seen a surge of support nationwide linked to his so-called law enforcement operation in the northern region of Tigray, where the conflict between the TPLF and the federal army, backed by Eritrean soldiers, has been raging since last November.

The entire Tigray region is excluded from the election. There, residents see the vote as derisory in the light of the grave humanitarian crisis unfolding.

In Addis Ababa, the government is promising to solve all issues linked to Tigray, Oromia and beyond after securing its long-sought legitimacy in the elections. Many Ethiopians, however, remain skeptical.

"It's not going to solve the dispute that's led to civil war in Tigray, it's not going to bring an end to the OLA insurgency in Oromia, it is not going to resolve the violence in Benishangul-Gumuz," Davison said. "But it may well allow the prime minister and his ruling party to claim a democratic mandate, which would set them up for the next five years to pursue their agenda."