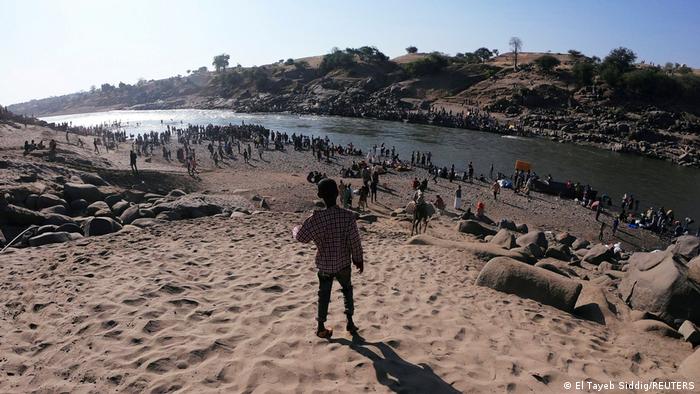 Brussels is withholding nearly 90 million euros ($109 million) in budget support payments due before the end of the year to Ethiopia because of the conflict in the northern Tigray region.

An EU spokesperson confirmed to DW that under the current circumstances, the EU is not in a position to deliver budget support as foreseen. "We need to see certain conditions fulfilled by the Government of Ethiopia for EU Budget Support to resume," the EU spokesperson said in a statement.

Some of the conditions include: Granting full humanitarian access for relief workers, access for civilians seeking refuge in neighbouring countries, an end to ethnically targeted measures and hate speech, and restoring communication lines and media access in the Tigray region.

The decision to postpone the funding does not affect EU humanitarian programmes on the ground or other development actions, which will continue to be implemented, the EU spokesperson said.

Tigray cut off from rest of Ethiopia

There is little information about the situation in Shire, a town in Ethiopia's northern Tigray region.

Organizations can only speculate about the extent of casualties and material damage after clashes between the Tigray People's Liberation Front (TPLF) and federal forces. 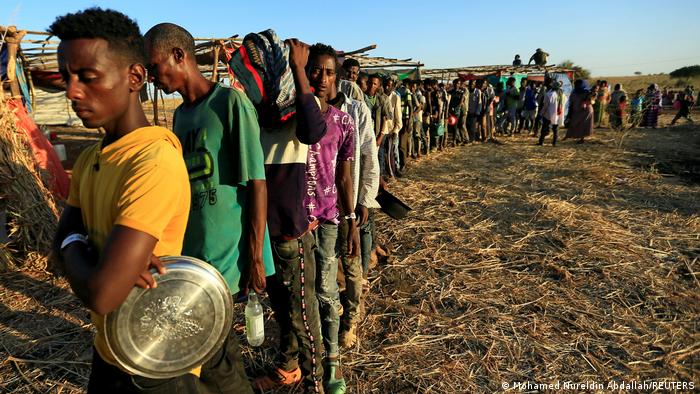 But when Semira's* relative was able to escape the town thanks to his Saudi Arabian ID, he brought bad news with him. Five of their family members died after being shot.

"It had been a long time since I last saw my father cry," said Semira, who is half Tigrayan, half Eritrean.

"The people that I know, they hate the TPLF. But now they want the TPLF to win. They want them to take over the power. Even people who had hope in [Ethiopia's prime minister, Abiy Ahmed]. For now, we only heard about five people, we don't know about the others. There are young people of whom we don't know where they are, they are fighting."

Fighting between the federal government and the TPLF started early November.

The Tigray region of Ethiopia has been almost entirely shut off from the rest of the world since fighting broke out. Communications were partially restored in the Western part of the region a few weeks ago, and in and around Tigray's capital, Mekele, on Sunday.

This came as a relief for families who were able to reconnect after almost six weeks of silence and uncertainty.

But for the rest — the North and Central areas —  questions linger.

The UN Security Council on Monday held an informal meeting on the humanitarian situation in Ethiopia's Tigray region, where the majority of humanitarian organizations are not allowed to enter.

A humanitarian crisis is unfolding on such a scale that organizations are afraid of what they will find once allowed in. Reports about civilian casualties are becoming more frequent, contradicting claims by both the TPLF and the government that no harm has been caused to civilians.

The UN's humanitarian body is preparing for an estimated 1.1 million people who are in need of humanitarian assistance, in addition to the 600,000 people who were already depending on food aid. Hundreds of thousands are believed to be internally displaced, and food rations have run out.

So far, almost no humanitarian access has been granted despite a November agreement between the Ethiopian government and UN agencies allowing aid into government-controlled areas of Tigray.

The International Committee of the Red Cross (ICRC) was one of the only humanitarian organizations to finally be allowed into the region's capital, where the prime minister paid a visit on Sunday.

"We have sent seven trucks to Mekele to transport medical items and relief supplies," explained Zewdu Ayalew, head of communications for the ICRC delegation in Ethiopia.

"The wounded and the sick people were not in a position to get proper medication, and the hospital was forced to suspend services in its intensive care unit and other routine medical services."

Power has now been restored, and Mekele's health facilities are able to slowly resume their services.

But the ICRC has been an exception so far. 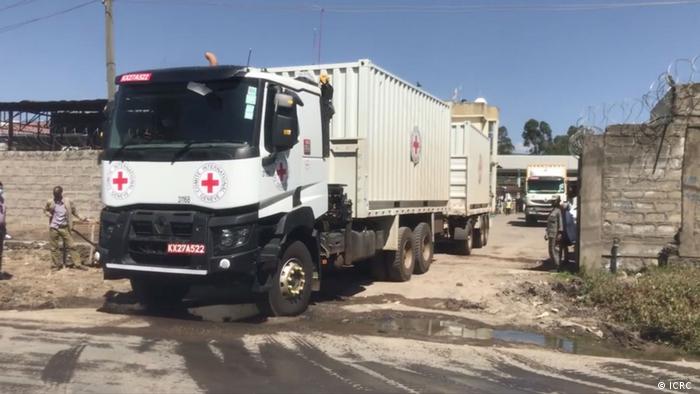 A convoy carries medical and relief supplies to the Tigray State capital, Mekelle

Ethiopia "doesn't need a babysitter," Redwan Hussein, spokesman for the emergency task force, said in a press conference with regards to humanitarian access. He accused the UN of not cooperating after the agreement was signed on November 29.

Early in December, four UN staff members were shot at by federal forces during an assessment visit. The government said this occurred after the staff broke through two checkpoints leading up to a refugee camp.

This incident "highlights the complex situation we have now in Tigray and the need for us to have safe, unconditional and free access to the area to make sure that we can assist people there," according to Saviano Abreu, a spokesperson for the UN's humanitarian coordination office (OCHA). 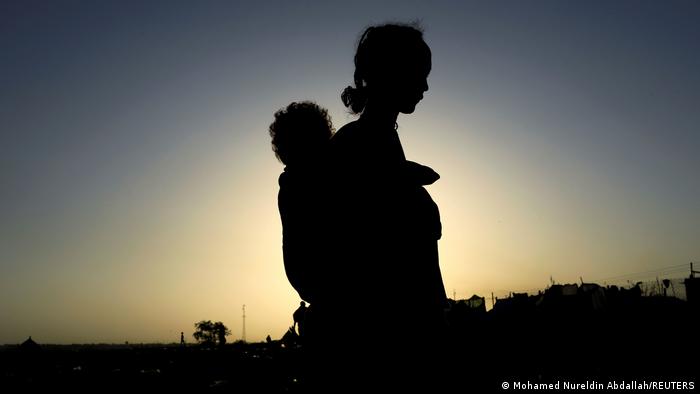 Reaching all people in need

Negotiations are still underway between the UN, the government and other humanitarian actors, but it's unlikely that unfettered access will be granted in the near future.

"This agreement says the UN, and other organizations who are taking care of refugees, have unlimited access to this region," explained Chris Melzer, the UNHCR spokesperson in Ethiopia.

In reality, the agreement granted access in areas controlled by the federal army, and "only when the government allows that every single step. Ethiopia is a host country, we are guests here, and of course, we will respect the law of Ethiopia. But we really hope that the government of Ethiopia also sees the need to help these people in the Tigray region," Chris Melzer stressed. 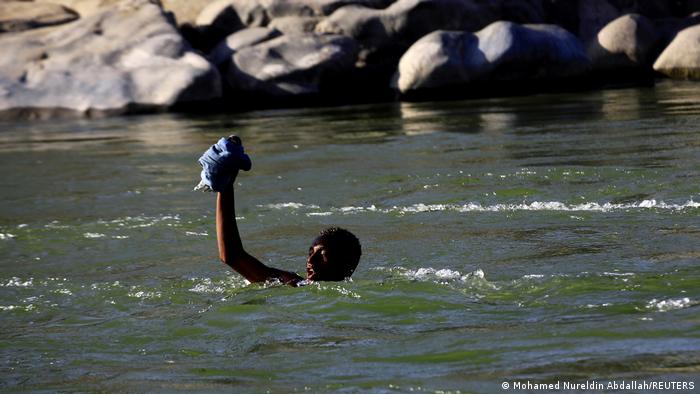 Impatience is growing among humanitarian organizations, which are increasingly frustrated at the impossibility of carrying out their missions.

Internally displaced persons are of particular concern. They are likely to be scattered around rural areas after fleeing the fighting and could therefore be very difficult to reach.

Some NGOs fear food supplies might become stranded in main towns, such as Mekele or Shire, without access away from the main roads.

"People impacted by conflict must be assisted without distinction of any kind, other than the urgency of their needs," OCHA's Saviano Abreu insisted.

The case of Eritrean refugees

Concern is also growing for refugee populations in Tigray. The region is home to about 96,000 Eritrean refugees, who are heavily dependent on aid and could be a target in the conflict, where, according to several sources, Eritrean troops have taken part in hostilities. The Ethiopian government has repeatedly denied these claims.

So far, the UNHCR has not been able to provide help to the four refugee camps in the region. Delivery of food and other items, which usually take place every four weeks, stopped early November. Camps have been left without supplies for over one week.

Hundreds of Eritrean refugees have fled camps in the region and were able to escape to Addis Ababa or Gondar. But on Friday the government said it is "safely returning refugees to their respective camps," providing assurance that food aid was on its way. 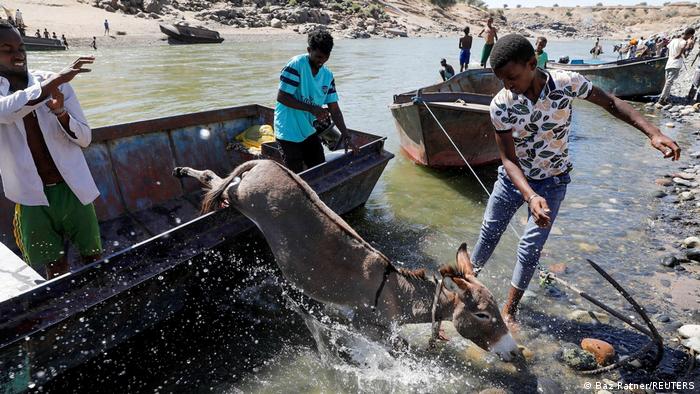 "We are talking about families, about elderly people, about children who were born just weeks ago, months ago. We are concerned the situation is not really suitable for refugees there. Refugees fled this region for good reasons," said Chris Melzer.

"On the other hand as soon as the government thinks the situation is safe now for the refugees, we think it must also be safe enough for the refugee helpers, and that's why we think that very soon we can go back to the refugee camps."

Ensuring safety for humanitarian staff will be no easy task. It's unclear under what circumstances employees of the Danish Refugee Council and the International Rescue Committee were killed in November, and fighting is still being reported in some areas.

There are also fears of ethnic profiling — Tigrayan humanitarian workers have received repeated threats — but non-Tigrayans could expose themselves to other risks.

Organizations are nonetheless determined to do their best at providing assistance for thousands who are waiting in despair.

"My family is lucky, they had somewhere to go, they had someone to be with. But what about those who don't have anything?" Semira asked.

Despite the fear, she decided to speak up, especially on social media. She worries about the fate of the region, especially Shire, her father's birthplace.

"Why can't they [humanitarians] go there? This is the question. I feel like they burned this city to the ground," she whispered, in tears.

*DW has changed the name of the interviewee for their safety.