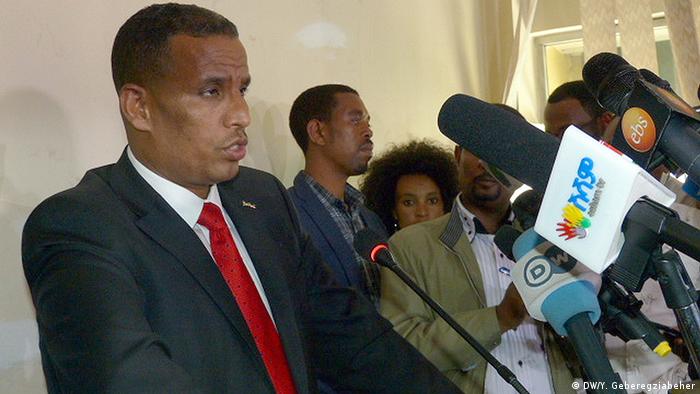 The high-profile arrests are the outcome of a five-month investigation ordered by Prime Minister Abiy Ahmed, who since coming to power in April has pressed a number of political, diplomatic and economic reforms.

Attorney General Berhanu Tsegaye said arrest warrants were issued for 36 security officials for committing abuses, while 30 others from the military-run conglomerate Metals and Engineering Corporation (METEC) were accused of corruption.

The security officials are accused of abuses at prisons, including "beatings, forced confessions, sodomy, rape, electrocution and even killings," Berhanu said.

Meanwhile, at METEC there has been corruption in procurement practices, the attorney general said.

"METEC officials were involved in purchases of $2 billion (€1.8 billion) worth of goods without any bidding process," Berhanu said.

Berhanu also said senior security officials were involved in a June grenade attack that killed two people at a rally in Addis Ababa shortly after Abiy left the stage.

In September, five people belonging to the Oromo Liberation Front, a group Abiy had pardoned along with thousands of others, were arrested for the attack.

"The evidence we gathered shows that the senior leadership of the national security agency instructed Oromos to carry out the attack because it would mean that the prime minister — an Oromo — was killed by Oromos," the attorney general told a press conference. "It would (also) give the impression that he is not endorsed by the Oromo population."

Berhanu called for Getachew Assefa, the former intelligence chief, to turn himself in and said that several suspects had fled Ethiopia or were in hiding.

Ethiopia's government has traditionally been dominated by the Tigrayan ethnic group, despite there being more than 80 ethnic groups in the country. Abiy is the ruling EPRDF's first Oromo leader.

Abiy's reforms have challenged the security services and upended longstanding power structures in place since the EPRDF came to power in 1991.

During his short rule, Abiy has loosened political restrictions, allowed greater media freedom and made peace with Eritrea. He has also vowed to open state-run sectors of the economy to investors and recognized security services' past brutality.

Newspapers for rent, but who's buying in Ethiopia?

Amnesty International welcomed the arrest of security officials for abuses.

"These arrests are an important first step toward ensuring full accountability for the abuses that have dogged the country for several decades," said Joan Nyanyuki, Amnesty International's East Africa Director. "Many of these officials were at the helm of government agencies infamous for perpetrating gross human rights violations, such as torture and the arbitrary detention of people, including in secret facilities. We urge the government of Prime Minister Abiy to take further steps to ensure justice and accountability for all past human rights violations and abuses, while at the same time ensuring all the individuals arrested receive fair trials."

After over 30 years of conflict, Ethiopia has secured a peace agreement with the separatist ONLF group. The deal opens up a political path for ONLF to push for the rights of ethnic Somalis in eastern Ethiopia. (22.10.2018)

Ethiopians have been reminded of life before Prime Minister Abiy Ahmed. Out of nowhere, mobile internet services were shut down across the capital and not a word about it on the national broadcaster. (11.10.2018)