'MoAuba' upset the odds in the FIFA eWorld Cup Grand Final to beat reigning titleholder 'Rogue Msdossary' in London. The Werder Bremen gamer is the first German to claim a world title in competitive FIFA. 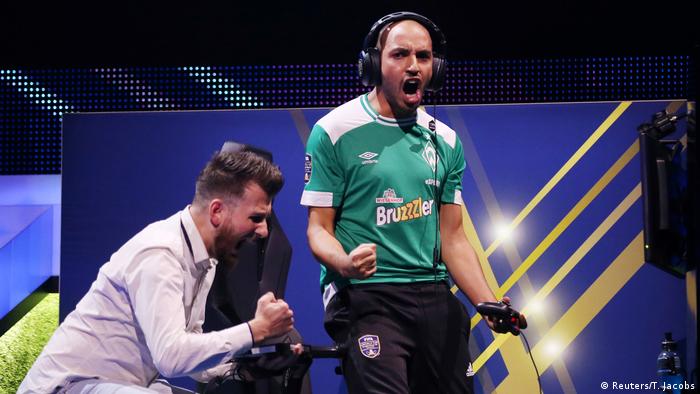 The end of the competitive FIFA 19 campaign lived up to its billing as Mohammed 'MoAuba' Harkous became the first German gamer to claim a FIFA world title and $250,000 in prize money.

The Werder Bremen gamer beat 2018 FIFA eWorld Cup winner Aldossary 'Rogue Msdossary' Mosaad 3-2 on aggregate as the Playstation prevailed over the Xbox after a two-legged final on 'home' and 'away' consoles.

"I only hope I don't wake up now," MoAuba exclaimed in front of the 1,700 fans in attendance at London's O2 Arena. "It's crazy. I can't believe it. I had such hard games. I beat them all. I didn't expect this - it's unbelievable!"

The 22-year-old certainly didn't have it easy and was not considered amongst the favorites at the start of the tournament. In the PlayStation final against FC Basel's Nicolas "nicolas99fc" Villalba, he had his nerves tested as the most exciting tie of the tournament was decided on penalties to set up a clash with the reigning title holder Msdossary.

Werder Bremen teammate Michael 'MegaBit' Bittner had been knocked out by the Saudi Arabian gamer in the Round of 16, but played his part in ensuring MoAuba went one better.

"MegaBit is a great Xbox player and he knows how Dossary plays," explained MoAuba. "He gave me some little tips: don't play too fast, you have to keep possession. MegaBit had a great role in this final."

Harkous has been a mainstay of the competitive FIFA circuit and, in 2019, represented Germany in the FIFA eNations Cup and won the Virtual Bundesliga title with Werder. The title in London will take pride and place in a trophy cabinet that also already holds five German titles.

"I came to the World Cup without any practice," admitted MoAuba. "I thought I'd get the quarter finals, maybe the semifinals. I had such a hard bracket. Not just Dossary, I had Nicolas, Pina and Maestro – the top four of the world. So I had to beat them all. The final was crazy!"