Turkish President Erdogan has said his country will allow migrants to leave Turkey for Europe if the EU continues to push Ankara. Berlin has said sticking to an EU-Turkey migrant deal is in all parties' interest. 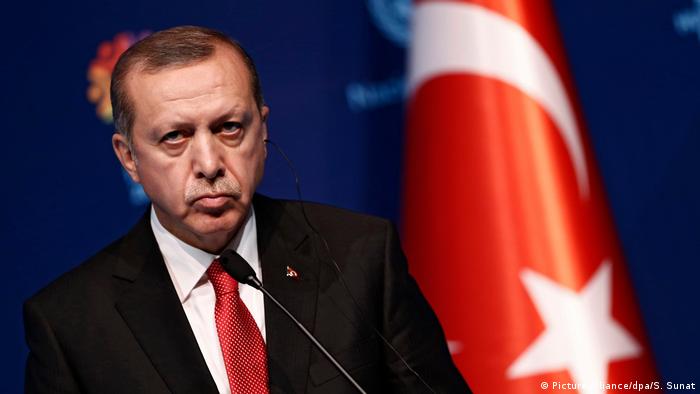 One day after the European Parliament voted in favor of freezing EU membership talks with Turkey, Turkish President Recep Tayyip Erdogan said on Friday that Turkey could open its borders and allow migrants to leave for Europe if pushed by the European Union.

"If you go any further, these border gates will be opened," he said in Istanbul. "Neither me nor my people will be affected by these dry threats. It wouldn't matter if all of you approved the [European Parliament] vote."

Last March, the European Union and Turkey reached a migration agreement that saw Brussels promising to provide billions of euros in aid and visa-free travel for Turks visiting the bloc in exchange for Ankara providing shelter to hundreds of thousands of refugees, mainly from the Middle East and Africa, looking to reach Europe.

"We are the ones who feed 3-3.5 million refugees in this country," Erdogan said in his speech Friday. "You have betrayed your promises."

A spokeswoman for the German Foreign Ministry said sticking to the migrant agreement was in both Turkish and EU interests, adding that "threats are not helpful."

Croatia's Foreign Ministry also said on Friday that it was not in the EU's interest to cancel accession talks with Turkey.

However, officials in Europe have increasingly criticized Erdogan for his administration's far-reaching crackdown on Turks following a failed coup attempt in July.

More than 125,000 people - including soldiers, academics, judges, journalists and pro-Kurdish leaders - have been detained or dismissed in what opponents, rights groups and some Western allies say is an attempt by Erdogan's administration to crush all dissent.

In its non-binding resolution Thursday, the European Parliament in Strasbourg voted 479 to 37 to urge the European Commission and national governments within the EU to freeze complicated negotiations over Turkey's bid to eventually accede to the 28-nation bloc.

The talks have been going on for 11 years, often without advancing much.

In an initial reaction on Thursday, Turkish Prime Minister Binali Yildirim dismissed the EU parliament's resolution, describing it as "insignificant from our aspect."

The EU executive's chief diplomat, Federica Mogherini, cautioned the parliament in Strasbourg that an end to the accession process would result in a "lose-lose" situation.

"I think the best way to strengthen Turkish democracy ... is by engaging with Turkey, keeping channels open," she said.

EU leaders are due to discuss Turkey again when they meet in Brussels at a regular summit in mid-December.

On Thursday, the Turkish central bank hiked its main interest rate as it battles to prop up the embattled Turkish lira.