Huge crowds took to the streets of Istanbul to celebrate 563 years since the Ottoman siege that conquered the city. In a speech, President Erdogan used the occasion to condemn the US, Russia and Iran. 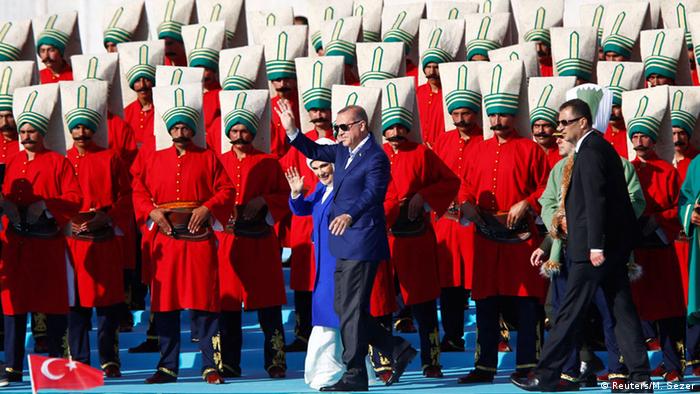 Tens of thousands responded to President Recep Tayyip Erdogan's latest attempt to stir up national pride on Sunday by participating in a massive rally to mark the conquest of Constantinople by the Ottoman Turks. Fireworks, huge parties and a public speech by the president were all part of the 563rd anniversary celebrations.

With an impressive security presence - of 9,000 police, a submarine, a frigate, helicopters, snipers on rooftops and sniffer dogs - the authorities wanted to be sure the attacks in recent months from "Islamic State" terrorists or Kurdish rebel groups was not repeated at the rally.

For Erdogan's part, he used the occasion to slam foreign powers for their presence in Syria.

"What business have Russia and Iran (in Syria)? What business do the US soldiers, dressed up with the so-called patches of a terror organization, have there?" he asked the crowd, referencing photos that surfaced earlier this week wherein some American troops have donned the insignia of a moderate Syrian militia. The group has ties to Turkey's outlawed Kurdistan Workers' party (PKK).

US officials have responded by saying the soldiers were not authorized to wear the patches, and had done so without permission.

Critics: Erdogan is a neo-Ottoman

To further commemorate the anniversary, city officials unveiled a new 3D map of the city as it looked in 1453, the year in which Sultan Mehmed II captured the Byzantine city of Constantinople after an eight-week siege and declared it the new capital of the Ottoman Empire.

Under Mehmed, the city became known as Istanbul and became known as a center of Islamic culture. It had been the Ottoman capital until that empire fell at the end of the First World War.

Erdogan has been accused by some critics of employing "neo-Ottoman" tactics in his quest to consolidate authoritarian power in what once was a largely ceremonial presidential office in Turkey. Intimidating the press, bullying critics out of office and jailing dissidents are just some of the abuses of which the international community has accused him.

Questions raised on a new presidential system for Turkey

President Recep Tayyip Erdogan is hoping to transition to a presidential system. The EU is following the changes closely but prefers to stick to realpolitik, Professor Ayse Ayata told DW's Seda Serdar. (23.05.2016)