President Teodoro Obiang Nguema has been the country's president for 37 years. The party of Africa's longest serving leader was widely expected to win the vote. Polling stations in Equatorial Guinea closed Sunday in an election that is expected to keep the party of longtime President Teodoro Obiang Nguema in power.

Most stations closed by 5 p.m. local time (1600 UTC), an hour before the official end of polling. Around 300,000 people were eligible to vote for 100 members of parliament and 75 senators and mayorships in the cities of Malabo and Bata.

Opposition figures said the vote in the oil-rich country in West Africa had been marred by fraud and irregularities, but state media refuted those claims. 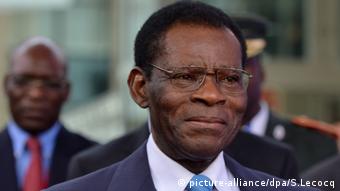 President Nguema has led the country since 1979

The government had blocked the internet for the vote and deployed security forces around the country. Access to opposition websites had been blocked since 2013 and access to the social media website Facebook was stopped when the electoral campaign started on October 27.

The government had also banned private vehicles for the day, which made it difficult for some people living in isolated areas to reach polling stations.

Opposition parties have nevertheless aimed to win seats and shift the balance of power away from the PDGE, which has controlled the country's politics since the end of single-party rule in 1991.

The former Spanish colony is home to 1.2 million people and borders Cameroon to the north and Gabun to the south and east.