The ground is parched, the harvest ruined. Severe drought are bringing hardship to tens of millions of Africans. Aid agencies fear for the worst. 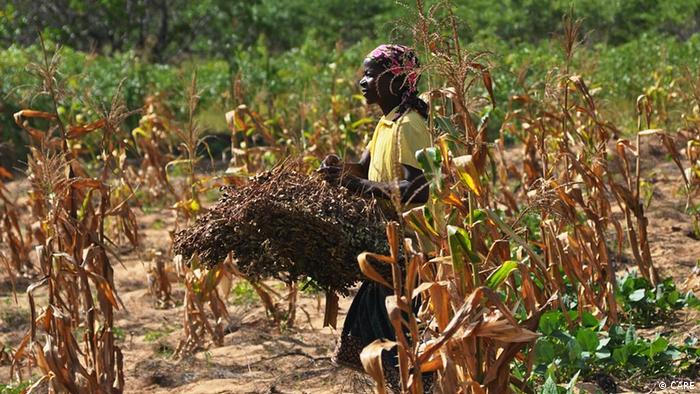 The drought on the Horn of Africa and in southern Africa - in Zimbabwe, Malawi, South Africa, Mozambique and Ethiopia - has now reached devastating proportions.

"Many people no longer have any stocks of food left and are trying to sell their chickens, goats and cows in order to provide for their families," said Marc Nosbach, country director for the aid organization CARE in Mozambique.

But once they have sold their livestock, they have nothing to fall back on. Mozambique is experiencing its worst drought since the 1980s and around 35 percent of families face chronic food insecurity, according to CARE.

There have been abrupt changes in the weather. Rainfall in southern Africa from October to December 2015 was at lowest level for those three months in 30 years. The World Food Program (WFP), which released those figures, blames El Nino, the weather pattern which recurs every two to seven years.

El Nino's impact varies with location. In some regions, the changes in warm water currents associated with it cause an increase in rainfall and flooding, as in parts of Kenya and southern Ethiopia. In other regions, the opposite happens and rainfall ceases.

But why was the 2015 - 2016 El Nino so intense? Even the experts are at a loss for an answer. There are indications that climate change could amplify the effects of El Nino, but this is far from certain, said Jacob Schewe, who does research into long-term climate change at the Potsdam Institute of Climate Research, near Berlin.

Schewe told DW that El Nino was a "highly unpredictable weather phenomenon." Its intensity and the timing of its appearances were subject to such large fluctuations that it was impossible to detect any sort of trend, even over decades, he said. 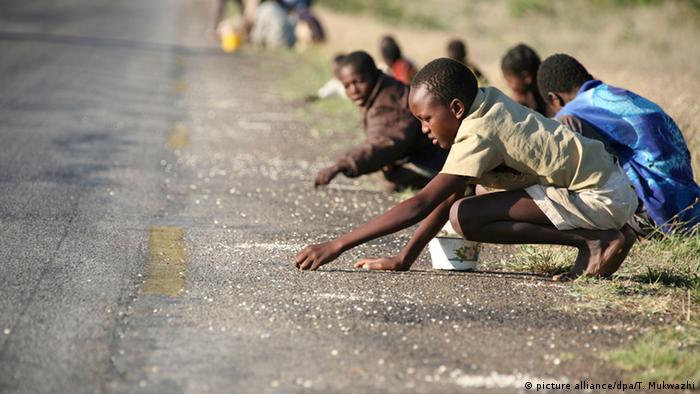 Children picking up corn spilled on the roadside by aid trucks during a previous humanitarian emergency in Masvingo, Zimbabwe

On the Horn of Africa and in southern Africa, it was likely that the extreme droughts would continue. Schewe said extremes in temperature and rainfall were becoming more frequent, partly as a result of man-made climate change.

As the food crisis worsens in Ethiopia, humanitarian agencies are ringing alarm bells that there is not enough funding and that food is running out fast - projecting worse to come. Meanwhile, authorities in this land-locked country find it hard to get what food there is to the needy. (19.02.2016)

Zimbabwean government is seeking some $1,5 billion (1,4 billion euros) from donors to avert hunger which has affected more than a quarter of the population. However, challenges remain before that money comes along. (16.02.2016)

Growing desertification and violence in Nigeria is forcing thousands of Muslim herdsmen to move south, leading to clashes with Christian crop farmers. Residents and activists report that hundreds have been killed. (11.08.2016)

Global warming of up to 6 C in Africa

"We can assume that the impact of El Nino will be made worse by climate change," said Marc Nosbach from CARE. The ruining of the two has already caused severe damage in southern Africa, he said ruining harvests.

Nick Nuttall, press spokesman for UN's Framework Convention on Climate Change (UNFCCC) believes that such emergencies will recur frequently in future. He is well acquainted with climate change forecasts. "On average global temperatures have risen by about 1 C since the start of the Industrial Revolution," he told DW.

But in parts of Africa, temperatures are rising much faster than the global average. "By the end of this century, temperatures in Africa could have jumped by between 3 and 6 C. The effect on harvests and the population would be horrendous," Nutall said.

Schewe said humankind must work towards decoupling itself from the impact of weather fluctuations. One should also continue to try and limit climate change and provide help for those regions that are worst affected.

These funds were to be channeled into renewables and other projects which would help to counter climate change. But if the challenge is to be surmounted, then it is important that developing countries really receive this aid.

Outwitting the drought in Niger

Outwitting the drought in Niger