The art of cult performer Marina Abramović, one the world's most important contemporary artists, can be now experienced in Stockholm. DW's Julia Hitz engaged with her latest work, "The Cleaner" - for a whole eight hours.

The creature that takes me gently by the hand as I enter a round domed room is dressed in black, has pale blue eyes, bleached hair and a nose piercing. I can't tell if it's a man or a woman. A gentle smile comes more from the eyes than from the mouth. The person's hand is cold, but friendly, and I trustingly follow. We walk through a corridor that runs around the room. I leave my bag at the entrance - including my vital smartphone.

The sound landscape in which I'm emerged feels sacred. However, the web of voices is not churchly; harmonies search each other steadily, falling into one another, questioning and answering each other, without any trace of worship or incense.

We pass by a group of giant statues and turn into the inner circle. A huge dome arches above us. Different spaces are created by light tape markings on the dark brown wooden floor: small groups of rectangles, a triangle, a few crosses. My companion leads me gently into a large rectangle in the middle of the room where four people are already standing and lets go of my hand. 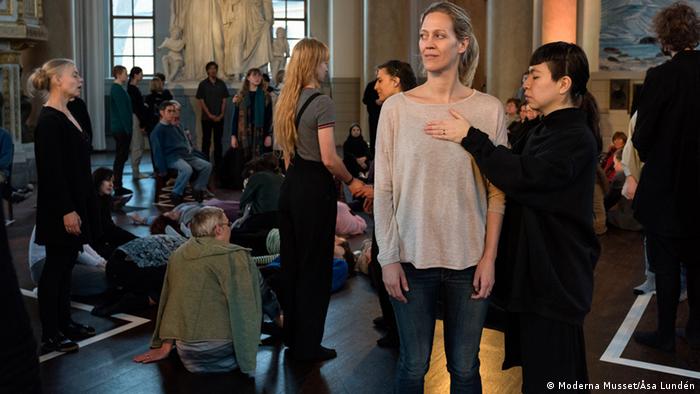 Guided, in order to let go: Marina Abramović's "The Cleaner" performed in Stockholm

Marina Abramović's new performance, "The Cleaner," is on show for seven days in Stockholm, every day for eight hours, in the Eric Ericson Hall, near the Moderna Museet.

The artist gave a similar performance in London's Serpentine Gallery in 2014, called "512 hours." Like in the Eric Ericson Hall, visitors had to leave all their personal belongings at the entrance and were allowed to stay as long as they wanted, becoming part of the performance. In fact, they were the actual performance. However, while visitors in "512 hours" were isolated through headphones, the music in "The Cleaner" connects them.

"512 hours" featured "moments that made me feel that all my work over the years was worth the effort," wrote Marina Abramović in her autobiography, published in 2016. "They provided me proof of the transformative power of performance art."

She has pursued this approach ever since, even if critics claim her work lacks content and cultivates self-references to her own celebrity. 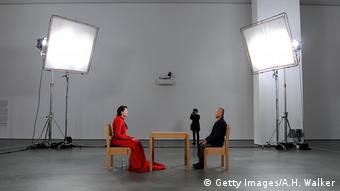 The artist is literally present: Abramović at the MoMA

Famous for saying that the art of the future will be an art without objects, Abramović has deeply embodied this concept in her works. Her exhibition "The Artist is Present" at the New York Museum of Modern Art was undeniably the climax of this development - and of her career. The artist was more than present: Over three months she sat on a chair of the MoMA for seven hours without moving while spectators took turns sitting opposite her. She engaged with each counterpart, without moving or speaking, answering a question that has certainly accompanied her 40-year career as a performance artist - "Is that art?" - with a forceful demonstration.

Three quarters of a million people came. The queues in front of the MoMA grew longer every day, and visitors were willing to wait for hours to sit in front of the artist. Marina Abramović became a celebrity. Spectators were fascinated, while art critics were divided. The highly emotional documentary, "The Artist is Present," further contributed to Marina Abramović's popularity, creating a testimony of the artist's work.

Engaging in a performance

By 2:00 p.m., there's already a lineup in front of the impressive domed building of the Skeppsholmen Church. The former church was turned into the Eric Ericson Hall in 2002.

About 170 people at a time may enter the room. The people waiting are a mixed bunch of young hipsters and old bourgeois, as well as a few children. They're all taken by the hand by a performer dressed in black.

Are they, too, trying to spot Abramović, like I am?

There she is, in a simple black dress like her performers, moving slowly through the room just like them. Her face is strangely timeless, her features a bit mask-like, but her eyes are animated and she has a smile on her lips.

She accompanies individual people, this way or the other. She often simply puts her hands on their shoulders from behind. And then - she disappears. It is interesting to see how her importance diminishes over the eight hours I spend in the room. The Grande Dame of performance fades into the background.

Meanwhile, I start noticing other people more attentively, especially the other performers: I look into the eyes of some of them for several minutes. Some of them hug me, put their hand on me. Something special happens in this moment of being seen, of being taken by the hand. You're plunged into a loving atmosphere while releasing energy. And with this energy you become more attentive to the other people in the room, more connected. Is that art or esotericism? 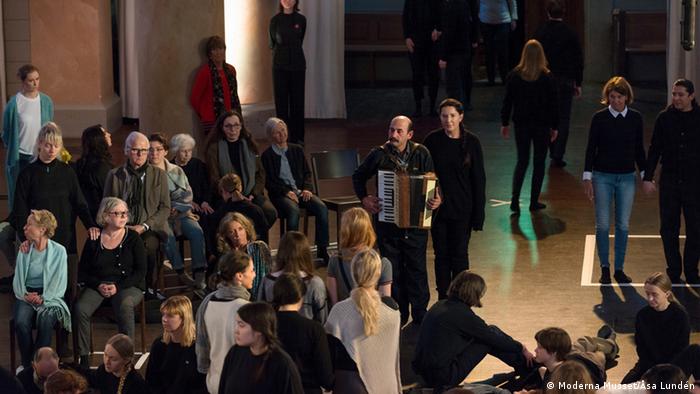 Choirs and soloist create a constant soundtrack; Abramović subtly stands in the background

After a while, I'm choosing my place freely and touching strangers. I lie down, sit, walk or simply stand. Every encounter changes me a little. The singers create a soundscape in which we move around like small particles. In the best moments, I feel as if I'm a part of a vibrating instrument.

In "The Cleaner," choirs and soloists are part of the performance. A group of professional singers connects the different choirs performing one after the other, resulting in a continuous, eight-hour-long musical performance.

"They're really a reflection of Sweden, like a small Stockholm: There are choirs of immigrants, such as the Iraqi Women's Choir or the Bulgarian Choir, as well as traditional Swedish men choirs and church choirs, singing classical songs. Some solo musicians are also part of the performance," explains Catrin Lundqvist from Moderna Museet, who picked the choirs, with Abramović and choreographer Lynsey Peisinger, in a months-long process, just like finding the 29 performers who are accompanying and guiding spectators through "The Cleaner."

Can performance art be preserved?

Along with the new work, an exhibition also called "The Cleaner" revisits the artist's body of work and life. It is the first major retrospective of her work in Europe, which is somewhat surprising, considering that the now 70-year-old artist from former Yugoslavia has been known for her performances since the 1970s, showing at all the art hotspots, including the Documenta and the Biennale.

In this retrospective, Marina Abramović demonstrates that performance art can be revisited. In the 1990s, she began transmitting her techniques to other performers and reproducing performances as well. 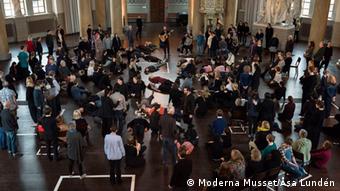 Visitors of the performance go on a personal journey

She started doing so with "Seven Easy Pieces," which she performed at the Guggenheim Museum in New York in 2005. For seven consecutive evenings, she gave seven very provocative performances - her own as well as some by other artists. It was an homage to performance artists of the 1970s and her first attempt to perpetuate performance artworks through re-performance.

In the MoMA retrospective, Abramović let other performers revisit her works. Now, "Art must be beautiful, Artist must be beautiful," "Cleaning the Mirror" and "The Freeing Series" are performed at the Stockholm retrospective. "It's obviously something unusual for a museum: living artworks. It was a true challenge," says Catrin Lundqvist. She is satisfied with the result: "I find the reperformances of Marina's works function very well."

Along with re-performances, Abramović has been working on group performances such as "The Cleaner." They are emotional, energizing. Eight hours without water or going to the restroom? No problem. After those eight hours, I felt as if I had showered in energy. I believe the other 650 visitors felt the same way, too. Did art emerge from the performance? That debate is still open. But I could definitely notice a transformation.

"The Cleaner" is performed daily at the Eric Ericson Hall in Stockholm through March 5, 2017. Admission is free. Re-performances of Abramović's works are held through May 21, 2017. The retrospective will travel to Denmark and then to the Bundeskunsthalle Bonn in Germany next year, from April 20 - August 12, 2018.

She combed her hair until her head bled, lay down on ice blocks and ran into cement pillars. Marina Abramovic's art is about the moment, but the images they produce have endured for decades. (30.11.2016)

Facing allegations of rape, dissident artist Pyotr Pavlensky has fled his native Russia and is seeking political asylum in France. Pavlensky's previous performances have led to run-ins with the law. (16.01.2017)

With their bald heads and outrageous outfits, Berlin-based duo Eva & Adele are a rather striking couple on the art scene. Now they’ve been honored with an exhibition in Paris. (19.12.2016)