Egypt′s Coptic Christians live in fear | World | Breaking news and perspectives from around the globe | DW | 21.08.2013

Islamist attacks on Christian churches and facilities in Egypt are on the rise following the ouster of President Mohammed Morsi. They are not protected by the police or the justice system. 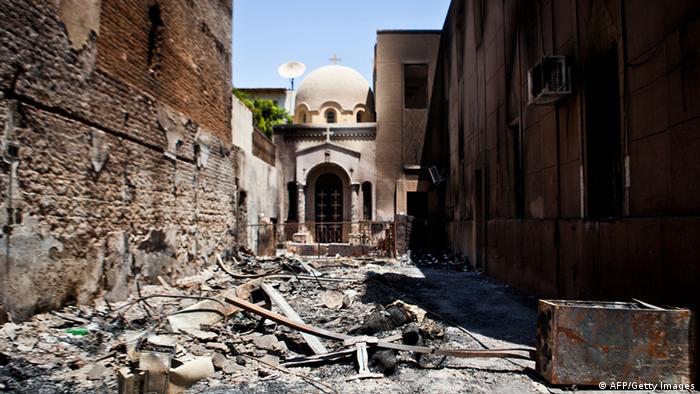 Life has never been easy for Coptic Christians in Egypt. But what has been going on in the country since the ouster of former President Mohammed Morsi has reached a new low. According to Ishak Ibrahim of the Egyptian Initiative for Personal Rights (EIPR), there have been at least 44 attacks on Christian churches since the massacre of hundreds of Islamist protesters on August 14 - and that is counting only attacks that totally or almost completely destroyed the churches, not attacks with minor damage or attacks on houses and businesses.

The situation has worsened dramatically since Morsi's ouster on July 3. Ibrahim, a scientist at EIPR's research program for the freedom of religion, witnessed leading members of the Muslim Brotherhood agitate against Copts. "They give their supporters the impression that the Copts worked hand-in-hand with the military to overthrow Muslim Brother Morsi in order to end Islamic rule." 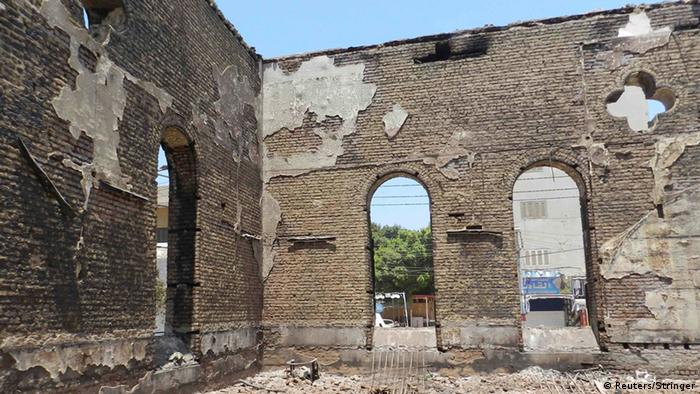 Scores of churches have been burned down

While in public, the Muslim brothers stress that they have nothing against Christians, their Arabic websites prove the opposite. On its regional Facebook page, the Muslim Brotherhood's Freedom and Justice Party in Helwan accuses the Coptic Pope of supporting groups that attack mosques and create chaos on the streets. The Coptic Church, they say, is waging a war against Islam and Muslims.

At the same time, the Muslim Brotherhood dismisses such websites as forgeries aimed at denouncing the group and also disclaims responsibility for the current wave of attacks on Christian facilities.

Previous rhetoric, however, leads one to assume that Islamists are behind the attacks. One such attack occurred in the village of Bani Ahmed in Sharkia province in early August, triggered by a quarrel between a Christian jubilant at Morsi's ouster and a Muslim supporter of the former president. In the wake of the argument, hundreds of Muslims from neighboring villages attacked the homes of Christians, as well as a church. "The Christians tried to protect their houses, but in the end, more than 43 houses were burned down and robbed," Ibrahim said.

It took the police hours to arrive at the scene of the unrest. The further course of action has become problematic: often, informal conciliatory meetings are called in the wake of violence. Christian and Muslim representatives from the town get together and find solution to the problem without involving the courts. As a rule, state authorities favor such deals. Critics, however, say the agreements negate the legal system and allow perpetrators to avoid criminal proceedings, and that without a penalty, there is no deterrent effect. 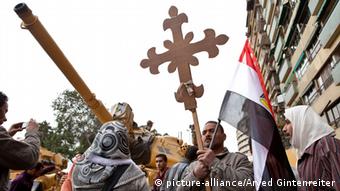 Copts are the dominant Christian group in Egypt

In Bani Ahmed, the Christians affected marched to the next police station to file charges. In response, representatives of the Muslim Brotherhood promised to solve the problem, Ibrahim said. A seven-member committee of judges was formed - all of them Muslim, and five of them members of the Brotherhood.

Ibrahim described the outcome of the conciliatory meeting: "The Christians had to withdraw their charges, and the victims received no financial compensation. Should there be another fight, neither of the parties will attack the other's place of worship."

The Bani Ahmed conciliation conference shows that extremist Islamist attacks are not the only problem. The state's security apparatus and justice system have failed completely, as numerous human rights organizations do not tire to point out. Often, Coptic Christians can not assert their rights and depend instead on the authorities' arbitrariness.

The failure on the part of the state institutions is not new, it also existed under presidents Hosni Mubarak and Morsi. But the rapid rise in the number of attacks gives the problem an entirely different magnitude. Attacks on Christian churches and facilities occur almost daily, and a decline is not in sight.

The EU's balancing act in Egypt

The European Union is scrambling to help mediate the conflict in Egypt. The bloc's foreign ministers are set to discuss whether to freeze aid to Cairo, but Brussels is struggling to find a common approach. (20.08.2013)

Egypt's government portrays the unrest in the country as a fight against Islamist extremists. Experts warn though that a ban of the Muslim Brotherhood would only radicalize the conflict. (19.08.2013)

Feeling let down by the West

There is one thing that the Muslim Brotherhood and the government in Egypt have in common: resentment toward the West. But that strong reaction also shows that the West is a sought-after ally in Egypt. (20.08.2013)