Egyptian Prime Minister Hisham Qandil has reportedly crossed into the Gaza Strip amid an Israeli military campaign. Israel's army says it has begun calling up 16,000 reservists as the conflict entered its third day. 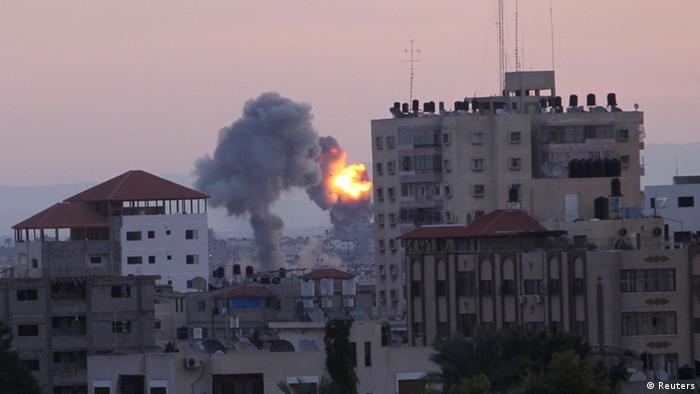 Israel's army announced that it would halt attacks during Qandil's visit on the condition that no rockets were fired into Israel. Some rocket fire from Gaza has, however, been reported. Egyptian state television and security sources quoted by the news agency AFP said Qandil had entered via the Rafah crossing and had traveled to Gaza City.

Officials in Gaza said Qandil would meet with members of Hamas, the movement that rules Gaza. Egyptian President Mohamed Morsi had warned on Thursday that his country would not accept what he called Israel's "aggression" in the Gaza Strip.

The conflict has killed 18 Palestinians, several of them children, and wounded 235 in just under 36 hours. Three Israelis have been killed.

'Talk of a truce'

Fears are mounting that the crisis in the Middle East will escalate. The Israeli election campaign, the struggle between the Palestinian Hamas and Fatah parties, and Egypt's role are all grounds for uncertainty. (16.11.2012)

The Israeli army announced that it had carried out 466 air strikes since it launched the operation Wednesday with the targeted killing of top Hamas military commander Ahmed Jaabari.

At a press conference Thursday, Hamas spokesman Sami Abu Zuhri said his organization considered "talk of a truce at this time an attempt to provide more cover for the continuation of the escalation."

Israel announced that 11 Palestinian rockets had been fired overnight. A total of 280 rockets have been fired at Israel from Gaza since Wednesday afternoon, killing three Israelis on Thursday and injuring 19 others. Israel's Iron Dome anti-missile system intercepted another 131 of those fired, a spokesperson said.

As Israel's leadership vowed to do whatever necessary to subdue the area, military sources warned that "an excessive amount of weapons storage facilities" had been "deliberately located inside civilian residential buildings."

Tanks, infantry and artillery units headed toward the border with the strip, Israeli Radio reported. An Israeli military spokeswoman declined to confirm those reports, saying she could not discuss troop movements.