Ed Sheeran and other pop stars sing for Ukraine

Sheeran was joined by Camila Cabello, Tom Odell and Ukraine's Eurovision winner Jamala at a benefit concert in England, raising nearly $15 million to help victims of the war. 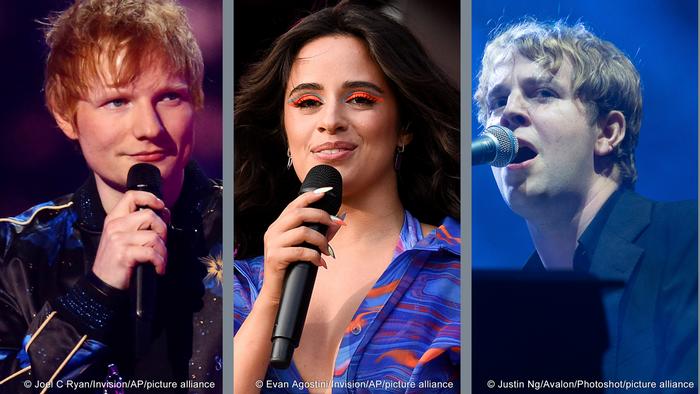 Ed Sheeran, Camila Cabello, Tom Odell: A number of big name pop stars will perform at the benefit on March 29

Since Russia invaded Ukraine at the end of February, artists around the world have been showing solidarity with those suffering from the effects of the war.

A star-studded group of musicians came together to give a benefit concert in Birmingham, England on March 29.

By the end of the two-hour fundraiser, titled "Concert for Ukraine," hosts said the event had raised £11.3 million (€13 million/ $14.8 million), which would go to the organization Disasters Emergency Committee (DEC) for its humanitarian aid in war-torn Ukraine.

Some of the world's most famous pop stars took to the stage for the cause: Ed Sheeran, Camila Cabello, Tom Odell, Emelie Sandé, Becky Hill, Gregory Porter, Snow Patrol and others  performed at Resorts World Arena on Tuesday.

Sheeran took to the stage solo for a two-song set of his hits "Perfect" and "Bad Habits," and also showcased for the first time the song he recorded in collaboration with Cuban-born American singer Camila Cabello, "Bam Bam."

"We're all praying tonight for the peace and the safety of the people in the Ukraine. Thank you guys so much for being part of this important fundraiser," Cabello said.

The winner of the 2016 Eurovision Song Contest, Ukrainian singer Jamala, also took to the stage to perform her song "1944," about the forced deportation in Crimea during Joseph Stalin's rule.

Having fled her home two weeks ago, the singer said ahead of the performance that her close friends and family remain in a bomb shelter in the Ukrainian capital of Kyiv.

Dressed in red and waving a Ukrainian flag, she gave an emotional performance, with the lyrics of her song reflecting the current tragedy: "When strangers are coming / They come to your house / They kill you all ... Humanity cries."

ESC winner Jamala tells of her escape from Ukraine

Tom Odell was also among the performers, playing his song "Another Love," which has become a symbol of Ukraine's resilience on social media. In early March, the British pop singer had performed his 2013 hit at the train station in Bucharest, Romania, to welcome arriving Ukrainian refugees.

"Thousands of Ukrainians fleeing the war are transiting through this station every day and many have been travelling for three days without rest, uprooted from their homes, their belongings, their jobs and their families," the singer wrote on Instagram. "Their world has been turned upside down in an unimaginable way." He drew attention to the many volunteers and called for donations to charities.

Even musicians who will not be playing at the benefit concert are raising funds in their own way for the victims of the war in Ukraine.

The Cure, for example, printed a new band shirt in the Ukrainian national colors. All the proceeds from its sale will be donated to the United Nations Refugee Agency, UNHCR, which is currently also providing aid to refugees from Ukraine.

The band Queen posted on YouTube the two-hour concert they gave in 2008 in the eastern Ukrainian city of Kharkiv with guest singer Paul Rodgers — with the request to donate to UNHCR.

Ukrainian band Antytila was not invited to avoid military associations

The Ukrainian band Antytila, however, did not perform in Birmingham. After learning about the concert, they sent a video message to Ed Sheeran last week, asking to be allowed to perform at the concert via live stream. The members of the band are currently fighting in the Ukrainian capital, Kyiv. 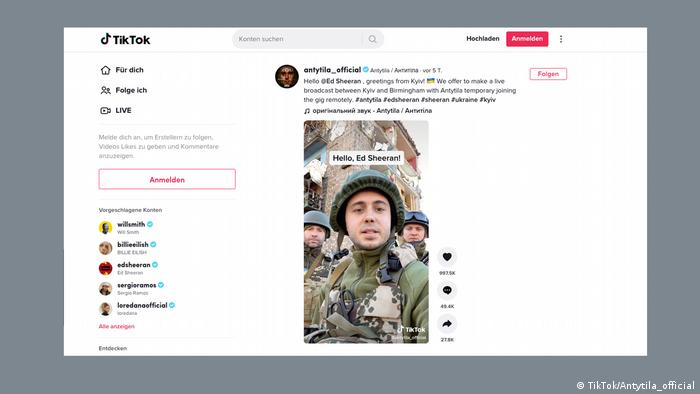 Ukrainian band Antytila's appeal to Ed Sheeran, asking if they could play in the benefit concert, went viral

British singer Ed Sheeran thanked them for the video published on social media. "Firstly, I just wanted to say to all Ukrainians that I love you, I stand with you and that I'm so proud to be playing at this benefit next week," he said. And addressing Antytila: "I can't wait to check out your music, guys — and I'm sending you lots of love."

But the organizers of the concert apparently then contacted the musicians and told them that they would not be able to perform at the benefit show.

"On a personal level, we do of course completely understand why they are bravely fighting for their country, but for this specific concert, it would not be possible for us to feature them, as we are only able to focus on the humanitarian situation, not the politics or the military conflict," the organizers said in a statement.

The band's singer, Taras Topolya said in a TikTok video that they accept the stance taken by the concert's organizers but that they were disappointed: "First of all we are musicians, helmets and body armor are temporary, but we understand the answer and we accept it. The main thing is the people of the United Kingdom must stand with Ukraine."

This article was originally written in German and was updated after the concert.