An oil spill in the Galapagos Islands has been brought under control after Ecuador activated emergency protocol to reduce the environmental impact, authorities announced late Sunday evening.

A ship carrying 2,500 liters (600 gallons) of oil sank near the historic islands, a UNESCO World Heritage Site, on Sunday. 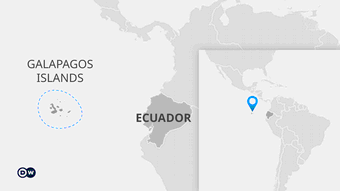 The ecosystem on the islands, famous for helping naturalist Charles Darwin develop the theory of evolution after his visit in 1835, is highly fragile.

"The situation is under control, and a series of actions have been deployed to mitigate the possible effects," the presidential communications office said in a statement.

A crane collapsed onto an oil barge in a port off San Cristobal Island on Sunday, destabilizing the vessel and causing it to sink, local media reported. Crew members jumped from the ship into the ocean to save themselves. One person was injured.

Galapagos minister Norman Wray said personnel were attempting to recover the oil and that the electric generator would be replaced "as soon as possible." Isabela Island, the largest in the Galapagos, currently faces energy rationing.

The same barge, which transports materials to and from the islands, had similarly sunk in a different port in February 2018 after the vessel was destabilized.

The Galapagos Islands are made up of around 130 islands located approximately 1,000 kilometers (620 miles) east of mainland Ecuador in the Pacific Ocean.

Iguanas, giant tortoises, and a wide variety of birds are among the rare animals and plants that inhabit the archipelago.

The tallest mountain on the Galapagos Islands has erupted, spewing ash clouds over the Pacific Ocean. Ecuador's Geophysical Institute said the eruption was ongoing.

Nearly five acres of Ecuador's Cayambe-Coca National Park have been polluted after an oil pipeline burst. The government has vowed legal consequences for the company involved in the disaster.

The oil spill in the Amazon is spreading. On Friday, a landslide in Ecuador damaged a pipeline. Large quantities of oil have leaked out and threaten to poison the water supply of the local population.