Ebola: Half of cases going undetected

Congo's new Ebola response coordinator has said half of the cases in the deadly outbreak remain undetected. Health experts fear the disease, which broke out a year ago, could spread into neighboring Rwanda. 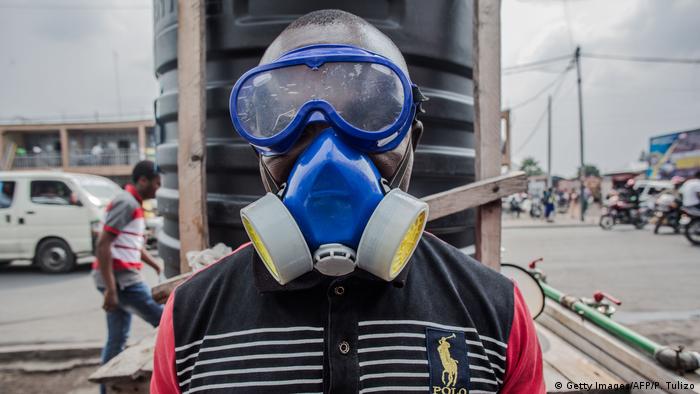 An estimated half of Ebola cases in the Democratic Republic of the Congo are going unidentified, the country's new Ebola response coordinator, Jean-Jacques Muyembe, has told reporters.

"If we continue on that basis, this epidemic could last two or three years," Muyembe said at a Friday news conference in Goma, a city located on Congo's eastern border with Rwanda. He added that the current goal is to bring the detection rate to 80% by strengthening surveillance.

The remarks came a day after Congolese authorities raced to contain the Ebola epidemic after a gold miner with a large family contaminated several people in Goma before dying of the hemorrhagic fever. Muyembe said the man's wife and 1-year-old daughter had tested positive for the disease but were doing well in treatment.

This was the fourth case confirmed in Goma, a city more than 350 kilometers (220 miles) south of where the outbreak was first detected. Health experts fear that an accelerated number of cases in Goma could lead to an outbreak of the disease in neighboring Rwanda.

At least 1,800 people have been killed by the deadly virus since the outbreak began a year ago — the second-worst Ebola outbreak on record. Between 2013 and 2016, Ebola infected around 28,000 people in West Africa, killing an estimated 11,300 in Liberia, Guinea and Sierra Leone.

Researchers in neighboring Uganda have launched the largest trial of an experimental Ebola vaccine that is expected to be deployed in Congo.

The Janssen Pharmaceuticals vaccine trial involves up to 800 people in Mbarara, a city in western Uganda. It has been supported by Doctors Without Borders and the London School of Hygiene and Tropical Medicine.

More than 180,000 people in Congo have already received an experimental Merck vaccine, but health experts are worried about the available number of doses. Congo's former health minister, who stepped down last month, argued against the deployment of the Janssen vaccine, saying a second vaccine would cause confusion on the ground.

Pontiano Kaleebu, a Ugandan researcher who is leading the trial, said the Janssen vaccine has already been tested in about 6,000 people, most of them Africans.

"We are excited about this [trial] ... because this is one of the promising vaccines," Kaleebu told The Associated Press.

A year after the outbreak of Ebola in eastern Congo, the government and aid organizations have still not succeeded in bringing the disease under control. There are many reasons for this, says Dirke Köpp. (01.08.2019)