Driving along an ordinary dirt road, it's hard to miss the Goma Cultural Centre with its bright blue gate, emblazoned with the Congolese flag. "As you can see, we are proud to be Congolese around here," said Belamy Paluku, a volunteer manager at the youth centre.

Given the tense political climate, activism is a dangerous business in the eastern provinces of the Democratic Republic of Congo (DRC). President Joseph Kabila's second five-year term will expire in December and cannot be extended, according to the country's constitution. The electoral commission recently announced that it plans to push back elections to 2018. 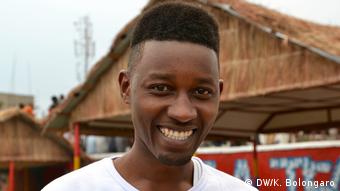 Belamy Paluku is proud to be Congolese

Uncertainties surrounding DRC's political future have led to violent anti-government protests. Some of them have turned deadly. The opposition claims that over 100 people died during demonstrations in September.

Young Congolese have been at the forefront of the protests. But instead of turning to violence, some young people are opting for volunteer work and pushing for change while helping their war-torn region to develop.

At the Goma Cultural Centre, artists volunteer to mentor young performers in developing their performance skills. Paluku and JC Wenga, another manager at the organization, both see art as a solution to decades of conflict in the region. "I really believe that change starts with me. So this initiative had to come from us," 27-year-old Wenga told DW.

Sanaa Weekend – sanaa being the Swahili word for art – started in 2012. It is an opportunity for the young artists to give something back to their community. Every Saturday, 4,000 people crowd onto the grounds to watch free live performances which are organized entirely by volunteers.

Young people can also sign up for dance, music, and theatre classes at the youth centers for an annual donation of $5 (4.70 Euro). The goal is to help young Congolese express themselves through art. "These young people have passed difficult, tragic moments during the war. We want to help them," said Wenga.

For Paluku, helping young people chase their dreams is one way to become an active citizen."Personally, I think volunteering is an important part of belonging to a community, which I think means being present and sharing the same realities as my neighbors," he said.

Neither of the young men considers himself to be a leader. Both see the Goma Cultural Center as a team effort, where volunteers and artists work together in order to succeed. "Unity is our strength. We have built this project as a team and we will go forward together," said Wenga. 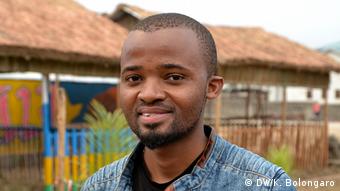 JC Wenga believes that "change starts with me."

Patriotism also motivated the pair to bring change to their region. They were tired of hearing about Congolese being victims of circumstance, Paluku wanted to take control of his life. "Because of the history of colonization and independence in DRC, we feel a sort of dependence on outsiders," he said. "But I think it's very important people realize the role they play in building their country."

A stone's throw from the Rwandan border, volunteer Christiane Binja explains the murals decorating the wall of the Yolé Africa youth center. "This portrait represents a strong African woman," said the 29-year-old, smiling. "I hope this is how others see me."

As young activists begin to pour onto the premises, Binja welcomes participants to the second annual Goma Web Activism Summit. Bloggers, journalists, and advocates from across eastern DRC are attending the event to learn how to harness technology to increase the impact of their activism. "Technology is a way to show what we're living [in North Kivu]," said Binja, who organized the event.

Gender equality is one of the causes Binja is most passionate about. Traditionally, women who venture outside the home have fewer opportunities than men. Since the Second Congo War (1998-2003), the DRC has been dubbed 'the worst place on earth to be a woman' by the international press. 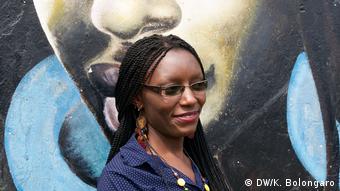 An avid supporter of female artists, Binja visited schools last year to raise awareness about women's contribution to art in the region. The workshop included videos profiling Congolese women working in creative fields."Volunteer work – especially in the arts – has helped me rediscover normal life after surviving this brutal war," she explained.

After her first charity project, Binja became dedicated to volunteering. After joining the Congolese Youth Parliament at 13, she collected food and clothing donations for orphaned children living on the streets at the height of the conflict. "I really enjoyed helping others, so this encouraged me to continue donating my time as I got older," she said. 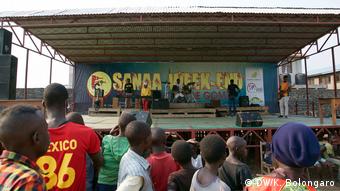 Spectators attend a weekly concert at the youth center

When she isn't busy hosting tech summits or advocating for gender equality, the trained lawyer pushes for officials to support young Congolese to become active citizens. "Young people will replace the older generation in every field in this country, so they should give us more space to start our own initiatives," she said.

With people under 25 making up more than 60 percent of DRC's population, the future of the country likely depends on how willing young Congolese are to become active citizens.

This report was supported by the International Women's Media Foundation.

For most people in the Democratic Republic of Congo, life continues to be a struggle ten years after the country's first free elections. (25.11.2016)

DRC's Kabila shores up power base, turning up heat on international broadcasters

DRC President Joseph Kabila was set to address parliament one day after the prime minister and the cabinet stepped down in a deal over delaying elections. There are to be new restrictions on foreign broadcasters. (15.11.2016)

A major task of DR Congo's new Prime Minister Samy Badibanga is to hold the next presidential elections. Can he succeed amid a deep division within the opposition and help pull the country from the doldrums? (19.11.2016)