The UN's health agency says the Ebola outbreak in West Africa has killed at least 8,000 people. Sierra Leone had the biggest increase in fatalities since last week. 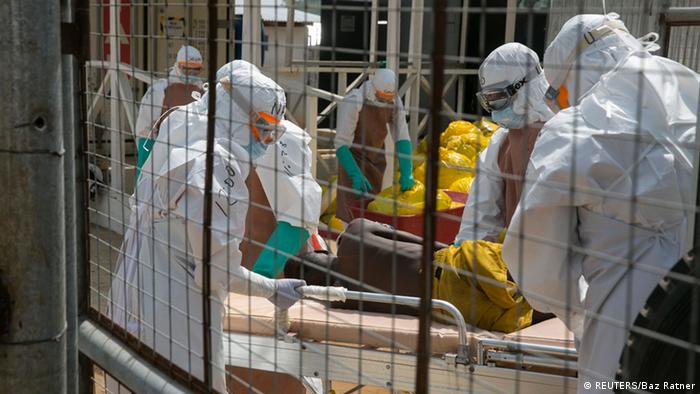 More than 8,000 people have died in West Africa in the Ebola outbreak there, the World Health Organization (WHO) said on Monday.

The WHO said that the 8,153 deaths were among 20,656 known cases of the hemorrhagic fever in the three countries, representing a mortality rate of 39 percent. It said 2,915 deaths had been reported from Sierra Leone, 3,471 from Liberia and 1,767 from Guinea.

Sierra Leone had the largest rise in fatalities since the previous figures were issued on January 2, recording 88 deaths.

Doctors in the German capital, Berlin, meanwhile said on Monday that a suspected Ebola infection in a patient from South Korea remains unconfirmed.

The person, whose sex and age have not been named, was injured by a hypodermic needle while treating an Ebola patient in Sierra Leone and brought to Berlin for treatment on Saturday.

Three people infected with Ebola have so far been flown to Germany for treatment. Two recovered, but a UN employee from Africa died in hospital in the eastern city of Leipzig.

Elsewhere in Europe, a Scottish nurse, Pauline Cafferkey, who a week ago became the first person to be diagnosed with the disease in Britain, is reported to be in a stable but critical condition.

"As has been reported, Pauline's condition has deteriorated to a critical state although she stabilized yesterday and continues to receive the best possible care," Health Minister Jeremy Hunt told British parliamentarians.

Hunt also said Britain had tightened steps for dealing with possible Ebola patients after screening at London's Heathrow failed to detect the disease in the nurse.

She contracted the disease while working at a British-built Ebola treatment center in Sierra Leone.

No more US screening for Malians

The United States, for its part, has decided to drop extra Ebola screening for travelers coming to the country from Mali as of Tuesday.

"Travelers from Mali will no longer be required to undergo enhanced screening and monitoring when entering the United States, nor will they be required to enter the country through the five designated airpots that perform this screening, " the Centers for Disease Control and Prevention said in a statement on Monday.

On Tuesday, Mali will have gone 42 days - or two full incubation cycles - since the last Ebola patient there had contact with anyone who was not wearing protective gear, the statement said.

Scientists at Germany's Robert Koch Institute have said the likely cause of the current Ebola epidemic is from bats that live in hollow trees in Guinea. The virus may have been passed on to a child who was playing there. (30.12.2014)

Since the UN Ebola mission was set up in September, the hope that its work would be over within 60 - 90 days has faded. The goal is now zero cases, however long it takes. The new head of the mission will be an African. (30.12.2014)