The place where Thomas Raufeisen was unfairly imprisoned and interrogated is today his place of work. As a witness who experienced this prison first hand, he guides visitors through East Germany's central remand center. 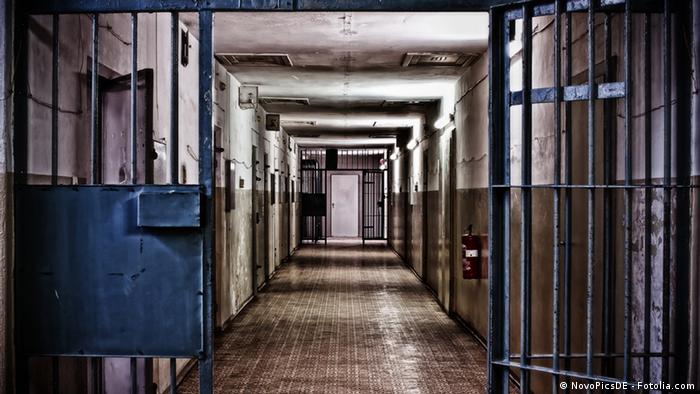 The 52-year-old routinely walks the long corridors of the former Stasi prison in eastern Berlin, past the cells and interrogation rooms where he spent the worst days of his life. Fear and uncertainty nearly did him in, Thomas Raufeisen tells a 10th grade school class from Lower Saxony.

Just a few minutes ago these teenagers where standing in the sunny yard outside chatting away. Now they are very quiet. Attentively, they follow the former inmate into a small room.

"I was also locked up in a small cell like this," Raufeisen tells them. "These windows only told you whether it was light or dark outside. Nothing else." He points to a window made of blocks of faded cloudy glass. A wooden cot is attached to the wall. Next to that, a sink and toilet.

Word for word Raufeisen's calm, deep voice paints pictures of the conditions of his incarceration: the sleepless nights, the ill-fitting blue tracksuits he was forced to wear and of the demoralizing psychological terror his interrogators employed.

Over months in these interrogations, Raufeisen was asked the same question over and again: why did he think he was there. But the then 19-year-old, then roughly the same age as the students now touring the prison, had no idea what the former East German authorities were accusing him of. He only gained an insight into this after more than a year in prison, when his sentence was pronounced. The incriminating statements against him, he had signed at some point when he was utterly exhausted. 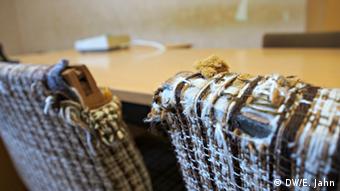 Prisoners would sit on these chairs, fearfully waiting to be interrogated

"Do you know that in Germany there is a presumption of innocence? Do you know what that means?" he asks the group. The kids shake their heads. That anyone accused is presumed innocent until a court of law either proves their guilt or confirms their innocence, he explains.

"Here, I was assumed guilty from the very start," he said. "The interrogations served merely to determine the extent of my guilt." Formalities served to give the outside world the semblance of fair process. Thus, Raufeisen was allowed to speak with a lawyer, but was not permitted to discuss anything pertaining to his case.

The teenagers in the room are clearly having great difficulty imagining this. That someone could be arbitrarily arrested, without knowing the reason why. It sounds like something from a bad movie or even a good one, such as "The Lives of Others," which depicted this remand center and went on to win an Oscar in 2007. But to the student here it doesn't sound like something that could have been happening in East Germany just 25 years ago. And yet it did.

Overall it is estimated that some 250,000 people in the former East Germany were arrested for political reasons and incarcerated in several prisons in the country after sentencing. This affected artists, politicians and civil rights activists as well as people not toeing the party line or looking to leave the country. The remand center in Hohenschönhausen for them was simply way-station. But it was the placed where their sentences were decided. Today the memorial is also a central research facility, which aims to analyze and confront political persecution under the Communist dictatorship. 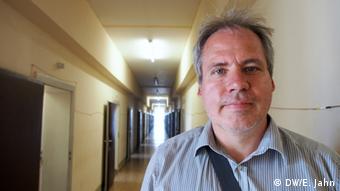 Unlike many other government and military institutions in East Germany, Hohenschönhausen prison was not stormed by demonstrators after the fall of the Berlin Wall, allowing prison authorities to destroy evidence of the prison's functions and history. Because of this, today's knowledge of the functioning of the prison comes mainly from eye-witness accounts and documents sourced from other East German institutions.

"Do you want to know why I was locked up here?" Raufeisen asks the school kids - but only after having guided them through the compound for over an hour. They eagerly nod. No one dared to ask until now. "I was arrested, because I wanted to go home. Funny don't you think? But that was my crime." The youngsters look confused. He takes a deep breath.

Thomas Raufeisen was actually from Hanover, where he went to school and had completed 10th grade at his high school. That was in 1979, when his father suddenly moved the entire family to East Germany. He claimed Thomas' grandfather, who lived on the Baltic, was unwell. A pretext as it later turned out.

Once over the border and in front of two Stasi state security officers, his father confessed to the family that he had been, what he called an "explorer of peace," in other words working for many years as an East German spy, who had at that point been in danger of being discovered. "My father told us to accept that we'd never again see Hanover."

A few days later teenage Thomas Raufeisen was made an East German citizen.

Betrayed by his father 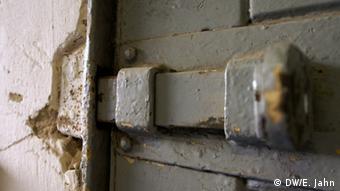 For years, Raufeisen was hoping in vein for West Germany to redeem him

His father back then still believed that the former East Germany had a fairer and better society than the west. Very soon however life for the family became unbearable. Numerous efforts to gain permission to leave the country failed. In September 1981, as the family prepared to escape over the border, they were arrested, taken to Hohenschönhausen and after months of incarceration were sentenced. Thomas Raufeisen was sent to "Bautzen II" prison for three years, his mother was handed a seven-year sentence and his father a life sentence.

How did you mange that, a 16-year-old suddenly asks. Raufeisen answers calmly: "It was hard and often all I could do was withdraw into myself. For a long time my faith in other people was severely undermined." He only slowly regained trust after his release in 1984. Thomas Raufeisen was allowed to return to Hanover, where he managed to pass his high school leaving exam as well as regain some of his lost youth. 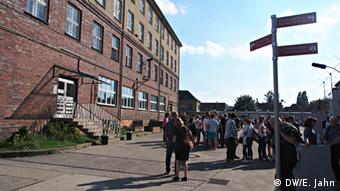 About half of the visitors are school classes

There was never any reconciliation with his father. He died under dubious circumstances in a prison hospital in 1987, only two years before the fall of Communist East Germany. Thomas Raufeisen found some answers in his Stasi secret police file, which was made accessible after the fall of the Berlin Wall. He also went to Hohenschönhausen, when it becomes public knowledge that people were incarcerated here under the former East German regime. Until the fall of the Berlin Wall this compound for average East Germans was secret and very much off-limits.

"I personally only knew the inside of my prison and I had no idea where I was all that time," he said.

When Raufeisen entered the compound memories came flooding back - at the sound of the doors being opened or slammed, and the smell of the corridors. Many years later he moved to Berlin for work. In 2003, after failing to find employment in his chosen profession, Raufeisen began working as a tour guide at the Hohenschönhausen memorial site.

Is it an ironic twist of fate that the most traumatic experiences of his life today enable him to find employment? "I can make this bad thing good, that's for sure. But this is not supposed to serve as my personal therapy," Raufeisen states clearly. This place now is a different one for him, because he is a free man.

At the end of the tour he does, however, want to be sure to give that the school kids take something away from this vist:"It is important to me, that those times are not played down. You need to know that this happened so that you can make sure it is never allowed to happen again."

Raufeisen looks into serious and moved faces. The youngsters from this 10th grade appear to have got the message.

From Iron Curtain to Green Belt

Remembering when Germany was split in two