Internet piracy has dealt heavy blows to the music industry over recent years. Now book publishers are complaining that the rapid spread of illegal electronic books threatens the overall commercial viability of e-books. 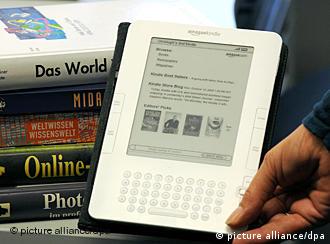 Electronic books are easier to copy and share than real books

Eighty euros is what a Java software guide book normally costs at an online retailer like Amazon; one minute is all it takes to download an electronic copy for free from one of the many illicit websites distributing books that should be protected by copyright.

Much to the dismay of publishing houses around the world, a growing number of consumers are turning to unlawful sources for their reading material. Large illegal e-libraries stock everything from pricey scientific literature to recent bestselling novels, not to mention current newspapers and magazines.

Laws that fix the retail prices of books have made Germany fertile ground for e-book piracy. Regulations intended to protect publishers and small retailers from large chains have left the industry struggling with the question of how to adequately price e-books.

The result is a disappointingly small number of high-priced e-books available in Germany, while electronic sales in countries like the US appear to be quickly catching up with those of conventional books. 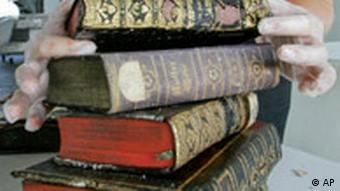 E-books are rapidly replacing hard copies in the US

When supply is limited and prices are high, many consumers are tempted by illegal downloads.

"When publishers are not making the content you need available, illegal downloads are a form of self-help," says Manuel Bonik, the author of a new study on e-book piracy.

This attitude is estimated to cost publishers millions in lost revenue annually. Sales of e-reading devices like the Kindle and the iPad have only recently surged in Germany, so now would be the time for publishers to nip in the bud this trend toward e-book piracy.

Bonik's study shows that commercial e-book stores are losing the race against illegal websites: Google search statistics suggest that people are primarily looking for free e-books, frequently in places they know to be illegal.

That is not altogether surprising. The modern 'download culture' is well established. Recent years have inculcated people with the belief that anything on the Internet is free, and publishers are hard put to convince potential customers otherwise.

In some cases, e-books really are free, most notably at Project Gutenberg - a collection of books whose copyright has expired and can thus be freely distributed online.

For many users of university libraries, scientific e-books are free to use, as universities have made flat-rate deals with some international publishers. Springer and Elsevier are two examples of companies who have found a way around the German debate over fixed retail prices by offering entire collections of e-books to institutions for a single fee.

Most publishers try to defend their territory by removing pirated content from the web, but it seems they are fighting a losing battle.

"The hosts of illegal e-book websites are usually based abroad, in countries such as Togo, where prosecuting the responsible people is almost impossible," says Susanne Barwick, a lawyer with the German Publishers and Booksellers Association.

The culprits are aware that they are safe as long as they hide in the right places, and they laugh in the face of prosecution.

The authors of the new e-book study tracked down the name of the registered owner of one such piracy domain, and found that he seems to have sprung right from the popular children's cartoon series 'Sponge Bob': The domain owner was listed as Patrick Star, resident of Bikini Bottom.

After evaluating the e-book market, study author Manuel Bonik foresees a gloomy future for publishers: "I expect the situation will already go downhill drastically within the next two to three years."

While the music industry managed to delay its downhill spiral over a longer period of time so legal platforms like iTunes could develop, publishers' commercial experiences with audio-books give little reason for optimism.

"Audio-books never once had a chance on the legal market," says Bonik, explaining that millions of German copies are being downloaded and swapped on illegal websites.

Whether e-books suffer the same fate will depend on how fast German publishers move to change pricing policies. If they lose this race, an already hard-put market will likely face a deep crisis.

The bill, which is expected to pass the National Assembly later this month, would let publishers set e-book prices. The idea is to prevent publishers from being undercut by the likes of Amazon or Apple. (16.11.2010)

Publishers, booksellers and industry insiders agree: the e-book is set to turn the entire industry on its head. But for the moment, sales figures for e-books in Germany are not reflecting this trend. (29.07.2010)