Did you know that you have an increased cancer risk at the nail salon? Or that a lack of sleep can make you depressed? DW brings you this week's health news, all in one handy guide right here! 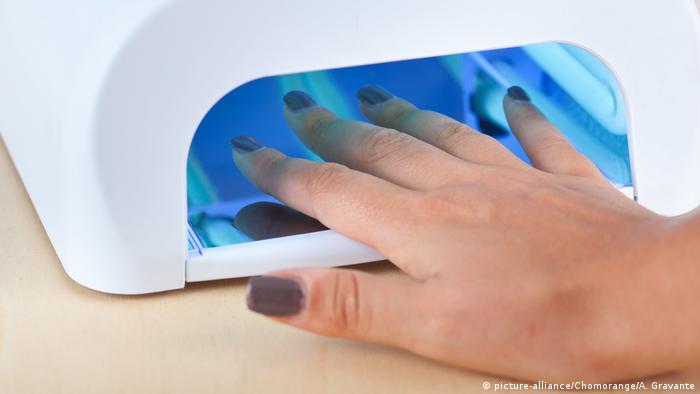 One yogurt a day might keep the doctor away. At least that's what researchers from the University of Wisconsin-Madison are saying. Their research showed that eating 12 ounces (just over 300 grams) of yogurt a day can reduce the amount of inflammation in the body. They believe that yogurt improves the integrity of the intestinal wall in a way that prevents bacterial toxins from entering the rest of the body and causing inflammation. And whether it's aching joints, skin disease, dementia or diabetes – inflammation plays a role in all of them. Yogurt not only reduces inflammation, but also supports digestion and strengthens your bones and teeth.

Are you often too lazy to follow your work-out plan? Instead of forcing yourself to exercise, you could combine your routine with mindfulness training. It's supposed to help boost your motivation. That's the result of a study by researchers at Iowa State University in the US. They studied the effects of a mindfulness-based stress reduction program on physical activity. The program included exercises in breathing, meditation, self-awareness, and stretching and movement. Their results showed that mindfulness and stress-reduction training can boost your motivation to exercise more, including everyday activities such as walking instead of driving or taking the stairs instead of the elevator.

What is box breathing?

Box breathing is a technique often used by people in highly stressful jobs, such as police officers. This breathing technique can calm the nerves and improve concentration. You can do it anywhere. As a first step, close your eyes. Counting slowly to four, inhale through your nose. As you do so, notice the air filling your lungs. Then, hold your breath and slowly count to four. Now, slowly exhale and count to four again. You can repeat this breathing technique several times, until you feel that you have calmed down. Breathing techniques are often used for mindfulness exercises, such as meditation or yoga. They are thought to reduce stress and anxiety, keep our brains healthy and fit, and boost our concentration.

"Don't sunbathe and always wear sunblock," the advice is everywhere. After all, it is widely known that the sun's UV rays can cause skin cancer. However, many people not only expose themselves to excessive UV radiation at the beach and in tanning studios, but also in nail salons. The lamps used to dry and harden the nail polish emit UV light and are thought to increase the risk for white skin cancer on the hands. Although experts are still divided on the topic, organizations such as the American Skin Cancer Foundation and the American Academy of Dermatology recommend people use broad-spectrum sunblock before having a manicure to lower the risk of developing skin cancer.

Smoking can cause periodontitis

If you're a smoker, you've probably heard this a thousand times: "Why don't you quit already?" Smoking has several known health risks, including cancer and lung disease. But it is also blamed for 40 million periodontitis cases worldwide. Periodontitis is a serious infection that leads to swollen, tender and bleeding gums. It can lead to bad breath, painful chewing and loosening of teeth. The gum infection is usually caused by poor oral hygiene, and can be prevented by brushing at least twice a day and getting regular checkups – but most of all by quitting cigarettes!

Pilates training against back pain

A vast amount of people suffer from back pain. In a world where many jobs are completed at desks and people are getting more and more sedentary, this is not surprising. Our bodies need exercise. Without it, our muscles weaken and our joints become inflamed. Now researchers in Brazil have discovered that regular Pilates exercise can greatly reduce back pain. There is a hitch, however: to reduce back pain, you have to do Pilates at least twice a week and if you stop exercising, your back pain might return.

What does a lack of sleep do?

Do you often sleep less than seven hours because you think it will do? Well, it won't. People who sleep less than 7 hours are 70 percent more likely to have mood and mental health problems, including hopelessness, nervousness and anxiety. This was discovered by researchers at Georgia Southern University, who examined more than 20,000 people in the US and asked about their sleeping habits. The recommended amount of sleep lies between seven and nine hours. So tonight, maybe go to bed a little earlier than usual. It will do you a world of good.

How to lower your blood pressure naturally

Many people suffer from high blood pressure, due to genetic factors but also because they lead unhealthy lives. They are overweight, eat too much salt, drink alcohol or smoke. They take the medication that their doctors prescribe, but forget to do the most helpful thing against hypertension: exercise. Endurance sports such as hiking, running, swimming or cycling are thought to be the best type of exercise for lowering your blood pressure. Doctors recommend to exercise three to five times a week for at least 30 minutes. On top of that, patients should eat less salt and use fresh herbs instead. They should also drink less or no alcohol. Before starting a new exercise routine, patients should talk to their cardiologist to avoid dangerous overexertion.

Cancer doesn't have to be an inevitable destiny. Scientists know exactly what triggers the disease. And everyone can do something against the biggest threats. (12.03.2018)

Despite a decline in the number of smokers in Germany, nearly 85 percent of films show the use of cigarettes, and usually in a too positive light — a dangerous trend, according to Drugs Commissioner Marlene Mortler. (10.01.2018)

Sleep Deprivation and its Consequences

Whether insomnia, sleep deficits or deprivation, when our established sleep cycles are disrupted, it can have serious psychological consequences. (27.05.2015)