The DW choir is on the road again. This time, the international choir is on tour in Greece. The trip is about music - and reconciliation in a country affected by Nazi atrocities. 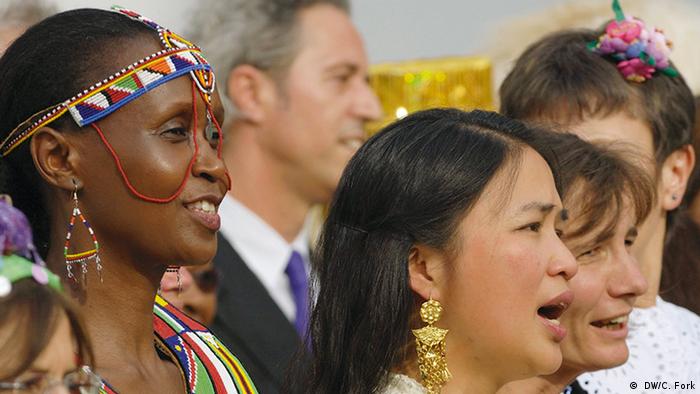 The Deutsche Welle choir started its seven-day Greek trip in Kalavryta, a small town in the northern part of the Peloponnese peninsula - and the site of a massacre by German occupying forces during World War II.

On December 13, 1943, Wehrmacht soldiers shot dead almost every single male inhabitant older than 15 years of age. The killings went down in history as one of the worst war crimes the Nazi army ever committed against civilians. Different sources list from 650 to 1,400 victims.

Reconciliation is the theme of this visit, says DW's Irene Anastassopoulou. She planned the trip and is pleased that the choir's 50 members from more than 20 nations approved of her ideas, including a visit to the town's Holocaust Museum, the massacre memorial site and meetings with high school teachers, students and a 90-year-old witness of the killings.

The Aegean island of Milos is another stop on the choir's tour of Greece. During a vacation stay on the island two years ago, the DW editor and her family discovered a small museum with World War II exhibits.

Her curiosity piqued, Anastassopoulou also learned about a German doctor who had saved the lives of many locals with war injuries, but was killed by partisans on Milos in 1943. Anastassopoulou eventually met with the man's son, who lives in her hometown Cologne - a meeting she says spawned the idea of taking the choir to Greece. The singers, after all,  aim to be more than musical ambassadors.

The choir's visit is a "small yet subtle contribution to nurturing German-Greek relations," she says. The debt crisis as well as Germany's role in the situation - seen as controversial in Greece - "reopened trenches painstakingly filled up over the years," a "grave burden" for bilateral ties, says Irene Anastassopoulou. The Deutsche Welle choir tour comes right on cue, the DW editor says, confident that it will leave a positive impression.

Previous international tours have taken the Deutsche Welle choir to Jerusalem, Barcelona, Vienna and Warsaw. The visit to Greece is but the latest visit with a focus not only on music, but also on remembrance, tolerance and dialogue.