Dutch election focuses on the euro crisis | Europe | News and current affairs from around the continent | DW | 05.09.2012

Dutch concerns about the euro crisis are dominating the election campaign and have led to a sharp increase in socialist popularity in recent polls. Should the German Chancellor Angela Merkel be worried? 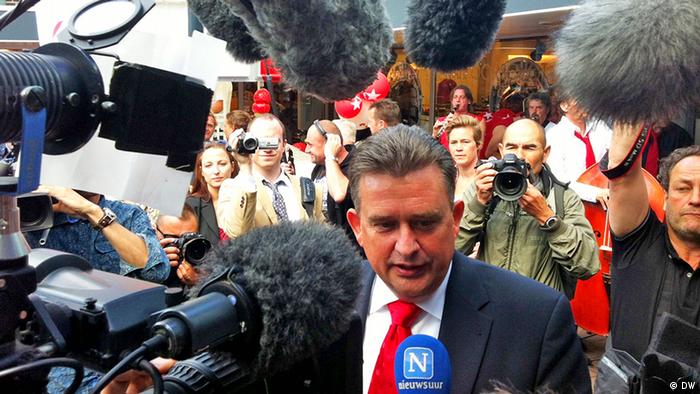 The warm summer weather has returned to the small Dutch town of Boxmeer. An ice cream shop on Steen Street provides locals with place to cool off. The leading candidate for the Socialist Party (SP), Emile Roemer, vigorously scoops the ice cream and doles out a red clump of ice cream into a cone. In the background, the bells of the chapel drone, while dozens of photographers and cameramen snap photos and film the event.

The Socialist Party leader laughs at the disfigured result of his efforts. But that's no problem for Roemer. It's the thought that counts. The powerful politician is offering a special sweet locals will probably have a hard time getting again: tomato ice-cream. The tomato is the symbol of the socialist political party. Back in the day, in the much wilder years, Dutch Socialists enjoyed pelting their political opponents with juicy, red tomatoes.

Since then, the SP has outgrown its"Sturm and Drang" years. In his serious, dark suit and red mute tie, the Socialist could pass as one of the party's class enemies. The party's aim for the election is to get out of the opposition, and the former revolutionaries want to govern and their chances of winning the parliamentary election on September 12 don't look all that bad.

More and more people continue to gather around the red-and-white ice-cream stand, which the Socialist Party built for campaign.

As people congregate around the ice cream stand, the politician enjoys his home field advantage in Boxmeer, it's where Roemer once worked as both a school teacher and deputy mayor. He's quick to get to his main argument of the EU's fiscal policy. "Europe shouldn't just rely on what Brussels says," the 50-year told the crowd. "Too many politicians only think in terms of laws and debt levels." 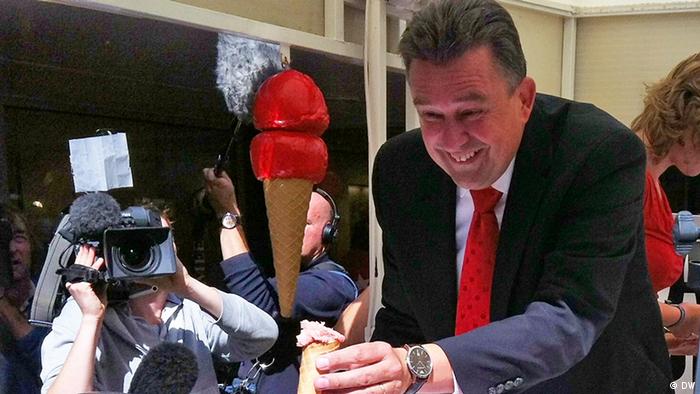 Socialist Party leader Emile Roemer is popular among Dutch voters. But in order to govern, he'll have to form a coalition.

The socialists have benefited from the euro crisis. The SP has enjoyed a sharp increase in voter support, as the Dutch population becomes increasingly anxious about the handling of the euro debt crisis in Brussels. Although SP has slipped in recent polls after Roemer stumbled over some facts in a talk show appearance, the number of SP voters is still higher than expected. The party is predicted to win more than 30 seats of the 150-seat parliament - that's double what the party currently enjoys.

Until recently, the socialists played only minor role in Dutch politics. Critics admonished them as "tomato Maoists" for their leftist ideals. But with the collapse of the previous government in April this year, the popularity of Dutch political parties has shifted. What triggered this was the dispute within the center-right government regarding its EU austerity package. In order to get the budget deficit down at below three percent, the government had to make cuts of around 14 billion euros in public spending. However, Geert Wilders, the leader the right-wing populist Party for Freedom (PVV), withdrew his support of thegovernment in protest against the budget cuts. The Prime Minister Mark Rutte from the right-wing People's Party for Freedom and Democracy (VVD) resigned, prompting an election. 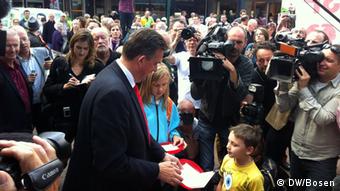 The Socialist Party has seen a sharp increase in voter support.

Roemer had stated that the Dutch government has a responsibility not to save, but to invest and stimulate growth in order to address rising unemployment. Additionally, he had called for a referendum on the EU fiscal treaty calling for austerity measures. These comments have put him not only in direct opposition with Brussels, but also the German Chancellor Angela Merkel. She has repeatedly indicated her preference for both greater fiscal disciplinary power and political power being handed from national capitals to the European Union.

In an interview with DW, Roemer affirmed his ties with Germany saying: "I have absolutely no conflict with Germany and its people. But I do have a conflict witha liberal economic path." When asked whether he stood more politically aligned with the French President Francois Hollande than with Merkel, he replied: "Yes, a little bit, yes."

The chancellor should be alarmed that other Dutch political parties are also referring to the euro crisis in terms she would rather not have to confront in EU meetings. The Dutch Social Democrats, for example, have also seen a sharp improvement in the polls. Their top candidate, Diederik Samson, a 41-year-old nuclear physicist, thinks it's okay to give Greece more time to get their economy on track. Or the right-wing populist Geert Wilders, who has put the headscarf debate on hold, to argue for a return to the guilder, the Netherlands' former currency. All of this suggests the mood among the Dutch population, regardless of which political party wins the election, will create an atmosphere that won't be easy for the EU or Merkel to deal with.

Campaigning until the very end

At the moment, the polls suggest a three-way battle between the Socialist Party (SP), the Labor Party (PvdA), and right-wing People's Party for Freedom and Democracy (VVD). There are 21 parties to choose from and, therefore, a variety of coalition options depending on the election's results.

The smaller parties could play a decisive role and that has kept their top candidates from adhering too stringently a party line that could alienate potential governing coalition partners. There is still time for political wrangling ahead of the elections on September 12.

Europe still most competitive region in the world

Six European nations are in the top ten of the world's most competitive countries, according to the World Economic Forum's Global Competitiveness Report. That's a sruprise, given the protracted eurozone crisis. (05.09.2012)

Germany's economy grew in the second quarter, which will be the last good news for some time. DW's Henrik Böhme says Germany is now being drawn into the euro debt crisis. (15.08.2012)