Dutch Consider New Ways of Holding Back the Waters | Europe | News and current affairs from around the continent | DW | 01.12.2007

Dutch Consider New Ways of Holding Back the Waters

With over half of its population living below sea level, the Netherlands is particularly at risk from the effects of climate change. One new idea is to build an island in the North Sea -- in the shape of a tulip. 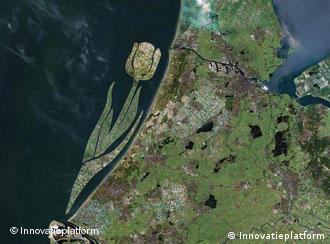 The off-shore island is meant to provide extra land for housing and offer coastal protection to the low-lying nation. The Dutch government has asked a governmental advisory body, the Innovative Platform (IP), to carry out research into the feasibility of the proposal.

IP officials regard it as a good opportunity to showcase the country's expertise in hydro-engineering and water management. The Dutch have been battling against the sea and the threat of floods for centuries and their skills are of world renown.

But up to now, Dutch contractors have only been commissioned to build grandiose projects overseas, in countries like Dubai with its famous Palm Islands. Now, it could become a reality closer to home. And what could be more Dutch than the image of a tulip?

Prime Minister Jan-Peter Balkenende, the chairman of IP, praised the body's work in the water sector.

"We are good at hydraulic engineering and we should hold on to this leadership position," he said. "The tulip island has got the discussion going and has mobilized creative forces. That is just how it should be if we want to innovate."

The project was floated by Joop Atsma, a member of Balkenende's center-right Christian Democratic Appeal party (CDA). Atsma envisages an island around 50,000 to 100,000 hectares in area situated off the coast of the Randstad. This is the country's most populous area and includes the Netherlands' four largest cities: Amsterdam, Rotterdam, The Hague and Utrecht.

A CDA spokeswoman said the research should show if the proposal is affordable. She added that the price of land in the area had risen to such heights that creating an island could bring some relief to the real estate market.

"It could be a solution to the lack of space we have in the Netherlands," she said. "In addition, it could act as a buffer, improving coastal protection."

Worries about the impact of an island 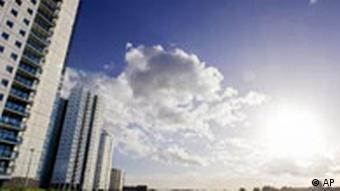 Rivers are set to become an increasing threat in the future

But the idea has triggered mixed reactions. Environmental groups and some hydro-engineering firms believe other solutions might be cheaper, more effective and have less impact on the landscape.

One thing that's clear is that more action is needed to protect the Dutch from the effects of global warming. Experts from the United Nations Intergovernmental Panel on Climate Change project that the sea will rise by anything between 9 and 88 centimeters (3.5 to 35 inches) by the end of the 21st century. Coastal surges are set to become an increasing threat to life and property in years to come.

Holland already has one of the world's most ambitious flood defense systems, which has been described by some as the eighth wonder of the world. Its construction was prompted by the flooding tragedy of 1953, in which more than 1,800 people lost their lives and tens of thousands of people had to be evacuated.

Consisting of dams, sluices, locks, dikes and storm surge barriers, the Delta Works block the estuary mouths of a number of major rivers in the southwest of Holland and controls the entry of water into those rivers that have to remain navigable.

Recent studies have, however, shown that defenses on eight stretches of the coast are too weak. The government is planning to rectify this matter by 2015 and has allocated 741 million euros ($1 billion) to this end.

Ellen Verkoelen, director of the Environmental Federation of Southern Holland, said she believes that an artificial island does not really address this problem. She said she thinks it is more about creating additional space for real estate.

Extending dunes and beaches is another option

Verkoelen said she favors extending the coastline with sand. Her organization has been working with the government on the problem for two years and is about to carry out a pilot scheme to test the idea.

"Five kilometers (3.1 miles) more beach and dunes would give more safety and recreation," she said. "It's also the least expensive way of dealing with the problem. Twenty to 50 years from now we would have a lot of new coast."

"The sea level change can be stopped in this way, but not with the island," she added. "It would have to be an island as big as Holland. This is a marketing strategy. It's the same as in Dubai."

The extension of dunes and beaches is also an idea that could be copied in less wealthy countries with similar problems unlike the costly island project.

A similar solution is supported by the North Sea Foundation, an environmental group. Their spokesman, Jaroan Dagevos, said he is worried about the visual, environmental and even psychological impact of the proposed island, which he said would stretch along about a fifth of the coastline.

"Holland is one of the most crowded countries in the world and if you want to enjoy some open space, you go to the sea," he said. "We don't have many spaces like that. This is one of the last big nature areas in this region.

"We have to do more to keep the coast as it is," he added. "An island is not a solution. The whole view of the North Sea will disappear and this will upset streaming patterns of larvae and fish." 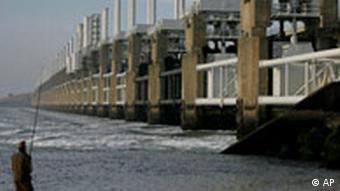 Even the marine contractors responsible for building Dubai's Palm Islands, Van Oord, expressed their backing for a cheaper solution.

"I think it's more realistic to widen the beaches and dunes into the North Sea," said Van Oord's spokesman, Bert Groothuizen. "It's not very revolutionary. The idea has been about for the last 30 years. But it's a very economical option."

The trend generally appears to be towards less interventionist schemes.

"We are moving away from engineering solutions and towards building with nature," he said.

Mark van Zanten, of the maritime consultancy firm Royal Haskoning, took a more positive approach towards the proposed island. He said it would have the advantage of being both a protective measure and an area for potential development.

"We can design it so it will serve both purposes," he said. "If we built it high enough, it will probably be one of the safest places in the Netherlands."

But he did not rule out other coastal protection options.

"We are looking into the possibility of building an artificial reef made of sand and stones that would protect the coast from heavy storms," he said.

Of course, the Netherlands -- once described by the Dutch government as the "drain of Europe" -- does not just face a threat from the sea. Thanks to climate change, the risk of flooding inland is also growing. The Dutch are now leading the way in the design of floating homes. The Technical University in Delft is working on a project that even investigates the possibility of building an entire floating city.

Europe Wracked By Extreme Weather, Over 500 Die From Heat

As Britain grapples with massive flooding, drinking water shortages and a shaky power supply, other parts of Europe are wilting under scorching temperatures. Up to 500 Hungarians and 30 Romanians have died from the heat. (25.07.2007)

The Intergovernmental Panel on Climate Change has said that the world's poorest countries will be affected most by climate change. Though relatively wealthy, Europe will also struggle, a new report says. (12.04.2007)

Europe Takes on Battle Against Flooding

The European Union is working on finding the answers to preventing and limiting floods. Experts are meeting in Vienna this week to tackle the issue. But is the European response to the challenge of floods sufficient? (17.05.2006)

Click here to watch a computer animation of how the waterborne city would look.

What do you think about the idea of building a Tulip-shaped island in the North Sea? Send us an e-mail. Please include your name and country in your reply.