Not all dangerous drugs are banned - and not all banned drugs are more dangerous than legal ones. Here, an overview of legal and illegal narcotics, and what they actually do to those who consume them.

Which drugs should legislators ban, and what can they achieve by legalizing a few of them?

This debate is an emotional one, dividing parliaments throughout the world. Germany's Bundestag is right there with them - stuck on whether marijuana should remain right where it is (illegal) or whether it should be decriminalized in part or full.

But since cultural perceptions and not medical knowledge often carry the day, DW has compiled a "drug dangers" list based on the facts. Depending on your own vice, you might be pleased that parliamentarians don't always take science into account....

Amphetamines, and their close cousin, crystal meth, trigger euphoria, but do not sedate. As a medicine, amphetamines were used well into the 1970s: as antidepressants, appetite suppressants, and for treating asthma. Soldiers use them as stimulants in war, and today, the drug is still being used to treat attention deficit hyperactivity disorder (ADHD). Low doses do not harm human brain cells. Amphetamines, like ecstasy, are a favorite among the techno/dance scene.

Now for the dangers: Amphetamines prevent users from calming down, leading to sleep deprivation, palpitations, shaking and - in the worst case scenario - heart attacks and strokes.

Their addictive potential, according to a report by the House of Commons, (http://news.bbc.co.uk/2/shared/bsp/hi/pdfs/31_07_06_drugsreport.pdf) is somewhere in the middle (1.67). Extended use (as well as overdosing) is toxic. Damage to organs, destruction of muscle tissue and kidney failure can occur. Since amphetamines are usually snorted, the nasal septum can disintegrate. Other effects include paranoid delusions, depression, psychoses and comas.

Cystal meth, considerably more dangerous than amphetamines, can trigger psychic dependency much faster (the addictive potential being between 2.39 and 3.0), with addicts need ever-higher doses. Crystal meth users lose weight fast, their oral and nasal mucosa start to disintegrate, and they lose teeth. 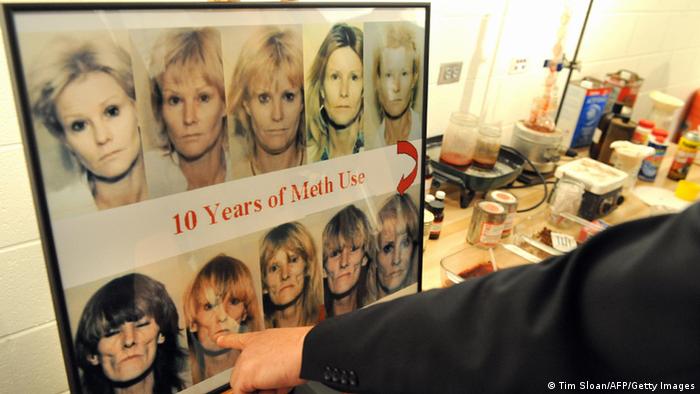 A campaign by US authorities - this is, what meth does to you!

The substance Flunitrazepam - also known as Rohypnol - has the opposite effect. Many amphetamine or meth addicts use it to calm down after a state of euphoria. Typically, it's a sleeping drug. But combined with alcohol or other analgetic substances, it becomes a "K.O. cocktail." Victims who've been drugged with such a mixture remember little to nothing afterwards.

Lastly, the drug is not always sedative: It can also trigger excitement, nightmares and hallucinations.

Heroin is a product of morphine - the primary component of raw opium from poppy flowers. Morphine is legal as a sedative drug, to be used only against the gravest pains - for example, in palliative medicine, or after a heart attack. In contrast to morphine, heroin, with its addictive potential of 3.0, does not only sedate, but also triggers euphoria. The substance therefore interferes with natural sleep.

Overdosing on heroin or morphine can slow down breathing, resulting in lethal apnea. This danger is particularly acute with addicts, who often simultaneously consume heroin and alcohol (or Flunitrazepam).

Still, the public has likely overestimated the toxicity of heroin, viewing it as both highly poisonous and a "junky" drug.

In one German study, long-time addicts were given heroin under supervision, while a control group received the substitute drug methadone (addictive potential 2.08). The result: The heroin patients developed far better than the methadone patients both in regard to health and to their social situation. Later heroin was legalized in Germany to treat addicts. 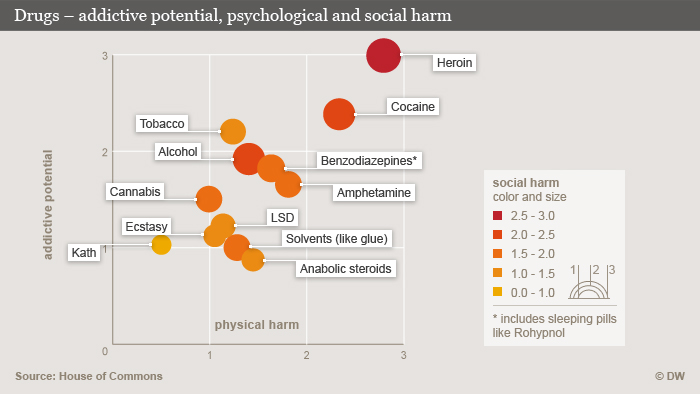 Cocaine (2.39) is the active substance in the coca plant. Heat the cocaine salts and mix them with baking powder, and you have crack.

Cocaine triggers euphoria and reduces hunger and fatigue. It is popular as a party drug and is amongst ambitious, overachieving young males. Those who snort cocaine will pay a price for it, though: a high pulse, narrowed blood vessels, increased blood pressure, and the danger of a heart attack.

Distorted feelings of hunger and thirst, combined with hyperactivity, can emaciate the body. Continued use can result in paranoid hallucinations, including irreversible psychosis. Whoever smokes cocaine will destroy his or her oral mucosa; those who snort it will damage nasal membranes.

Crack cocaine is particularly unpredictable: The lethal dose is almost impossible to calculate, but the substance is much stronger than regular cocaine. Crack has a higher addictive potential than all other drugs, including heroin, but was not listed in the House of Commons report.

Lysergic acid diethylamide is a synthetic drug which triggers stronger perceptions of surroundings. LSD was therefore considered a classic "expansion of consciousness" drug during the hippy movement in the 60s and 70s.

There is therefore a danger that people with certain predispositions can develop irreversible psychosis after using LSD. In colloquial terms: "They get stuck on a trip."

That said, the danger of lethal intoxication is lower than with alcohol or nicotine; the addictive potential is also relatively low, at 1.23. However, the danger of having an accident after taking LSD is high, since users misjudge their surroundings. Hallucinations and ecstatic feelings can also cause irrationality, with reports of users jumping out windows, believing they can fly. 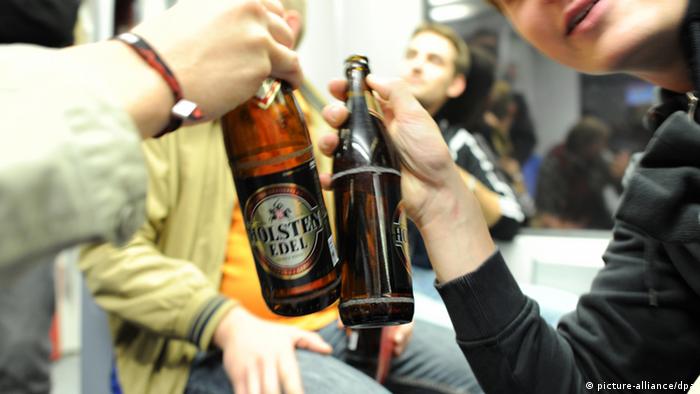 The most dangerous drug: Here, Germans drink beer in a regional train (legally)

Among the group of drugs in the mid-range category "medium addictive potential," alcohol is the most dangerous (1.93). That places it ahead of marijuana, LSD, many sleeping pills, amphetamines and another popular party drug, XTC (or "ecstasy"). Smoking cigarettes is even more addictive (2.21). The only drugs with higher addictive values are cocaine, crack and heroin.

In contrast to illegal drugs, alcohol enjoys broad social acceptance in most non-Muslim countries. People have been drinking wine since ancient times. Smoking was once considered normal and socially acceptable - well into the 1980s.

Alcohol addiction becomes socially unacceptable when it can no longer be disguised, the marker of a "dysfunctional alcoholic." It destroys organs like the liver, pancreas, muscular tissue and the metabolic system. It increases the danger of heart diseases and gastrointestinal cancer.

In Germany alone, about 74,000 people die every year as a result of alcoholism. Smoking kills about 100,000 to 120,000 annually. In terms of quantity, therefore, drinking and smoking are the most lethal addictions. 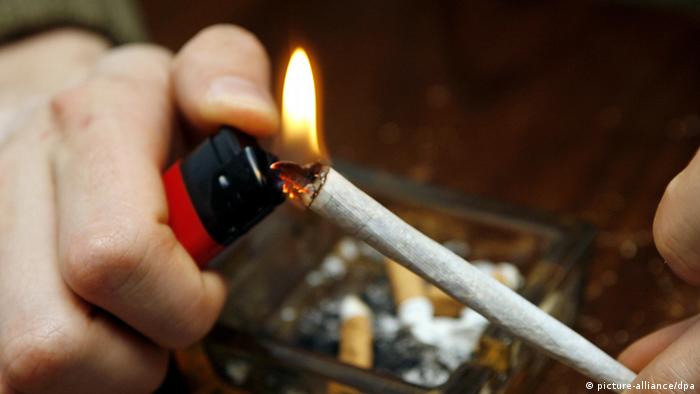 It won't kill him, but he might not remember that it didn't

Legislators in more and more countries are discussing the legalization of pot, whether outright or for medical purposes only. The latter includes use as a sedative or to treat depressed appetites following HIV infection or cancer.

The active substance in cannabis, tetrahydrocannabiol (THC), has both sedative and relaxing qualities. THC results in a more intense sensation of the environment, especially relating to music, taste and the feeling of time. A typical side effect: Munchies for anything salty, sour or sweet. It is practically impossible to inhale or ingest a lethal dose of THC when consuming commercial amounts of pot. Its addictive potential is "medium" (1.51)

Long-time users, however, may suffer losses in thinking and learning capabilities - likely influenced by changes in blood circulation within the brain. Particularly dangerous: Toxic substances that come as a result of smoking pot and inhaling toxic gasses. Those may even be more harmful than those from just cigarettes, since pot has resinous sticky qualities, which could add more harmful particles to the smoke.

A proposal from two German parliamentarians about a relaxed stance on cannabis has been met with criticism. Germany's drug commissioner said the country has enough problems with alcohol and tobacco. (14.05.2015)

Authorites in Germany and the Czech Republic have arrested 15 suspects in Leipzig and Prague after 2.9 metric tons of the chemical chloroephedrine, which is used to make crystal meth, was seized by police. (13.11.2014)