Drawing on Energy in a "Passive" Way

The world's largest office building that makes use of solar energy and the earth's heat to warm it and does away with conventional heating facilities, has been built in Ulm, Germany. 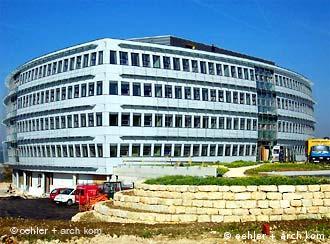 If an office building usually conjures up images of artificially- heated or air-conditioned rooms where the air is stale and the light harsh, it's time to take a look at an architectural innovation that's changing the image of the sterile workplace.

Called a "passive" building on account of its drawing on natural energy sources to maintain an optimal temperature, the biggest office complex of its kind in the world has now been built in Ulm, southern Germany.

Named "Energon", the five-storey building with working space for about 420 employees, is energy-efficient and self-reliant; warming and cooling itself automatically.

The German Ministry of Economics and Technology supported the project, and the scientific Fraunhofer Institute is monitoring the development. Energon is meant to be both an investment and an innovation, according to Pamela Vendt, a spokesperson for the foundation that supports other non-profits to realize projects meant to benefit society.

A passive house maintains an optimum temperature without active heating and cooling systems. No mechanical means are employed to regulate temperature, rather the building "passively" does the work itself. Passive buildings are designed to be extremely well-insulated and to optimally take advantage of the suns rays. Southern orientation is carefully considered in situating the building, as well as the use of shade.

At €12.7 million ($13.4 million), building costs for Energon were comparable to that of a standard office building of the same size. The Software Foundation reckons that running costs will be cheaper than those of a conventional office building, with savings amounting to €30,000 per year. The building also produces 175 tons less carbon dioxide than a normal office building while it provides 7,000 square meters (75,350 square feet) of space for 420 working places in the Science Park II office complex in Ulm. Construction was completed in late October 2002. 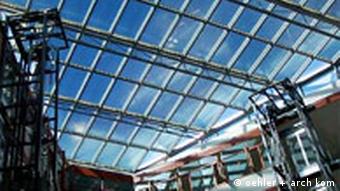 Architects Stefan Oehler and Barbara Faigle won the open competition for the construction of a passive building initiated by the German Software Corporation Foundation.

Their design was a triangular construction with curved facades. Large glass facades, long the fashion in architecture, were out of the question, because they let in or out too much heat. In the building's interior, offices have windows opening on a large glass-roofed atrium, which is central to Energon's temperature regulation.A transparent sun shield automatically covers the glass roof when the sun blazes down to prevent the offices from getting too hot.

Energon regulates temperature by sucking in air from the building's exterior through underground canals, which it then warms or cools with the help of 40 vertical probes extending 100 meters into the ground. At that depth, the surface temperature no longer influences the air temperature, so that the earth's natural temperature of 12 – 14 C cools or heats the air, which then can be further adjusted by a heat exchanging device before it is sucked into the building. The air then circulates into the offices through the atrium and through canals leading from the atrium through the ceilings of the five stories.

Additionally, warm or cold water circulates through pipes in the ceilings for further temperature regulation.

Solar panels on the building's roof provide around 6 percent of Energon's energy needs. In winter, heat gained from spent air can be reused and, if all else fails, air can be warmed from a distant power plant.

Put to the test 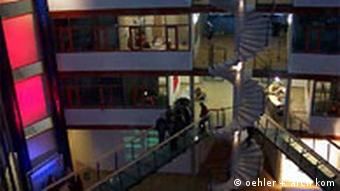 Energon's ability to deal with cold was put to the test over the last three weeks, when freezing temperatures enveloped Germany. "Two weeks long everything went fine," Software Foundation real estate manager Lars Borghaus told DW-WORLD. At the end of the third week though, Energon had to revert to the power plant to warm the incoming air. The fact that only one-quarter of the building is occupied so far means though that Energon isn't able to function to its full potential since bodily warmth too contributes to a toasty room.

Borghaus says that the building has generated a lot of interest. The current poor economic climate in Germany has dampened the real estate market though. Still the Software Foundation is looking forward to gaining more tenants.

World’s Tallest Solar Chimney Going Up Down Under

Advocates of renewable energy may want to look towards the Australian outback: That’s where a German engineering firm is building the world’s largest commercial solar thermal power station. (July 25, 2002)