German playwright and director Tankred Dorst's brand new production of Wagner's 16-hour "Ring" cycle tops the program for the one-month festival and has critics on the edge of their seats. 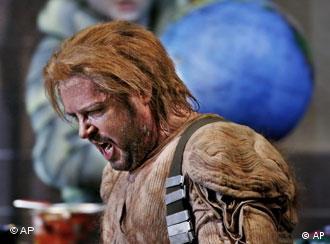 There is plenty of drama, both on and off the stage, at this year's Richard Wagner Festival in Bayreuth. A new production of Wagner's 4-opera magnum opus "The Ring", created in a mere two years by respected German playwright and director Tankred Dorst, has heightened anticipation at the month-long festival that opens Tuesday.

"The Ring" cycle is 80-year-old Dorst's first dabble in music theater, though he's a veteran of other staged genres. Everyone, from the janitor to the star soprano, is sworn to secrecy on what Dorst's production entails, though it is expected to take place in modern times and be less daring than recent stagings.

Wagner lovers worldwide are hoping that the 13th version of the 16-hour cycle to come out of Bayreuth will offer a fresh interpretation and a radical new reading of the work. 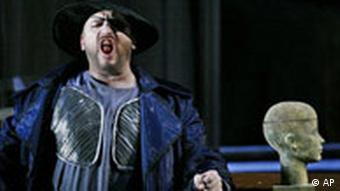 "Based on the dress rehearsals, this year's production exceeds the artistic standards of the previous years," said Arnold Jacobshagen, a musicology professor from Bayreuth University, who called Dorst's staging "a good compromise" between conservative and disturbing elements.

Inevitably, whatever comes across the stage in the three complete performances of "The Ring" will be critically compared to 31-year-old Patrice Chereau's 1976 version, which was at first harshly criticized but later acclaimed as an achievement "of the century."

Jacobshagen said a comparison between Chereau's and Dorst's productions would be reaching a bit too far, but the musicologist and Wagner expert predicted the latest "Ring" production would be remembered in a positive light.

Dorst was asked to take over the Bayreuth project when controversial Danish filmmaker Lars von Trier suddenly backed out in June 2004.

Von Trier had already completed measurements of Wagener's purpose-built Festspielhaus and thought through what would likely have been a dark production before he abruptly stepped down -- leaving a few unanswered questions and adding a touch of mystery to the festival.

He did give one hint to the reason behind his decision to leave, "Due to my pathological tendency to perfectionism, it simply would have become hell," Die Welt am Sonntag quoted from von Trier's official statement. 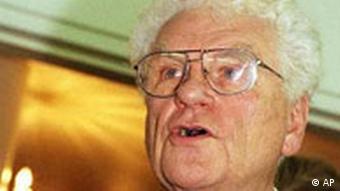 Well acquainted with other worlds

Dorst proved his capacity for large-scale, myth-based works with "Merlin," an eight-hour play. His experience with the otherworldly lends itself to Wagner's masterpiece, which is based on Teutonic mythology.

"The Ring" tetralogy consists of "Rhinegold," "The Valkyrie," "Siegfried" and "Twilight of the Gods," which tell the tale of a ring with special powers. Wagner first toyed with the idea of composing a work based on the Old Norse Nibelungen saga in 1848. He finished the libretto in 1850, but the four operas weren't completed until 1874.

"The Ring" cycle was first performed in its entirety in 1876 at the first-ever Bayreuth Festival, an idea conceived by Wagner himself.

Today, 130 years later, the Bayreuth Festival is under the direction of the composer's 86-year-old grandson Wolfgang Wagner. Wolfgang took over the reigns of the festival completely in 1966 after the death of his brother Wieland, with whom he managed the annual event for 15 years.

After four decades of control, some critics tend to blame him for "artistic stagnation," as described in a recent Süddeutsche Zeitung Magazin article. According to the critics, Wolfgang Wagner has assumed the role of the monarch behind the stage and has had a difficult time relinquishing his leadership despite the pull of time. 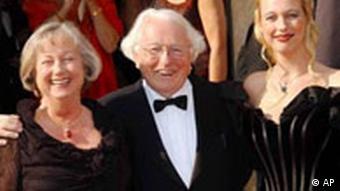 Nevertheless, he has been open to numerous avant-garde directors -- like Christoph Schlingensief, whose iconoclastic version of "Parsifal" will be performed five times at this year's festival, and Switzerland's Christoph Marthaler, whose "Tristan and Isolde" will be revived on Aug. 1 after its debut at the 2005 festival.

"The word 'stress' doesn't exist for me," he said in an interview with Süddeutsche Zeitung Magazin. "I don't overestimate myself, and I know what I can and have to do. But if someone comes up who is suited to take over the festival -- why not?"

It appears that "someone" will be his daughter Katharina Wagner, who is set to make her Bayreuth Festival director debut in 2007 with a production of "The Mastersingers of Nuremberg."

Jacobshagen said it's fairly clear that Katharina will run the show at some point.

"Changes are desperately needed on the musical side," the professor said, adding that Bayreuth seldom gets the best singers in the business. "To save money, the singers aren't paid according to international standards." 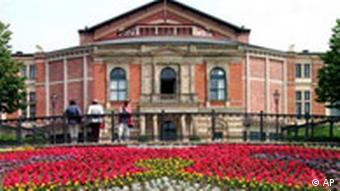 The Festspielhaus in Bayreuth was constructed in 1872

Though Bayreuth is the only place in the world where Wagner fans can see the entire "Ring" within a week -- other opera companies space the four operas out over several seasons -- the quality of Wagner performances is higher in New York or Vienna, according to Jacobshagen.

The musicologist said he expects to see a considerable increase in ticket price within the next few years, which could give the festival more negotiating leeway with international stars.

Currently, the most expensive seat in the house on the legendary "Green Hill" costs 208 euros ($264), but the waiting list to get a hold of a ticket can run as long as 10 years.

Is it worth the wait? The curtain opens Tuesday.

Tuesday's gala features a performance of "The Flying Dutchman", composed in 1841. The first of three complete performances of "The Ring" begins Wednesday with Christian Thielemann conducting. "Tristan and Isolde" and "Parsifal" will also be performed five times each during the month long festival.

Katharina Wagner, the 27-year-old great-granddaughter of composer Richard Wagner, was booed at the premiere of her new production of Giacomo Puccini's three one-act operas, "Il Trittico," in the Deutsche Oper Berlin. (Jan. 10, 2006)

It's been a long road from CBGB's to Bayreuth but punk legend Patti Smith seems to have made the transition a smooth one. (Aug. 1, 2005)