The ruling coalition of outgoing DRC President Joseph Kabila has retained its majority in the national assembly. The result reduces the chances of dramatic reforms under president-elect Felix Tshisekedi. 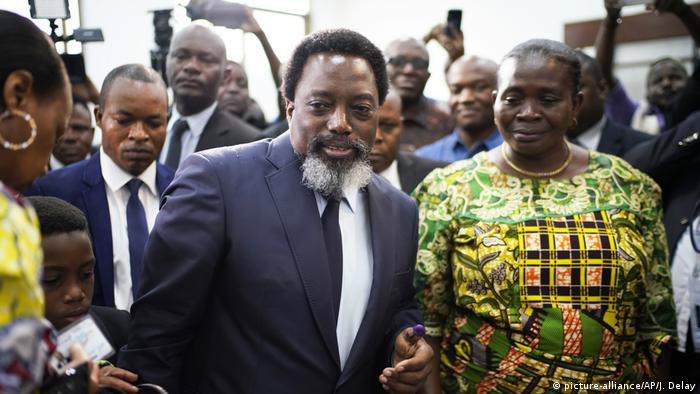 The Democratic Republic of Congo's electoral commission (CENI) announced early Saturday that the ruling coalition of outgoing President Joseph Kabila (pictured above) had won at least 290 seats in the country's 500-member National Assembly.

The coalition's majority may increase as elections were delayed until March in several regions due to an Ebola outbreak and militia violence. There remain 15 parliamentary seats up for grabs.

The National Assembly result comes despite the victory of opposition leader Felix Tshisekedi in DRC's presidential vote on the same day. The result may complicate Tshisekedi's efforts to break away from the country's Kabila era.

Kabila, 47, is to step down in the coming days after leading the mineral-rich country for 18 years. The transition to Tshisekedi, who won 38 percent of the vote according to CENI, will mark the DRC's first democratic transfer of power in 59 years of independence.

Under the nation's constitution, the parliamentary majority has significant powers and the president must appoint a prime minister from its ranks. The prime minister must, in turn, countersign presidential orders appointing or dismissing judges as well as heads of military and of state-owned enterprises.

Martin Fayulu, whom CENI declared the runner-up in the presidential election with 34 percent of the vote, said on Saturday that he will challenge this month's election result.

In a tweet on Saturday, Fayulu said the election results "were invented out of whole cloth. I demand a hand recount of all votes for the three elections (presidential, national legislative and provincial)."

He accused Tshisekedi of a backroom deal with Kabila after the president's hand-picked candidate, Emmanuel Ramazani Shadary, finished a distant third with 24 percent of the vote.

Fayulu later told DW: "The people want their victory. The people won't accept strange arrangements ... You can't go into a back room and start producing the numbers for Mr. Kabila to return to power tomorrow. This is unacceptable."

Fayulu's opposition coalition on Friday said that he won 61 percent of the vote, citing figures compiled by the Catholic Church's 40,000 election observers stationed across the country. The church, a rare institution that the Congolese find trustworthy, has called on CENI to release detailed voting results.

Lawyers representing Fayulu were on their way to Congo's highest court on Saturday to contest the election. Meanwhile, 50 Republican Guard soldiers and police officers surrounded the opposition candidate's residence in Kinshasa.

Fair gold from the Democratic Republic of Congo

First the voting was delayed, now the results are being contested. It has been a difficult election for the Democratic Republic of Congo and its citizens, who are longing for peace, says DW's Dirke Köpp. (10.01.2019)

Internet, SMS messages and media have been restricted for a second day following a chaotic election. The opposition claims the government is committing election fraud. (01.01.2019)