DR Congo: More than 50 killed in gold mine collapse

The collapse was triggered by torrential rainfall in the Democratic Republic of Congo's South Kivu province. Hundreds of mostly young men were working in the dangerous gold mines when the accident happened. 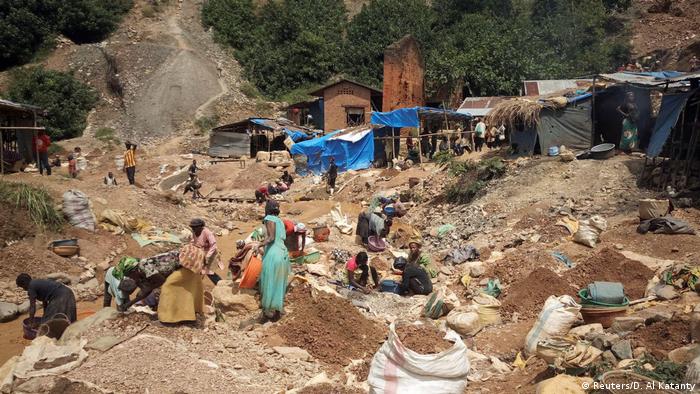 More than 50 people were killed when three small-scale gold mines in the eastern Democratic of Republic Congo collapsed on Friday, officials have confirmed.

A landslide triggered by days of heavy rains in the South Kivu region near to the mines caused the cave-in.

Dozens of people die each year in accidents in largely unregulated artisanal mines in the DRC, where often ill-equipped workers dig for globally sought-after raw materials such as gold, copper and cobalt.

'No chance' of survival

Heavy rain on Thursday and Friday caused the nearby Njali river to burst its banks, sending water and mud down into the mining pit.

"The miners and the stone carriers were swallowed up by the waters," said the mayor of nearby town Kamituga, Alexandre Bundya.

"A team of rescuers with motor pumps came to recover the bodies of the victims."

"Their bodies are buried under the rubble, there is no chance that there will be any survivors," added the town's deputy mayor, Ngandu Kamundala.

Most of the dead are thought to be young people, according to a statement from the office of the governor of South Kivu, Theo Ngwabidje Kasi.

Kamituga town officials decreed "two days of mourning and anger" to "not only mourn our compatriots but also denounce the precarious conditions in which all the miners work."

"Investigations continue to identify our deceased compatriots, to provide assistance and to take measures to prevent the recurrence of such tragedies,'' the office of the governor of South Kivu added.

Small-scale miners have become major mineral suppliers to international companies such as Glencore and Barrick Gold, usually through intermediaries. The mines that they work at are often the scene of fatal accidents but few incidents are documented.