Emergency response crews have evacuated dozens of passengers trapped on cable cars over the iconic Rhine River in Cologne. A total of 65 people were believed trapped on the skyway in the western German city. 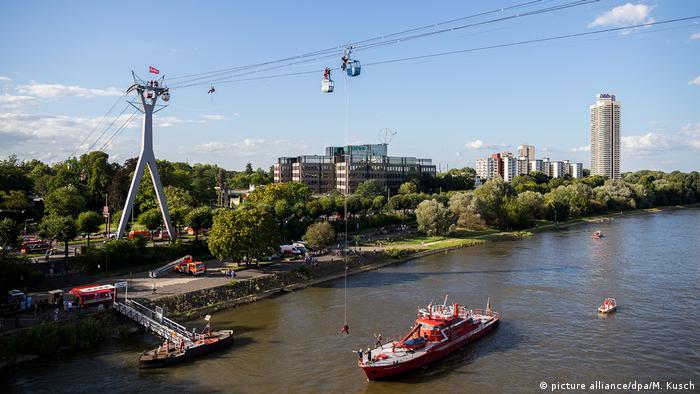 Fire crews on Sunday evacuated 65 passengers stuck in suspended cable cars running over the Rhine River in the western German city of Cologne after a gondola crashed into a support pillar.

Authorities said 32 cars were operating when the incident occurred on Sunday, leaving the passengers stuck 40 meters (130 feet) above the river.

Passengers were reportedly trapped in the gondolas for roughly two hours before fire crews arrived at the scene, according to local media reports. Fire crews managed to evacuate all the passengers safely. Transport officials said the cable cars will receive a new public safety inspection to ensure the skyway adheres to safety standards.

A spokesperson for Cologne KVB public transport system told reporters: "we have no idea how something like this could happen." Officials have ruled out the weather as a potential cause for the accident, as winds weren't strong enough to jeopardize the cable car system.

A local news organization meanwhile shared this footage on Twitter:

The incident occured when one of the gondolas got stuck, stopping all others. The gondolas have been running over the Rhine River for 60 years and are one of the city's tourist attractions.

The last safety incident on Cologne's cable car system happened in October 2014, when a strong wind jolted one of the gondolas, trapping a family inside. Authorities said, however, that the two incidents bore no similarity to each other.

The operators of the cable car meanwhile reassured the public that it remained one of the safest modes of transport in Cologne.

Coronavirus digest: US lifts travel bans on EU, UK and Brazil 4m ago