Dozens killed in floods in Assam and Bihar

Torrential monsoon rains have claimed the lives of more than 50 people in eastern India. Authorities are trying to rescue tens of thousands of others trapped in flooded villages. 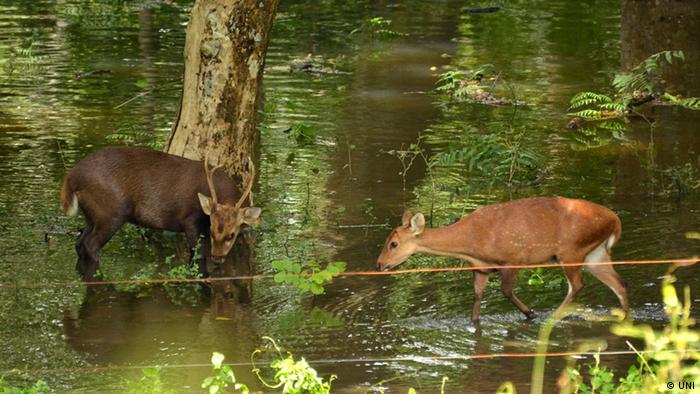 At least 26 people died in the state of Assam, where rivers burst their banks and flooded low-lying areas. The Brahmaputra River and its tributaries were overflowing their banks and washing away roads and highways. At least 14 districts in the eastern state were flooded.

"The flood situation is really grim. Twenty-six people have died over seven days and some 3.6 million people are affected," Interior Minister Rajnath Singh told reporters in the city of Guwahati.

"No efforts are being spared to help the people. The NDRF [National Disaster Response Force] and army are doing their best. Some 60 boats have been pressed to service to rescue people," he added. Rescued people were being accommodated in makeshift tents on roads and highways.

Vast areas of Assam, a prominent tea-growing state and home to the one-horned rhinoceros, were submerged, the state government said in a statement. Forest officials found the corpses of six rhinos, which drowned in the flood waters in Kaziranga national reserve.

Twenty-six people were killed and thousands displaced in Bihar, the Press Trust of India (PTI) said. The state government was running more than 350 relief camps to provide food and shelter to the victims.

Hundreds of people die in torrential rains that strike the Indian subcontinent from June to September every year. More than 90 people have died in Nepal after heavy rains triggered landslides in the Himalayan country.

Fresh landslides in Sri Lanka have been reported as rescue workers try to reach residents in the capital stranded by floods. Poor weather conditions have hindered rescue operations, with hundreds still missing. (21.05.2016)