Fifty-four people were arrested Friday night after clashes during a demonstration in Vienna, Austria. About 5,000 people were protesting against a ball sponsored by the right-wing Freedom Party of Austria. 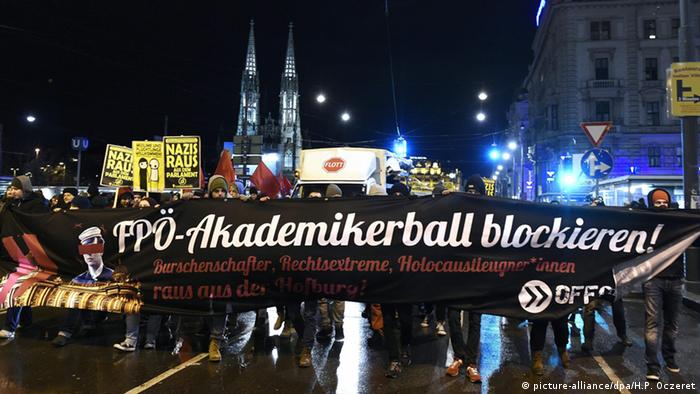 Thousands of demonstrators protested against the Academy Ball in Vienna on Friday night, saying that the black-tie event was drawing a far-right fringe from all over Europe. Scuffles broke out and six police officers were injured during the clashes with the demonstrators. According to the police, one officer suffered trauma caused by a blast and at least one protester was also injured.

The annual ball is sponsored by the right-wing Freedom Party of Austria (FPÖ), whose supporters range from euroskeptics to the far-right fringe. "This is not a harmless dance event, but a meeting where Europe's extreme right comes to network," said Käthe Lichtner, one of the left-wing activists who organized the protests.

The Academy Ball is also controversial because of its location - it is held in the former imperial palace (Hofburg) on the Heldenplatz, the square where Adolf Hitler proclaimed the annexation of Austria.

Radical demonstrators protesting against the Academy Ball caused considerable damage last year, estimated to have been over 1 million euros ($1.3 million). This year, businesses closed shop before the event.

Left-wing groups in Austria often criticize some of the more opulent balls, but no other black-tie event causes as much controversy as the Academy Ball.