An explosion at a bus stop in northern Nigeria has killed at least five people and wounded another 12. Boko Haram Islamists are likely to be blamed, casting doubt over government reports of a ceasefire with the rebels. 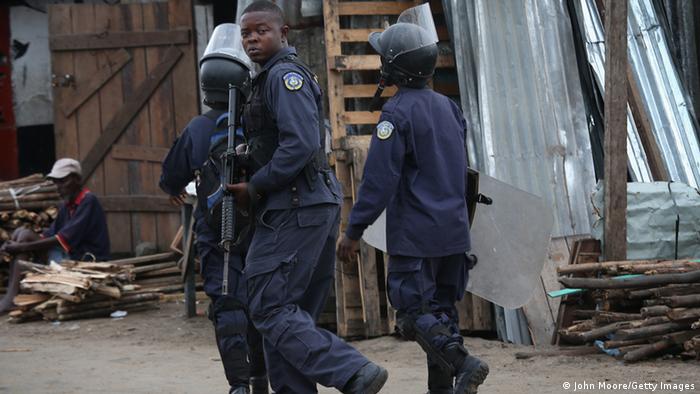 At least five people have died and another 12 have been wounded following a bomb blast late on Wednesday at a bus stop in the northern Nigerian state of Bauchi, police said on Thursday.

"At about 9.45 pm (20.45 GMT) there was a bomb blast at [a] motor park roundabout in Azare town," police spokesman Mohammed Haruna said. "Five persons burnt beyond recognition were certified dead, while twelve others sustained various degrees of injury."

Police did not comment on who was responsible for the attack, saying that "no arrest has yet been made, but an investigation has commenced." Islamist militants Boko Haram, however, are likely to be blamed.

In light of this suspicion, further doubt has been cast on government reports on Fridaythat it had struck a two-part deal with Boko Haram, including a ceasefire and the release of 219 schoolgirls, whose abduction last April sparked international outrage and the global movement, "Bring back our girls." Boko Haram, whose name loosely translates to "Western education is sacrilege," has demanded the release of detainees in exchange for the girls.

"Boko Haram issued the ceasefire as a result of the discussions we have been having with them," said Hassan Tukur on Friday, who represented the Nigerian government at talks with the militant organization in neighboring Chad.

"They have agreed to release the Chibok girls," he said, referring to the town where the girls were seized.

Since last Friday's announcement, however, there have been reports of five attacks by Boko Haram in northeastern Nigeria, leaving dozens dead and calling into question the actual extent of any agreed ceasefire.

Since a bloody government crackdown in 2009, Boko Haram has led a broad insurgency which has been characterized by a brutal campaign of bombings and shootings targeting Christian churches, Muslim mosques, schools, markets, bars, villages, police stations and even a UN building. An estimated 5,000 Nigerians have been killed and a further 300,000 displaced by the violence.

A ceasefire agreement between Boko Haram and the Nigerian government was expected to lead to the liberation of more than 200 school girls kidnapped by the militants six months ago. That was not the case. (20.10.2014)