The Nobel Prize-winning author Doris Lessing, who died in 2013 at the age of 94, would have been 100 on October 22. The prolific writer and reluctant feminist icon was one of the 20th century's great storytellers. 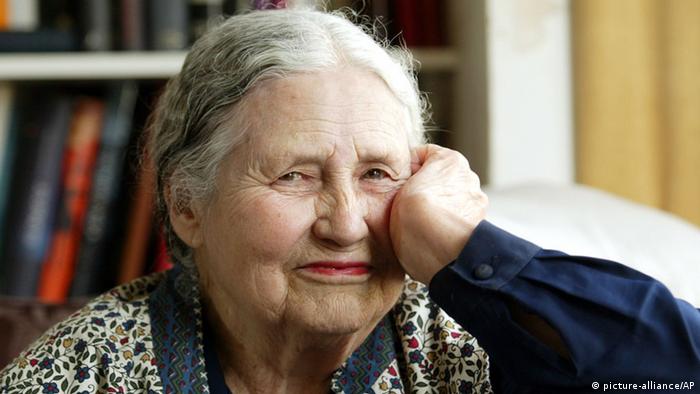 Unsentimental, provocative and uncompromising, Doris Lessing's formidable literary oeuvre wove together the threads of lived experience and world history with an unswerving commitment to the art of storytelling.

Born Doris May Tayler on October 22, 1919, in Kermanshah, Persia (now Iran), Lessing would later come to realize that her parents had been "very much done in" by the First World War. Her father was nearly killed by shrapnel in 1917 and lost a leg. Her mother, a nurse, met Lessing's father at the hospital in London where he was recovering from the amputation.

In 1925 the family moved to the British colony of Southern Rhodesia (now Zimbabwe) to farm maize, but always struggled to make a living. It was, by all accounts, an unhappy childhood for Lessing, who said she couldn't remember a time when she wasn't fighting or running away from the mother she hated in a cold, inhuman and provincial society she despised in equal measure.

Immersed in books sent over from a London book club, Lessing left school at the age of 14 and moved to Salisbury (now Harare) to work as a telephone operator. There, at the age of 19, she married her first husband, Frank Wisdom. They had two children, John and Jean, before divorcing in 1943. "There is no boredom like that of an intelligent woman who spends all day with a very small child," is how Lessing would later characterize this period. 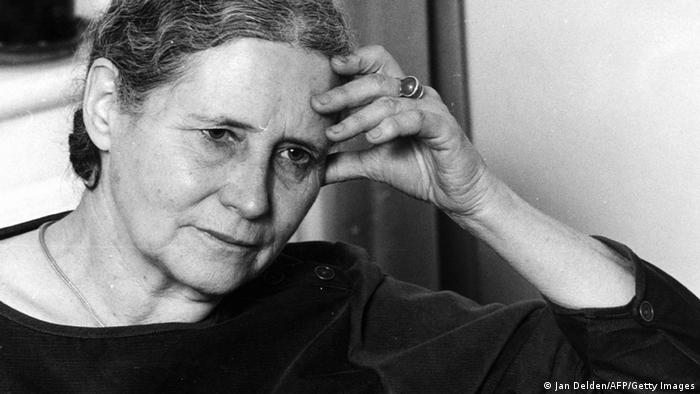 Lessing at her home in London, England

In the wake of the divorce and influenced by the influx of European immigrants in Salisbury, many of them Jewish intellectuals who had fled the Nazi regime, Lessing experienced a political awakening. It was as a member of the communist Left Book Club that she met and married her second husband, German refugee Gottfried Lessing. Their only child together, Peter, was born in 1947.

Following the breakdown of her second marriage, Lessing left her two eldest children from her first marriage in the care of their father and his second wife and moved to England, taking her son Peter, a large collection of books, and the manuscript for her first novel, The Grass is Singing. She would spend the rest of her life confronted with questions about her decision to leave John and Jean in Africa.

Lessing arrived in England as a single mother with no formal qualifications, but rose to become one of the most important figures in post-war English literature. Her literary debut about interracial relations in Southern Rhodesia, published in 1950, astonished audiences in Europe and the US.

Reprinted seven times in five months, The Grass is Singing was told almost entirely in the form of an extended flashback, combining autobiographical observations from Lessing's own childhood with a searing social critique of the colonial injustices of that "very ugly, nasty little society."

Following her early success, Lessing paid a family to take care of her son Peter for long periods, thus enabling her to concentrate on her writing. In 1954 she was awarded the Somerset Maugham Prize for Five Short Novels (1953) - the first of many accolades.

Mixing with members of the left-wing literary intelligentsia, among them John Berger, John Osborne and Bertrand Russell, Lessing became an active member of the Campaign for Nuclear Disarmament and an outspoken critic of apartheid in South Africa. For decades she was banned from entering South Africa and Rhodesia on account of her political views. 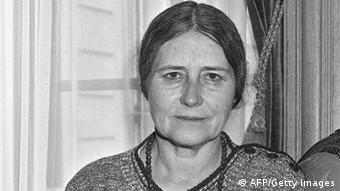 In Paris in 1976, after receiving the Prix Médicis

Always committed to her writing, Lessing became a reluctant feminist icon with the release of what many still regard as her greatest work, The Golden Notebook, in 1962. Exploring the themes of feminism, communism, motherhood, and mental breakdown, the non-chronological novel told the story of Anna Wulf, a writer attempting to weave together the various aspects of her life as recorded in four separate notebooks.

"So I became 'a feminist icon.' But what had I said in 'The Golden Notebook?' That any kind of single-mindedness, narrowness, obsession, was bound to lead to mental disorder, if not madness," Lessing said.

Described by the English novelist and critic Margaret Drabble as "a writer who said the unsayable, thought the unthinkable, and fearlessly put it down there," Lessing would go on to describe The Golden Notebook as her albatross.

Lauded for her feminism and social realism, in the intervening years, an ever-spirited Lessing appeared to forge a career out of abandoning her disciples.

Disillusioned with communism, she discovered Sufi mysticism in the mid-1960s and wrote a series of five science-fiction novels known as the Canopus in Argos sequence. Charting the evolution of various futuristic civilizations, Lessing preferred to describe the sequence - unpopular among the majority of literary critics - as "space fiction."

Frustrated with the literary establishment and true to her rebellious form, Lessing published two novels under the pseudonym Jane Somers: The Diary of a Good Neighbor (1983) and If the Old Could… (1984). The intention was to highlight how poorly unknown novelists were treated, and indeed, her two British publishers rejected the manuscripts.

"I've been close to the literary machine now for a long time. I know what's good about it and what's bad about it. It's not the publishers I've had it in for so much as the reviewers and the critics, whom I find extraordinarily predictable," Lessing said, admitting that she felt "caged" by so-called experts on her work.

Frequently painted as a "professional contrarian," in 2007 Lessing was awarded the Nobel Prize for Literature. The Swedish jury lavished praise on the author, describing her as "that epicist of the female experience, who with skepticism, fire and visionary power has subjected a divided civilization to scrutiny." 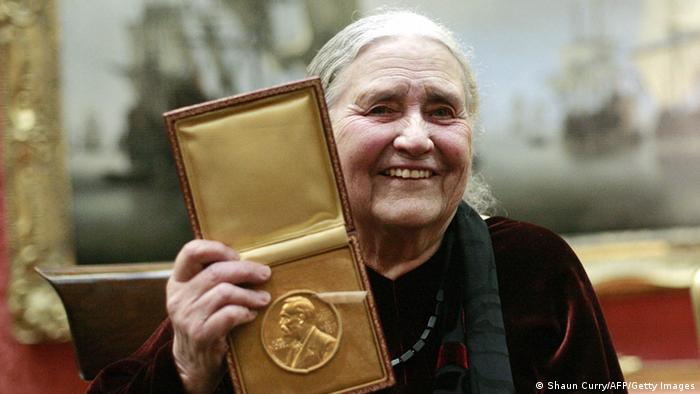 Climbing out of a taxi outside her West Hampstead home, Lessing famously responded to news of the award with "Oh Christ!" and a sigh. Later she would often complain that the prestigious accolade left her little time to write, occupied as she was with signings, interviews and a variety of other Nobel obligations that she referred to as "torments."

Lessing completed her memoirs in two volumes: Under My Skin (1994) charted her life to 1949, while Walking in the Shade (1997) detailed the period from 1949 to 1962. The author explained that she did not write a third volume of her autobiography so as not to offend "many great and eminent people by reminding them of their silliness," adding, "I just can't be bothered, to be honest." 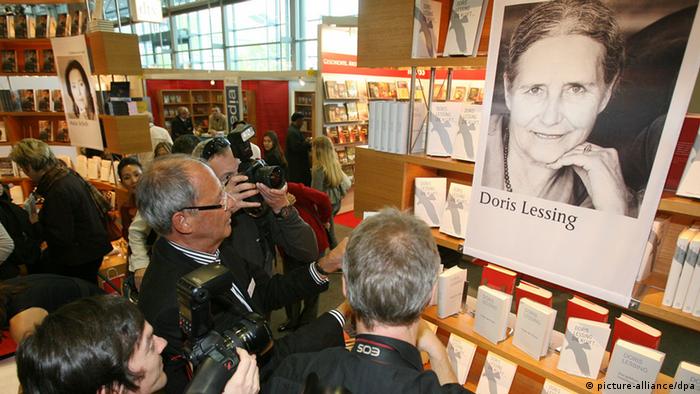 In her final book, Alfred & Emily (2008), the prolific writer returned full circle to her childhood in Southern Rhodesia. The first half is a novella about how life might have been for her parents, had they escaped the horrors of the First World War; the second half is a biography her parents.

"The Great War squatted over my childhood," Lessing said. "The trenches were as present to me as anything I actually saw around me. And my parents never passed up an opportunity to make me feel miserable about the past."

Utterly dismissive of all forms of sentimentality and a proponent of "non-linear thinking," Lessing never bowed to convention or expectation. The novelist, playwright, poet, biographer, librettist and essayist was first and foremost a storyteller, one whose faith in the power of the written word never wavered.

"I don't know why I have to write," Lessing once said. "It's just something I have to do. If I don't write for any length of time, I get very irritable. If I had to stop, I would probably start wandering the streets, telling myself stories out loud."

In what would have been her 100th year, Doris Lessing will remain just that: a formidable, multifaceted and provocative teller of stories for generations of readers to come.

Experts say they have found no evidence that the Chilean poet Pablo Neruda was fatally poisoned. It had been alleged that the Nobel Prize winner was targeted for assassination by the regime of General Augusto Pinochet. (08.11.2013)