Donald Trump to become next US president

GOP firebrand Donald Trump has won the US electoral vote, sending shock waves around the globe. Financial markets plummeted amidst the back-and-forth of the tense election. 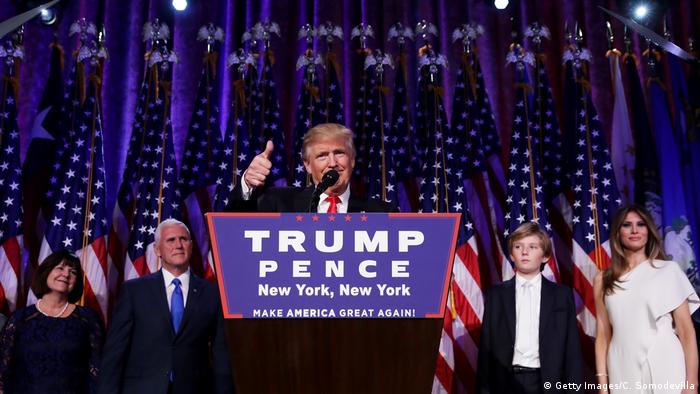 "It is time for us to come together as one united people," he said. To those who didn't vote for him, he said he was reaching out for guidance and help to lead the country.

"Ours was not a campaign but a movement, comprised of people from all backgrounds and religions. Working together we will work on the urgent task of rebuilding America," Trump told his supporters. "No dream is too big, no challenge is too great," he insisted, saying America would no longer settle for "anything less than the best." He said his government would put America's interests first, but make sure that everyone was fairly dealt with. Addressing the international community, he said "We will see common ground, not hostility, partnership, not conflict."

Earlier, jubilation and chants of "lock her up" erupted at Trump's election headquarters in Manhattan after it was announced that he had won the key state of Pennsylvania, making his victory almost certain after a suspenseful night in which some states were decided by a razor-thin margin.

The Clinton campaign had earlier refused to concede as the race remained tight, but during his speech, Trump said his opponent had called and congratulated the Republicans on their victory.

Another decisive factor was the relatively high numbers for third-party candidates, Libertarian Gary Johnson and Green Jill Stein, siphoning votes away from the major parties. With over 3 million votes, Johnson became the most successful third-party candidate since 1996.

"Congratulations to the new president of the United States Donald Trump and to the free American people!" she wrote on Twitter.

The result came as a shock to many as Clinton had a steady lead in the weeks before the election. She lost significant momentum when FBI Director James Comey announced the Bureau was reopening an investigation into her use of a private e-mail server while Secretary of State, only to close it again a few days later.

Reactions from around the world were similarly astounded that a man who has no political experience and has made so many offensive comments about women and immigrants would be able to take the White House.

German Defense Minister Ursula von der Leyen told public broadcaster ARD that the Trump victory came as a "huge shock." She added "I think Trump knows that this was not a vote for him but rather against Washington, against the establishment."

Norbert Röttgen, a lawmaker which Chancellor Angela Merkel's Christian Democrats (CDU), summed up the German uneasiness toward the election when he said, "We're realizing now that we have no idea what this American president will do if the voice of anger enters office and the voice of anger becomes the most powerful man in the world."

Markets on a rollercoaster over Trump win

The nail-biting race wrecked havoc on financial markets as the uncertainty of the race played out across the stock market. Futures for the Dow Jones Industrial Average tumbled a massive 1,000 points. Japan's Nikkei Index was down 2.23% and both the US dollar and Mexican peso plummeted.

Social media overnight showed a glimpse of a tense and anxious America, with many complaining that the constant back-and-forth of the 24 hour news cycle was making an uneasy election even more difficult to cope with.

"Right now the election is too close to call and too terrifying to contemplate…it's a nail-biter and a passport-grabber," said the Late Show's Stephen Colbert midway through the night, expressing a sentiment felt by many Clinton supporters.

Many began to express their dismay as the possibility of a Trump presidency became more and more realistic.

The demographic breakdown revealed a deeply divided United States, with African American and Latino voters overwhelmingly choosing Clinton, and the majority of white voters selecting Trump. Early projections saw a vast increase in voter turnout over the 2012 election, with USA Today reporting a 4.7% increase. Ninety million people were expected to cast a ballot, a historic number of voters, if not an unprecedented percentage.

All in all, it was a successful night for the Republican party as they maintained control of both houses of the US congress.

Donald Trump is inching closer to the White House, with several states too close to call. The staggering results have sent shock waves across the globe. Read the latest here. (08.11.2016)