Donald Trump, the presidential hopeful who baffles Europe | World | Breaking news and perspectives from around the globe | DW | 21.07.2015

He's leading some polls when it comes to Republican presidential candidates, but most Germans, and other Europeans, have a hard time taking 'The Donald' seriously. That's because their expectations of politicians differ. 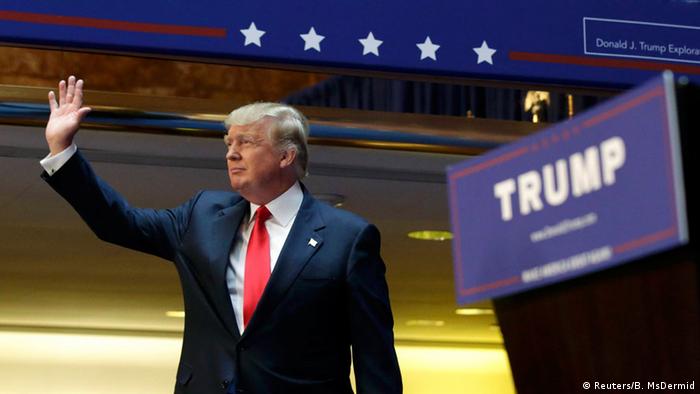 Donald Trump is running for president. What might still sound a little curious to US ears is unbelievable for most Germans. Someone without any political experience is aiming for the country's highest office, making statements that veer from bragging about his wealth to joking about John McCain's capture in the Vietnam War. People in Europe are baffled - the most "outrageous" personality that politically minded Europeans have recently encountered was a motorcycle-riding finance minister.

So why is someone like Yanis Varoufakis such an anomaly at the cabinet level in Europe, while Donald Trump is leading some polls of Republican presidential candidates in the US? Europeans and Americans value different qualities in their politicians, says Christopher Cermak, a US journalist with the online news site "Handelsblatt Global Edition" in Berlin. 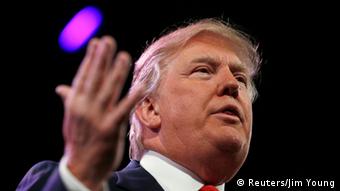 Trump is known for his bluntness: 'It's nice. I'm really rich.'

"Trump has come from the private sector and is seen as somebody who is speaking truth to politics" in the US, Cermak, who covered the US presidential elections in 2008 for news agency dpa, told DW.

"People like a colorful figure in the States. In Europe, the media and also the public, I think, like politicians to be a little understated."

Not your average politician

Donald Trump is definitely a colorful figure. The multi-billionaire is known for his business success and for hosting the reality TV show "The Apprentice." He announced his run for the Republican presidential nomination at his lavish Trump Tower, a high-rise on New York City's famed Fifth Avenue, after descending to the stage on an escalator.

The real estate mogul never holds back and has become a media favorite for his outspoken statements. Saying that he owns "a Gucci store that's worth more than (2012 presidential candidate Mitt) Romney" is on the harmless side. More controversial were his statements about Mexican immigrants. He tweeted that Mexico wasn't a friend of the US and said Mexican immigrants brought drugs, crime and rape to the US.

"A person like Donald Trump is great for the media," said Christian Lammert, professor for American politics at the John F. Kennedy Institute for North American Studies at the Freie Universität Berlin. And Cermak agrees: "Trump generates coverage."

In Germany, Trump's candidacy is reported on in greater detail than that of other contenders because he's a familiar name, Lammert told DW. The only candidates that receive similar attention are Hillary Clinton and Jeb Bush - and that's because people already know who they are due to their family ties.

A decisive difference between coverage in the US and Germany goes back to the media systems. In the US, there are two more easily differentiable camps, so people with strictly right- or left-wing views can tune into TV channels or read newspapers that confirm their political views.

"A guy like Trump really works for this polarized landscape, because media outlets can condemn him or support him," Lammert said.

European media, for the most, part share the same views, Cermak said, so there's a more uniform view of "The Donald," as he's also known - and that's one of exasperation.

"There is a bit of bewilderment that somebody who can say the outrageous things that he says is still regarded as a serious political figure in the States," he said. "I don't think there's much understanding for this in Europe or Germany."

Tsipras is no Trump

While "no political experience" is a frowned-upon background in Europe, in the US it can have a positive connotation, Cermak said. Americans have a soft side for people who are not "part of the establishment," in contrast to former First Lady Hillary Clinton; or to Jeb Bush, whose father and brother have both sat in the White House. 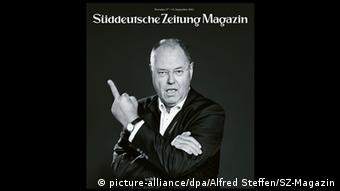 "We don't know the phenomenon of the unpolitical politician here in Europe yet," Lammert said. "We have populists like Jean-Marie Le Pen in France or Greece Prime Minister Alexis Tsipras, who attract a lot of attention with their personality, but they also have clear policies. Donald Trump is a whole other story."

Cermak can only think of one German politician who tried to be a little more colorful in recent years. Peer Steinbrück was the Social Democrats' candidate for chancellor and ran against Angela Merkel in 2013. In an attempt to "shock the political world," as Cermak put it, Steinbrück flipped the middle finger in a photo-based interview with German-wide daily "Süddeutsche Zeitung."

The gesture is considered obscene by some and childish by others - and it did not play well with fellow politicians or the wider German public. Steinbrück was far from the only problem the Social Democrats were dealing with at the time, but the stunt also didn't do anything to help his party.

Peer Steinbrück did not become Germany's chancellor. Donald Trump can still hold out hope for a happier ending to his story.

US real estate magnate Donald Trump has announced his candidacy for president in the 2016 election. He is the latest Republican to challenge for the party's nomination ahead of what is becoming a crowded primary. (16.06.2015)