US President Donald Trump has announced he will not meet North Korea's leader Kim Jong Un next month, due to "open hostility" recently expressed by Kim. The summit had been hailed a historic chance to disarm Pyongyang. 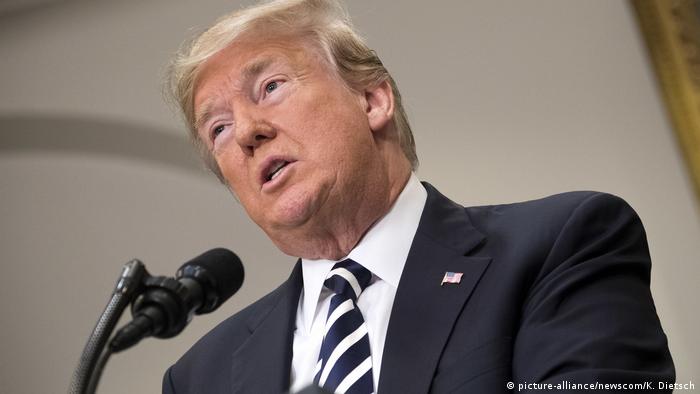 US President Donald Trump unexpectedly called off a summit with North Korean dictator Kim Jong Un on Thursday in a letter released by the White House.

The meeting, which was scheduled for June 12 in Singapore, was meant to solve the threat posed by Pyongyang's nuclear arsenal.

'The world is going backwards'

"(We) are trying to figure out what President Trump's intention is and the exact meaning of it," Yonhap news agency quoted presidential office spokesman Kim Eui Kyeom as saying.

UN Secretary General Antonio Guterres said he was "deeply concerned" by Trump's cancellation. Guterres stressed the efforts to rid the world of nuclear arms were in severe crisis and urged both parties to keep talking. The UN chief added that the "world is going backwards."

The UK said it was "disappointed" by Trump's move. "We need to see an agreement that can bring about the completely verifiable and irreversible denuclearization of the Korean peninsula and we will continue to work with our partners to this end," the spokeswoman for UK Prime Minister Theresa May told reporters.

US Secretary of State Mike Pompeo read out Trump's letter while appearing before US lawmakers on Thursday.

Pompeo reads out Trump letter: 'Inappropriate at this time'

The news of the cancellation didn't go over well in Berlin. Rolf Mützenich, a foreign policy expert for the junior partners in the German government, the Social Democrats, criticized the decision.

"The cancellation of the summit is regrettable, but it's been coming for days," Mützenich told Deutsche Welle. "Trump and his team have cavalierly ignored the way their public statements and assertions were perceived in North Korea. A topic as important as the relaxation of the military situation on the Korean peninsula desires professional and credible preparation."

Opposition leaders were even more scabrous.

"Trump's way of doing business has failed because his premature boasting about 'honorable Kim Jong-Un' has left him no room to save face and because he defined the maximum possible result, the denuclearization of North Korea, as a condition for negotiations," Green Party foreign policy expert Omid Nouripour told DW. "That was megalomaniacal and dilettantish.  I hope he hasn't destroyed the South Korean president's successful policies of détente."

Peter Beyer, Germany's Trans-Atlantic Coordinator, told DW: "We should encourage any attempt to peacefully resolve the conflict over the North Korean nuclear and missile programme through diplomacy and talks. At the same time, pressure must be maintained on the North Korean regime to open serious talks. While this is a Herculean task, our goal is still the complete, irreversible and verifiable de-nuclearization of North Korea."

High expectations for cancelled summit: Trump had been praised by South Korea, China, and numerous US allies for agreeing to meet Kim and discuss the denuclearization of the peninsula. The isolated North Korea commands a fully functioning nuclear arsenal and its leadership has boasted it can target any part of the US mainland.

North Korea's offending statement: Earlier on Thursday, Pyongyang slammed US Vice President Mike Pence as a "political dummy" for comparing them to Libya, saying his comments were "ignorant and stupid," and threatening to cancel the summit themselves.

In his letter, Trump signaled he was still willing to meet Kim some time in the future, while an unnamed White House official told Reuters news agency there was still "a backdoor that's open" if Pyongyang changed its rhetoric.

Later on Thursday, Trump also said it was "possible that the existing summit could take place," possibly on another date, and that he was "waiting" if Kim Jong Un was willing to engage. "Nobody should be anxious," he added.