Domestic violence rises in Turkey during COVID-19 pandemic | Europe | News and current affairs from around the continent | DW | 10.04.2020 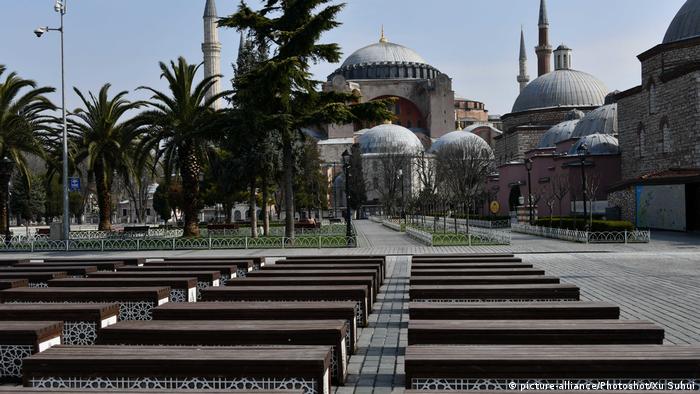 Turkey's government has introduced social isolation measures to slow the spread of the novel coronavirus. People older than 65 and younger than 20 are not allowed to leave their homes at all, and the rest of the population have been asked to stay in as much as possible.

Though there are no official figures, women's rights activists in Turkey say that there has been a considerable increase in cases of domestic violence during the lockdown. "There are significantly more people are calling our hotlines," said Gulsum Kav, the director of We Will Stop Femicide Platform. As a result of lockdown measures, she said, men are staying at home more than usual and women and children who are subjected to domestic violence cannot escape.

Increases in domestic violence have been reported across the world since the outbreak of the coronavirus pandemic and the imposition of lockdown measures. China, Spain, Germany, France, Canada and Australia are among the countries where the number of reports have grown.

According to an Italian parliamentary committee report, the number of calls to the national domestic violence hotline dropped by 55% during the week of March 8-15 from the same period in 2019. However, the report underlined the fact that the decrease in calls did not signify a decrease in violence: It merely meant that some victims were not able to call hotlines without being detected by their abusers because of the quarantine measures.

In France, where reports of domestic violence have risen by about 30% since the government announced a national lockdown, Kav said a system had been put into place to allow women to report abuse at pharmacies. If they are accompanied by their abusers, they can convey their situation in code. France's government also recently announced that it had reserved 20,000 hotel rooms for victims of domestic violence and that it had set up pop-up counseling centers in shopping hubs. Spain has put similar measures in place. Prime Minister Justin Trudeau has set aside tens of millions of dollars to support women's NGOs, shelters and sexual assault centers across Canada. In March, Australia's government allocated an additional US$100 million (€91.5 million) to tackling the issue.

"Although we have been calling for such measures and funds for a while, nothing has been announced," Kav said. "Nobody has told us why it is not possible to introduce steps to protect women, as well as measures to combat the spread of coronavirus."

Activists for issues that affect women have criticized Turkey's government for not introducing measures to counter the problem and protect victims. "Sixty percent of femicides are a result of domestic violence," said Selin Nakipoglu, a lawyer and activist with the TCK 103 Women's Platform, an umbrella group for feminist and LGBTQ+ organizations in Turkey. A report by police found that 72.8% of femicides in Turkey took place in apartments or housing complexes. According to We Will Stop Femicide, 21 such killings were reported in Turkey from March 11 to 31.

Read more: Germany’s Ethics Council and its role in the coronavirus crisis

Turkey is one of the signatories of the Istanbul Convention, the Council of Europe treaty to prevent and combat violence against women and other forms of domestic violence. The convention obliges states to take preventive measures and prosecute perpetrators. Though Turkey ratified the convention and put it into effect in 2014, the treaty is not always followed in practice by signatories. Additionally, in 2012 Turkey adopted Law No. 6284 to Protect Family and Prevent Violence against Women, drawn up with rights organizations to allow victims to file for restraining orders to prevent their abusers from approaching them.

The law is not always implemented in practice. Women's rights activists in Turkey are now calling for the authorities to take the laws seriously and ensure that women and children receive the necessary protection from violence during and after this lockdown period.

How to protect yourself with a face mask