German filmmaker Thomas Wallner's latest documentary, "The Guantanamo Trap," leaves lots of questions unanswered, which often feel like the act of an incompetent filmmaker. But in this case, just the opposite is true. 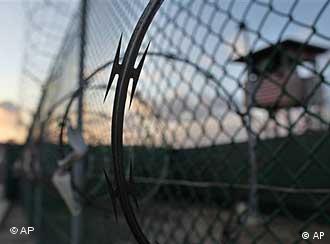 There is always more than one side to a story

The 90-minute film toggles between the stories of four people whose lives were forever altered by the infamous US detention camp. The result is a state of immobilization - the characters are unable to resolve their guilt, doubt and fear to forge a gratifying future or a greater sense of justice - which precisely underlines the controversy surrounding Guantanamo Bay.

Filmmaker Thomas Wallner knew he was going to make a film without resolve from the very beginning. Structurally, Wallner looks at his film as a sort of Shakespearean tragedy where all the characters lose in the end, bound to their past and its consequences, no matter how hard their strive to rectify it.

Admitting he initially was not enthralled by the history of the prison, Wallner told Deutsche Welle, "Guantanamo is a framing device for three intensely human stories about morality. The trap these very characters are caught in is symbolic of where Guantanamo stands today."

In October 2001, Murat Kurnaz, a Turkish citizen and legal resident of Germany, was arrested in Pakistan and sold to the US army by the Pakistani police for bounty. After five years as a detainee in Afghanistan and a prisoner of the Guantanamo Bay Detention Camp, Kurnaz was released and returned to his hometown of Bremen. The initial allegations that he was affiliated with the al Qaida network and the September 11th attacks dissolved into obscurity, leaving Kurnaz damaged by psychological aftershocks, stripped of his freedom and hardened by unanswered questions.

"The Guantanamo Trap" follows Kurnaz's story as it intertwines with three other characters. Diane Beaver, a former lawyer for the US Army's Judge Advocate General Corps, drafted a memo in 2002 that provided a list of legal interrogation techniques to be used against Guantanamo Bay detainees. In the wake of leaked photos of inhumane treatment of prisoners at Abu Ghraib in Iraq, the US government released Beaver's memo and pinned her as the architect of torture tactics.

As a Navy lawyer at Guantanamo Bay, Matt Diaz copied a list of prisoners and posted it to a human rights organization in New York, morally compelled to speak out against the atrocities he had witnessed at Guantanamo. His thanks came in the form of deafening silence from human rights defenders and a six-month prison sentence for defying his superiors and his government.

In Spain, criminal prosecution lawyer Gonzalo Boye, a victim of police torture himself after being sentence to 14 years in prison for allegedly assisting a kidnapping by a terrorist organization, has been working on a case against the Bush administration for unlawful detention and war crimes, including torture. In "The Guantanamo Trap," Wallner follows Murat Kurnaz to Boye's Madrid office, where the lawyer has summoned Kurnaz as a potential witness in his case.

But for Boye, "the most important part of the film is with Diane Beaver," he said. "I'm seeing that from the angle of a private prosecutor, thereby I can get a certain knowledge of this person, which is very important for me in terms of the accusation."

The traitor, the terrorist, the torturer

Together, the characters in the film form a comprehensive portrait of Guantanamo Bay - from those on the inside to those on the outside, from those who stood by it and those who are trying to destroy it. With this prism of perspectives comes the film's ability to turn stereotypes upside down: Heroes are not clear heroes, villains are not clear villains, and even the victim does not want to be a victim.

As a filmmaker, Wallner attempts to remain nonjudgmental, offering the perspectives of his characters without coloring them with his own opinions.

"There's no value in bringing my judgment to this particular situation," said Wallner. "It's more valuable to see what's going on in the characters' hearts and minds. Even if there's a contradiction between what they say and their actions, I think audiences are savvy enough to read those discrepancies."

For Wallner, the most important task with this film was finding the human dimension in his subjects. "All three of these characters were at some point made into monsters by somebody," he said. Diaz the Traitor, Kurnaz the Terrorist, and Beaver the Torturer.

"And I didn't want the film to do that," continued Wallner. "There is a distinction between a person being human, vulnerable and apt to mistakes, and then the moral decisions that they make, which are on a different plane and can be judged separately."

Hounded by the press and suspicious of the media, both Diane Beaver and Murat Kurnaz refused most offers to comment on their Guantanamo experience, except from Wallner. The filmmaker actually wrote a letter to Diane Beaver, promising her the opportunity to tell her story. As for Kurnaz, Wallner was drawn to him through his own personal experience.

The day after Bush was re-elected in 2004, while on his way to Oklahoma for another film shoot, Wallner was asked by US customs to provide biometeric information. He refused and was then interrogated, resulting in his name being included on the terrorist watch list for the next five years. Shortly after the experience, Wallner read Kurnaz's book, "Five Years of My Life: An Innocent Man in Guantanamo," and was intrigued by his story.

Wrapping up a small screening tour through Germany, along with Murat Kurnaz and Gonzalo Boye who were in attendance for discussion, Wallner is looking forward to showing the film to US audiences. It's currently on the festival circuit and will soon have an international television release to coincide with the 10th anniversary of the 9/11 attacks.

As for any advocacy the film might inspire in shutting down Guantanamo, Wallner hopes that at least his film will sharpen people's political views on the abuse of power. A fair enough statement for an ultimately fair film.

Fahim Dashty has been through a lot in his life. His anti-Taliban stance brought him close to death, and his critical journalism has forced him to close his paper. But he won’t be kept down. (09.08.2011)

Scroll down for a list of people, groups and terms used in connection with the 9/11 terrorist attacks and their consequences. (08.08.2011)

An Australian court has frozen all assets derived from the sales of former Guantanamo Bay inmate David Hicks' memoirs. Hicks was captured in Afghanistan after the 9/11 attacks and is referred to as the "Aussie Taliban." (03.08.2011)

DW feature: 9/11 and the global consequences