DNA tests prove that a skull venerated by many literature lovers as the "brainbox" of 18th-century German dramatist Friedrich Schiller actually sat atop the shoulder's of a very different man, a German official said. 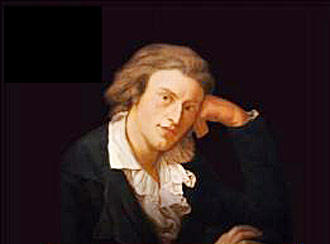 Schiller does not have any known living decedants

Genetic material was taken in 2006 from the skull, kept in a tomb in Weimar, central Germany, where Schiller and fellow author Johann Wolfgang Goethe lived, and compared to material from the graves of Schiller relatives. 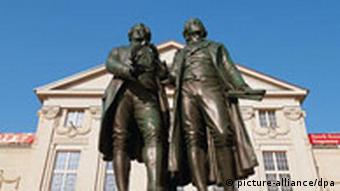 Schiller and Goethe struck up a friendship in Weimar

The skull was recovered from a royal courtiers' mass grave in Weimar 21 years after his death as a cult developed around him, and it was treated for 180 years as Schiller's, based on many points of resemblance to his appearance.

"The DNA analysis shows without a shadow of a doubt that this is not the author's skull," Julia Glesner, a spokeswoman for the Weimar Foundation which preserves the German Classicist heritage, said on Saturday, May 3.

Adding to the mystery is a controversy over a second skull found in 1911 in the same mass grave, regarded by some as Schiller's. But the DNA tests found it too belonged to someone else.

The Weimar Foundation sponsored the study in cooperation with the MDR public broadcasting corporation, triggering controversy over whether dead bodies should be exhumed for the sake of curiosity.

One Catholic priest, Wilfried Braun, refused permission for a relative to be exhumed, saying he could not perceive any useful purpose in the venture that justified disturbing the dead.

Now the foundation must resolve what to do with the bones of the "wrong" Schiller, whose identity remains unknown.

A three-day Goethe Institute symposium on the "Kulturnation" has kicked off in Berlin. DW talked to historian Konrad Jarausch about why Germans get so worked up about the idea of culture. (24.04.2008)

Apart from his extensive musical legacy, relatively little is known about Johann Sebastian Bach. A Scottish anthropologist and art historian have recreated the countenance of one of the world's greatest musicians. (01.03.2008)

The restoration of Germany's Dutchess Anna Amalia Library in Weimar has been completed three years after it was damaged by fire. The library, a UNESCO World Heritage site, reopens to the public on Wednesday, Oct. 24. (19.10.2007)

Do you think having a look at Schiller's skull would change your opinion of his work? Send us your opinion and please include your full name and country in your reply.