The 28 ministers agreed that airstrikes in Syria were understandable and blamed Assad for chemical weapons attacks. The EU reached conclusions despite diverging opinions on how to work with Russia in peace talks. 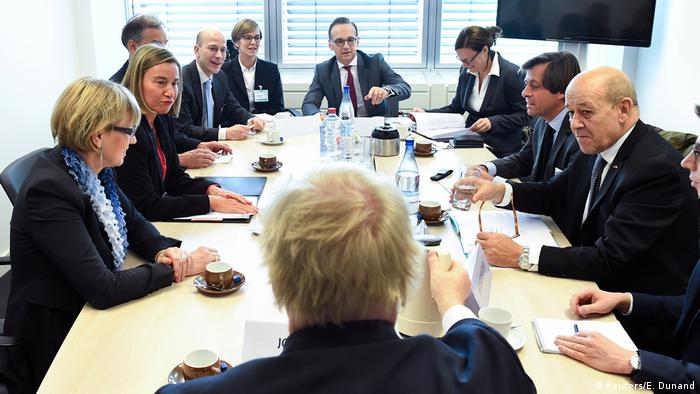 Foreign ministers from the European Union's 28 member nations met on Monday in Luxembourg to resolve increasing tensions with Russia and discuss how to revive the political peace process in Syria in the aftermath of the recent US-led airstrikes on suspected chemical weapons sites in Syria.

Despite the varying perspectives that exist among EU member nations over how to proceed on Syria following the airstrikes and the alleged use of chemical gas by Bashar Assad's government forces on civilians in Douma on April 7, the ministers agreed to support "all efforts aimed at the prevention of the use of chemical weapons."

The statement released Monday after the ministers' discussion said that the Syrian government of President Bashar Assad was responsible for the April 7 gas attack. "We strongly condemn the continued and repeated use of chemical weapons by the regime in Syria, including the latest attack on Douma," it read.

The statement also distanced the bloc from the possibility of broader military action, stating that the EU understood the joint targeted airstrikes "were specific measures having been taken with the sole objective to prevent further use of chemical weapons and chemical substances as weapons by the Syrian regime to kill its own people."

The statement also included harsh words for Assad-ally Russia: "The EU deplores the Russian-backed regime offensive which has caused devastation in Eastern Ghouta and calls for airstrikes to cease immediately." Along with Russia, the bloc called on fellow Assad backer Iran and Turkey, which sent forces into Syria's east earlier this year, to de-escalate hostilities and work towards a ceasefire.

The EU conclusions stressed that a political solution under UN auspices remained the only way to achieve a lasting peace. Before the meeting, various EU countries had suggested alternative talks could be started in light of deadlock in the UN talks.

Unlike the US, the EU said it would not impose further sanctions on Syrian officials with links to chemical weapons development at this time. However, the bloc "is ready to consider imposing further measures going forward."

The conclusions will serve as building blocks for next week, when the EU and the UN host a two-day conference in Brussels on the future of Syria and the region.

Falling in line with Mogherini

The published statement showed the unity that the EU member states were able to find upon coming together the day after individual countries had taken different stances.

The conclusions largely reflected remarks made previously by the EU's commissioner for foreign affairs, Federica Mogherini. Following the airstrikes, she had said that the EU is supportive of all efforts aimed at the prevention of the use of chemical weapons, though she did not go as far as to endorse the joint air attacks. The EU's top diplomat has repeatedly stated that a political, UN-led solution remains the only way to end the seven-year Syrian conflict.

Germany: Support, but no military involvement

German Chancellor Angela Merkel backed the joint airstrikes as "necessary and appropriate" but ruled out German military participation in Syria.

Foreign Minister Heiko Maas has insisted that a diplomatic solution remains the only option for lasting peace. However, over the weekend he said that "another format" is needed break the deadlock in the UN-led Syria talks.

Upon arrival in Luxembourg on Monday, Maas insisted that "whether you like it or not: without Russia you won't be able to solve this conflict." The ministers discussed ways to pressure the Russian government into working to bring the Assad regime to the negotiating table and the conclusion said the EU "calls upon the regime's allies" to exert influence over the regime.

Maas has said Assad cannot be part of the talks.

UK: strikes were successful but the war will go on

British Foreign Minister Boris Johnson said that the "overwhelming purpose" of his country's participation in the joint airstrikes was to respond to Assad's chemical weapons use and that there were no future plans for further strikes. "It is very important to stress (the strikes are) not an attempt to change the tide of the war in Syria or to have a regime change," he said upon arriving at the ministers' meeting.

However, in a prior interview with the BBC, he said that "if we say we're limiting our action to chemical weapons ... then of course it follows that the rest of the Syrian war must proceed as it will."

Both French President Emmanuel Macron and his foreign minister, Jean-Yves Le Drian, have said that the EU needs to convince Russia to work with the bloc in order to find a political solution to the Syria conflict.

While in Luxembourg, Drian said that the EU was "united at a very serious moment" in wanting to "prevent and dissuade against any use of chemical weapons."

France had positioned itself as a key international actor in the Syrian conflict. Macron has said he has convinced US President Donald Trump to stay engaged in Syria "for the long-term" while Le Drian had said that Paris would "take the initiative" at Monday's ministerial meeting. 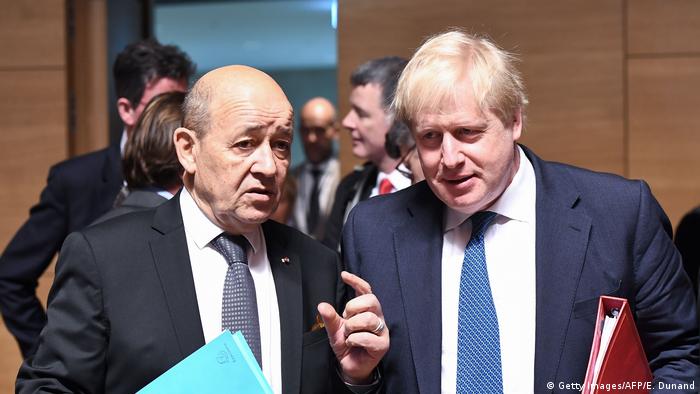 Netherlands: UN is the only way

Dutch Foreign Minister Stef Blok disagreed with Maas' weekend suggestion that an alternative to Geneva talks were needed. "We should keep on pushing for a solution through the UN Security Council. It's the only way forward," he said as he arrived in Luxembourg.

Prior to the meeting Monday, Austrian Foreign Minister Karin Kneissl said her country was ready to offer Vienna as a location for further UN-led Syria peace talks, she told Austrian broadcast Ö1 from Luxembourg. However, she also had said mobile bilateral talks could be held in various cities, including Moscow and western capitals, though such discussions would need to be commissioned.

Kneissl announced she would meet her Russia counterpart Sergey Lavrov in the Russia capital Thursday, where she would look to find out more on Russia's diplomatic position in Syria.

Greece: End the war to allow refugees to return

The Mediterranean country has struggled to deal with the waves of refugees fleeing violence in Syria. While the country's foreign ministry did not outright endorse the airstrikes, it said after the strikes that it "unreservedly condemns the use of chemical weapons and supports efforts to eliminate them." The ministry also said a sustainable political solution was needed to "end the war ... [and] allow the return of millions of refugees."

Monday's conclusions on Syria included the EU confirming its commitment to support Syrian's neighboring countries who have taken in refugees.

German Foreign Minister Heiko Maas has said he is hopeful the US-led airstrikes on Syria will convince Russia to open dialogue with the West. Maas also blamed Russia for a recent cyber attack on his ministry. (16.04.2018)

Russia condemns US airstrikes on Syria as world reacts

The ally of Syrian President Bashar al-Assad has slammed the US for its joint airstrikes in Syria, as has Iran. Though the UN called on participants in the regional conflict to show restraint, others welcomed the strike. (14.04.2018)